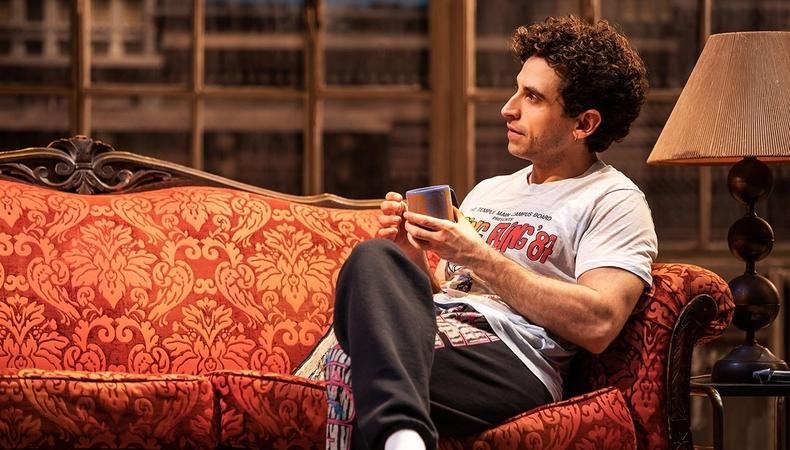 Brandon Uranowitz doesn’t mince words: He is done with this notion that actors who have been in musical theater productions cannot also do straight plays. But he isn’t just talking about it—the two-time Tony nominee is proving it. Just after wrapping his run in “The Band’s Visit” (a musical), Uranowitz began rehearsals for “Burn This,” the Lanford Wilson drama starring Adam Driver and Keri Russell, that also marks Uranowitz’s first time in a straight play on Broadway. Uranowitz, who just received a 2019 Tony Award nomination for his work, hopped on the phone to discuss the frustration he feels around the “musical theater actors are inferior” stigma, and how he’s mined his character Larry’s jokes for humanity.

How did you come to be involved with “Burn This”?
You mean the luckiest thing that's ever happened to me in my life? I got this email from my agent saying, “Would you be interested in being part of the table read of Lanford Wilson’s ‘Burn This’? It's just for [director] Michael Mayer and the Lanford Wilson Estate and a couple producers. Adam Driver is playing Pale and Keri Russell will be reading Anna.” And I was like, “Oh cool, I wonder what celebrity who was playing Larry had to drop out.” But what was I going to do, say no? That opportunity to do the table read in itself was a dream, so I was like, “Oh fuck, I'm gonna hunker down and do the work and read the play as many times as possible,” even though I just assumed that some celebrity was already attached. But I went and I had done all my prep work and I was like, “Wow what a cool day. I'm so glad I got to do that,” and I sort of let it go. And then the next day, my manager and agent called me and were like, “Hey, so you're gonna get an offer to do Larry in ‘Burn This’ starting in February of next year.” It was totally wild. It never happens like that.

READ: Why Starting in the Theater Prepares You for Anything

Tell us about this guy you play, Larry.
“Burn This” is about four people coping in the immediate aftermath of the death of someone very close to them. Larry is the only living gay character in the play, and it’ s fascinating to me because I think his function to the play when it was written in the ’80s is a little bit different than it is or should be now in 2019. He definitely could have been labeled as the comic relief, as “guy who comes in for humor and laughter”—and that still holds true. But what’s different is he’s not a novelty in the storytelling universe anymore. In the ’80s, there wasn’t much of a reference point for an out, proud, fearless gay man living his truth. Now, I think of him as the pillar of rationality and reality. He offers a shoulder to cry on and he’s a helper. It’s been really fun to get down to the truth of his humanity and how he feels and what his actual opinions are and what his relationships to the people onstage are, as opposed to only making people laugh.

READ: Keri Russell on Her Broadway Debut: I'm ‘Not Going to Throw Up’

You’re known to Broadway audiences for musicals more than plays. Has a straight play been on your must-do list?
Very much. But seriously, here’s what’s interesting to me, and also a little bit frustrating: As far as I’m concerned, doing a play and doing a musical is really the same thing, except one has songs. Our goals to tell a story as authentically and truthfully and with as much humanity as possible is exactly the same. Plays and musicals are essentially just using different doors to get into the same room, and it’s always frustrated me that, because I have a history of doing musicals, my skill set is [seen as] either different or inferior to the skill set required to do a play. We have the same skills and I would offer that maybe there’s actually one extra, which is the ability to sing. So I sort of wanted to do a play not just because it’s different and because singing gives me insane anxiety, but because I want to prove that, given the opportunity, I can show you the skill set is exactly the same and I’ve just been using those skills in a different form with music.

I was going to ask if you feel as though there’s a stigma around musical theater actors doing straight plays.
It drives me completely insane. Katrina Lenk [of “The Band’s Visit”] is one of the most incredible actors I have ever witnessed and will ever see—and she’s in a musical. I just feel like it’s lazy and I feel like it’s judgmental to assume that people in musicals can’t do what other people can do. Just because I don’t have an MFA from Juilliard, doesn’t mean that I am any less skilled.

Did you find anything different in your approach or preparation for this play?
I approached it from the get-go [thinking], I don’t want to play a trope. I think that’s boring and it’s not helpful, especially to the gay community. We’re passed just being represented on stage; we now need to be onstage with an equal weight as everyone else onstage. I was trying to be as truthful as possible, and that was also something we really dug into with Michael Mayer, but it was very difficult to push through in the rehearsal room. When you’re doing it over and over again for the same people, it’s no longer that funny. Everyone’s expecting it and what makes comedy work, besides timing, is the element of surprise, and it wasn’t surprising anyone anymore. It got stale, which was very difficult to accept because you feel like you’re no longer funny at all; you feel like you're failing. But what it forced us to do was dive even deeper into every single moment and what the goals in terms of relationships and actions and motivations were. What the ultimate goals of those jokes were, and what the ultimate motivations of those one-liners were, and that got us closer and closer to the truth. So while it was difficult to push through because you feel totally unfunny and like a shitty actor, in hindsight, I’m very grateful for it because I do feel like we mined every bit of humanity from the writing in those jokes, that could just be seen on the surface as zingers.

What’s your elevator pitch for why audiences should come see “Burn This”?
There is a lot of pressure on artists right now, especially in this political climate. The art that comes out of our politics right now is very important and I’m so excited to see what is created from this dark moment in our history. But what I love about our play is that it’s not particularly zeitgeist-y; it’s just a great play and a wonderful night in the theater. I think “What the Constitution Means to Me” is the most important thing on Broadway right now, and should be required viewing for everybody—but once you’ve seen that, then come see “Burn This,” because you can let it go for a second and you can get in touch with what it means to be a human and what it means to be a person dealing with something—and relationships and gay people and people experiencing something very painful and deep. It checks all the boxes for me.

Want more theater news and advice? We've got it!

Casey Mink
Casey Mink is the senior staff writer at Backstage. When she's not writing about television, film, or theater, she is definitely somewhere watching it.
END_OF_DOCUMENT_TOKEN_TO_BE_REPLACED