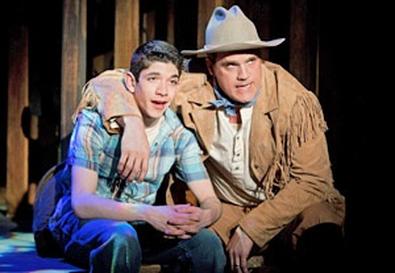 Photo Source: Joan-Marcus
The elements are all there for a moving little musical, but "The Burnt Part Boys," jointly presented by Playwrights Horizons and Vineyard Theatre at the former's Off-Broadway home, is buried in a cave-in of sentiment. Set in 1962 in rural West Virginia, it tells the story of 14-year-old Pete Twitchell, whose father and 11 other miners were killed in an accident 10 years earlier. When he learns that the mountain that collapsed on his dad—called "the burnt part" by the townspeople—is to be reopened for business, Pete sets out on a desperate quest to prevent defilement of his father's grave by blowing up the entrance with dynamite stolen from his older brother, a newly promoted foreman for the mining company his father worked for. Accompanied by his nerdy best friend Dustin and the tomboyish Frances, Pete makes a "Stand by Me" journey into manhood and is visited by the fantasy figures of Davy Crockett, Jim Bowie, and Sam Houston from his favorite movie, "The Alamo."

Forget the incredible suspension of disbelief required to buy this kid's being able to purloin the explosives and the superhokey ending in which all involved receive a ghostly visitation and miraculously survive a disaster. There is potential for an honest examination of a boy growing up without a father and the effects of a tragedy on a town and a family. But book writer Mariana Elder overplays her hand, drowning her script in sentimentality and having the characters speak in mannered Southern-fried phrases that come across as failed imitations of Tennessee Williams and Eudora Welty. Chris Miller's music has a welcome country twang, and lyricist Nathan Tysen strives to avoid the genre's clichés, but he gets trapped in them too often.

Director Joe Calarco cleverly uses the entire mainstage space as well as ladders on wheels and chairs to convey the sense of a hike through mountainous territory. He's aided by Brian Prather's rough-hewn set and Chris Lee's ingenious lighting to create the backcountry setting.

As Pete, young Al Calderon carries the weight of the show on his teenaged shoulders and does his best to handle the burden with professionalism and grit. Molly Ranson's Frances is similar to hellion girls seen in the novels of Truman Capote and Carson McCullers, but Ranson brings out the familiar adolescent ache with a heartbreaking clarity. Noah Galvin steals the show with an underplayed rendering of the misfit Dustin. Charlie Brady, Andrew Durand, and Michael Park have to take a back seat as the adults, but they display fine vocals and strong limning.