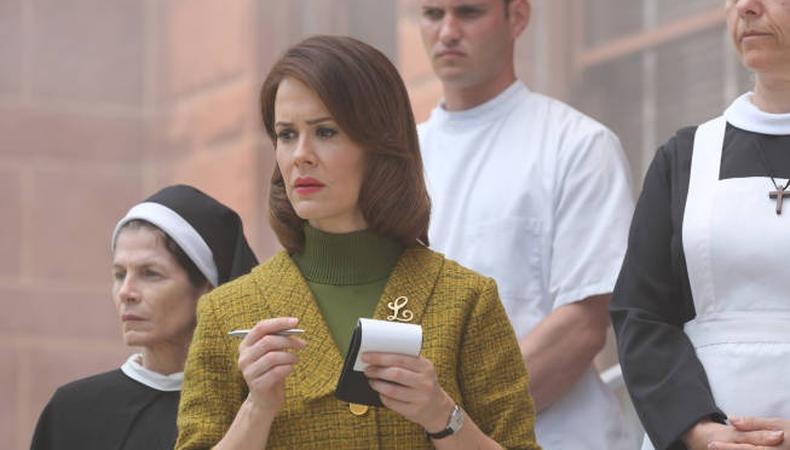 Over the course of “American Horror Story: Asylum,” Sarah Paulson’s Lana Winters was locked in an insane asylum, raped, escaped a serial killer, survived a car crash, tried to give herself an abortion, participated in a demented, hallucinatory singalong to “The Name Game,” escaped a serial killer again, and shot and killed two men. Oh, and she aged from 30-something to 75. Paulson says she was surprised that Lana became the heart of the show, but viewers understand that Ryan Murphy had no choice when faced with a performance this nuanced, memorable, and brilliant. And Emmy nominators rewarded her as well, with a nomination for outstanding supporting actress in a miniseries or movie.

Last year, we spoke about your Emmy nomination for “Game Change,” and you had the most amazing understatement when I asked about Season 2 of “American Horror Story.” You said, “I think you’ll be pleased about this year. I have a little more to do.”
That was the understatement of the year! [Laughs]

At that point, what did you know about Lana? What had Ryan Murphy pitched you?
He pitched it to me over dinner, and he said, “Your name is Lana and you’re a reporter and you smoke cigarettes and you’re very ambitious and you’re a lesbian.” And then he said, “And you do have to stay at the asylum.” That was all I knew when I said yes. And I think it’s an enormous testament to the faith you have in Ryan Murphy because I’ve never said yes to a project before without reading the script. You have to really trust him. And when I spoke to you, what I knew was through episode 4, which was all through electroshock treatment, Wendy being killed, and my aversion therapy. I didn’t know anything beyond that. But that in itself was enough! The aversion therapy especially was very hard to do! And to read on paper that I was going to put my hands down my pants while holding a male member’s member?

What was particularly thrilling about Lana is that she became the show’s heart.
It was the biggest surprise to me. I didn’t know that was going to happen until episode seven. When I was in Thredson’s lair? I thought I was done for. It’s a show about an asylum, and I knew they couldn’t keep me there indefinitely as his prisoner. And I had no idea how they were going to get me back to the asylum. That’s why I’m not a writer because I never would have come up with putting me in the car with the one crazy person who would blow his brains out and send me back to the hospital. It was that perfect horror thriller suspense thing. Anything terrible that can happen to her did!

At that point it was like, “Give this gal a break!”
I think Ryan knew, once all that was happening, we had to have her be the hero because you can’t have gone through all this with her and not see her make it through.

One of my favorite things that Ryan Murphy said about the season was when people complained that Lana was turning into a bitch and he said, “After what Lana went through, if she wants to throw on some lip gloss and go on fucking Dick Cavett? No, I don’t think she’s horrible at all.”
[Laughs] I know some people didn’t want to see someone they had fallen for kind of become this narcissistic, fame-hungry girl, but you have to remember, at the beginning all she wanted was to be taken seriously as a writer. And she did try to become an investigative journalist; that didn’t work out but she became Barbara Walters and that’s awesome! And she did bring Briarcliff down and she brought down the Monsignor. I really think the writing on the show was so wonderful and I really wish we had gotten some nominations for writing and directing.

I was going to ask about working with director Alfonso Gomez-Rejon, who directed your biggest episodes.
I worked with him a lot and he’s quite frankly one of the great filmmakers. He is so extraordinary. I love that everything he does takes more time. We’re here for more hours, eventually we all get a little stir crazy, but you’re willing to do it for him because the end project is so worthwhile and he’s going to step up what was already great on the page. I didn’t know how to play Lana when Lana came out of the institution. I had been playing Lana in peril for so many months and when I went and got a hairdo and control top pantyhose, I didn’t know what to do. I really remember looking at Alfonso and saying, “I don’t know how to play this,” and he was so helpful in getting me behind her newfound strength. And because he shot the episode where I had my second aborted abortion, he’d been my guide through all of that. By the time I got to the end and I’m a 75-year-old woman faced with killing my own son, I felt very safe with him.

While everyone else was really falling apart in the last half of the season, Lana was coming into her own. Any favorite moments for her?
As an actor, I loved the challenging moments. The stuff in Thredson’s lair I liked doing because I loved acting with Zach [Quinto] and we have such an intimate relationship we could go to some dark places with each other with full confidence. The thing that was hardest and the thing I was most proud of was 75-year-old Lana. I just didn’t want to get it wrong. I wanted my voice to be lower because she’d been smoking for 40 years. I wanted so much of my physical life to be altered and to still be Lana. So it was a challenge to have her wit and sharpness of mind and still have physical communications of how far she’d traveled. Watching oneself is always hard and not hating it is a victory!

Did you keep that “L” pin?
I did keep it! I am now going to take it with me to the Emmys and hope and pray I will be able to ascribe this L with a lot of power. And if I don’t win, it will still be very powerful to me

And finally, you know I have to ask: What can you spill about “American Horror Story: Coven”?
I can tell you I’m here in New Orleans. I am reading a book about witchcraft in my personal life. But I tend to read it in the day because who wants to be the one reading a book about witchcraft at midnight in New Orleans? That’s just asking for some spooky shit I don’t need in my life.