What Does a ‘Big Break’ Actually Look Like? These 8 Actors Tell Us 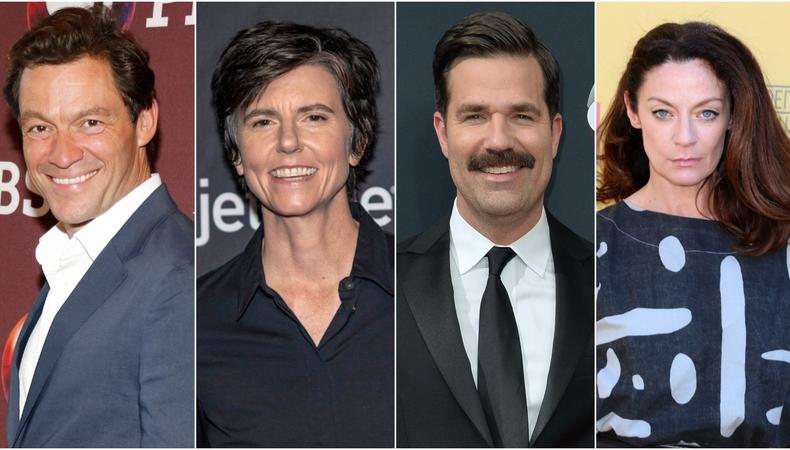 After years and years of struggling, how do you know when you’ve finally “made it”? What counts as a big break? For that matter, how do you even measure success in an industry where even getting steady work can be a feat? It can be hard for actors to determine when they’ve really broken through to both audiences and producers. However, once you do, your whole life can change, with challenges shifting, new problems arising, and old worries disappearing in the rear-view mirror. Here are eight actors on the point in their careers where things started falling into place.

Rob Delaney, “Catastrophe”
“The big break, for me, was really just being able to pay the bills through entertainment. Because that’s a much bigger leap…[than going from] being able to pay rent through entertainment to awards and stuff like that. In 2010 when I got hired to write on the MTV show ‘Ridiculousness’...that would be my big break because, from that moment forward, I paid my bills with nothing other than money I made from being funny or writing for TV in some capacity.”

Brian d’Arcy James, “13 Reasons Why”
“It depends on how you define ‘big break.’ There was a break for me that was really important for me…. I had two big musicals under my belt and I really wanted to try to be in a play because I wanted to do plays as much as I wanted to do musicals. I auditioned for a play called ‘Public Enemy.’…I’ll never forget what [casting director Laura Richin] said: ‘Sometimes musical theater performers can be pigeonholed.’ But she contended that people who are musical have a great understanding of rhythm, a great understanding of dialect, they can just hear things in a way. And she allowed me to come in and audition and get that play that I wanted to do.”

Michelle Gomez, “Chilling Adventures of Sabrina”
“I wasn’t getting any roles; I hadn’t grown into my face yet. I hadn’t grown into who I was and what I had to offer yet. I was kind of weird looking and I had a bad attitude. Who wants to hire that? One casting director saw something for me. I went out for a one-line role in a show called ‘Green Wing,’ and I ended up being featured and I found my way in that show.”

Dominic West, “The Affair”
“They were looking for someone to play McNulty, the lead [in ‘The Wire’], and they were down to their last two weeks before the pilot was due to shoot. And I sent a funny tape in—it was funny because I was reading on my own and pretending to listen to answers that weren’t on the tape. And they thought it was so funny they flew me over to meet them.”

Russell Hornsby, “Creed II”
“[In the year 2000,] right around pilot season, which is January [and] February...I got asked to come in for an audition for a TV show called ‘Gideon’s Crossing.’ I go into [casting director] Mali [Finn]’s office, and she calls me in and she says, ‘Hey, have a seat,’ and we proceeded to talk for 45 minutes. She asks me who I am, where I’m from, what I like to do. She got to know me. This was my first real audition in Los Angeles. She made me feel like I mattered. Then she said, ‘You’re going to come back in a few days, and I’m going to introduce you to the show creator. You have a good chance of getting this.’ I was 25 years old. I ended up getting that job. It went to series for a season, and it was great.”

Simu Liu, “Kim’s Convenience”
“I thought that when I booked my first TV role that it was the biggest deal in the history of big deals. And I only had two lines! I would pop in and say, [in an accent] ‘Inspector. You have a call from headquarters’— because it took place in Hong Kong. So I was like, ‘Yes! I made it, this is awesome!’ And then I woke up the next day and was like, ‘OK, what’s next?’ ‘Blood and Water’ was a big one for me…. I ended up getting my first series regular role there. It debuted on a tiny Canadian channel, nobody watched it, but at the same time…[w]e ended up getting nominated for a bunch of awards in Canada, so that helped boost my profile a little bit and helped me get swept up into ‘Kim’s.’ ”

Jeanine Mason, “Roswell, New Mexico”
“It’s all little breaks. I did not think I was walking into this pilot season to land a show that I would be the No. 1 of. But sometimes you need people to see it in you to really claim it for yourself. ‘So You Think You Can Dance,’ that was my first job when I was 18. That was a baby break. Getting ‘Grey’s [Anatomy],’ that was a baby break. They all line up to put you in a position to get a job that can really change the way you’re seen by a significant number of people in the industry.”

Tig Notaro, “Instant Family”
“Most times, there’s not any one thing that is gonna make or break me. It’s a combination of things that will move me forward or pull me back. I think that that’s good to remember, because things can seem so terrible or so great, and it’s just potential momentum to go in either direction. [One thing won’t take you down] or even raise you up because you still need to have either momentum. You can get your big break, but if you have no experience behind you, then that big break isn’t going to take you anywhere.”