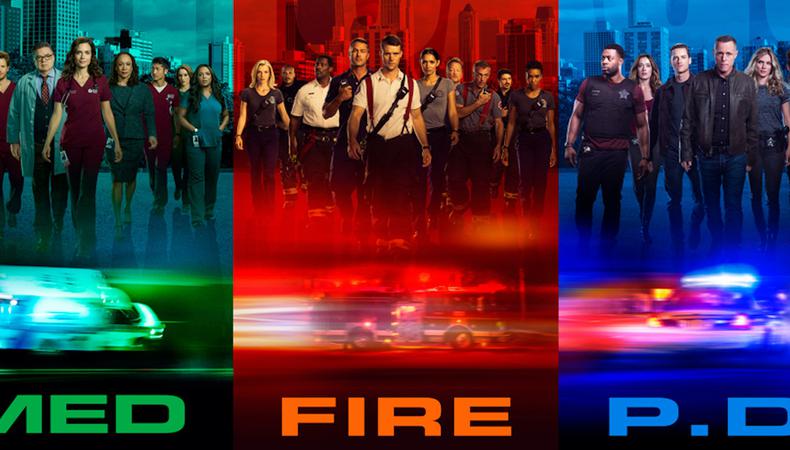 NBC’s Chicago franchise—also called One Chicago—consists of three interconnected shows about first responders in the Windy City: “Chicago Fire,” “Chicago P.D.”, and “Chicago Med.” The action-dramas explore the professional and personal lives of the firefighters and paramedics of the Chicago Fire Department, the officers of the Chicago Police Department, and the doctors and nurses of Gaffney Chicago Medical Center.

In early 2020, NBC renewed each show for three more seasons before COVID-19 halted productions across the country. At the time, “Fire” was in its eighth season, “P.D.” was in its seventh, and “Med” was in its fifth. Production and air dates have not been announced due to the ongoing precautions taken with COVID-19.

The Chicago franchise was created by Michael Brandt, Derek Haas, and Dick Wolf, the mastermind behind NBC’s “Law & Order” franchise. The three also serve as executive producers on the series, which all film in Chicago, Illinois. “Chicago Fire” filmed during pilot season in 2012, and the series premiered on Oct. 10, 2012. “Chicago P.D.” began filming in 2013 and premiered on Jan. 8, 2014. “Chicago Med” began filming in spring of 2015 and officially premiered on Nov. 17, 2015.

Backstage has had casting calls for “Chicago Fire,” “Chicago P.D.”, and “Chicago Med” in the past and while there are none right now, keep an eye on Backstage for future opportunities to join the series once filming resumes. You can still find other productions that are worth checking out if you love the NBC franchise.

Love NBC’s “Chicago” franchise? Play a hero on one of these projects casting now.

Throughout its first eight seasons, “Chicago Fire” has starred:

Throughout its first seven seasons, “Chicago P.D.” has starred:

Throughout its first five seasons, “Chicago Med” has starred:

Jonathan Strauss casts all three series in the Chicago franchise. Based in New York City, Strauss is also known for his other work with Dick Wolf, including “Law & Order: Special Victims Unit” and “FBI.”

One of the casting directors at Jonathan Strauss Casting, Philip Huffman, shared with Backstage that a typical episode of a procedural show like “Law and Order: SVU” or a show in the Chicago franchise might have up to 20–30 roles outside of the main cast. Although many of the roles are cast for just one episode, there is the potential for some of the characters to return for several episodes throughout the season or even the run of the show.

You can expect a few rounds of auditions if you are called in for a role on one of these shows. You might be pre-screened through an audition with the casting team if you’ve never auditioned for Strauss’s office before or you’re trying out a new type of role. If the office thinks you might be a fit, you’ll move on to a producer session. In a producer session, you can expect to read in front of an executive producer, the CD, and a writer. Casting happens quickly, so once the top creative team has the casting selects, offers will go out when the shooting schedule is established.

Huffman also notes that having representation isn’t a requirement to get called in for one of these roles. In order to be memorable, make sure you’re flexible in the audition room and you can make even jargon or seemingly insignificant dialogue sound natural. And remember, these shows are ongoing and full of opportunities, so if you don’t get one part, you still have the chance to win another!

It’s not just about the physical aspects: “The physicality is important, but it’s not the only thing that’s important. These characters are defined by their feelings and unspoken emotions. They have to be believable within all the demands: that’s the hardest thing to find.”

Chemistry is key: “Relationships, back-stories, subtext: these are the things an audience gravitates to. How these people relate to each other is a work in progress that grows as it would in life. Chemistry is very important.”

How to Audition for “Chicago Med,” “Chicago Fire,” and “Chicago P.D.”

Though there have been no public casting calls for lead roles, that doesn’t mean we won’t be seeing new faces when these three series return.

Since “Chicago” franchise shoots in Chicago, it’s helpful to be local to the area. Because background work often does not include relocation or travel stipends, being a local hire is crucial for getting repeat work as an extra. For more information on what it means to be a local hire, click here.

Love NBC’s “Chicago” franchise? Play a hero on one of these projects casting now.