What Is a Green Screen? Everything Filmmakers Should Know 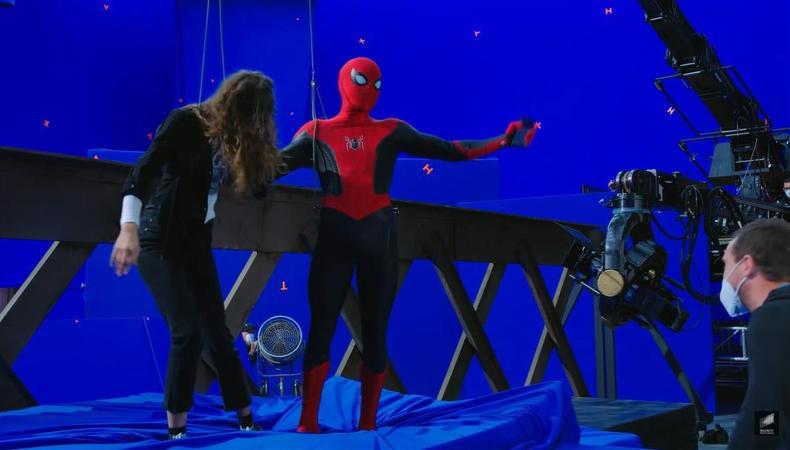 You don’t have to be a filmmaker to be familiar—or at least think you’re familiar—with the concept of a green screen. From filming epic superhero battles to creating fantasy worlds to reporting the weather, a green screen is an invaluable tool that enables viewers to see whatever directors want them to see without having to actually film that thing in real life. But there’s a lot more to the process than just swapping out backgrounds. Keep reading to learn more about what a green screen is, how it works, and when to use one.

What is a green screen? 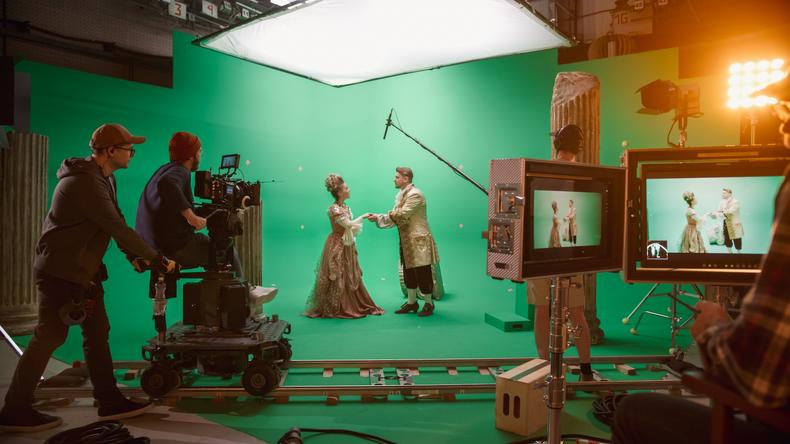 Chroma key screens—more commonly known as green screens—are tools that enable filmmakers to insert visuals into a scene by replacing certain color hues, or chroma ranges, in an image.

Believe it or not, chroma key screens date all the way back to the 1930s—and even to the late 19th century, if you include their predecessors. The first filmmaker to use a rudimentary version of the technique was George Albert Smith in 1898, who utilized black draping and double exposure to layer in additional elements to his moving pictures. Five years later, Edwin S. Porter used double exposure to add background images to the windows in the first narrative silent film, “The Great Train Robbery.” But it wasn’t until the 1930s that RKO Radio Pictures developed a method of using a blue screen to add supplementary images. Larry Butler won an Academy Award for best special effects for his use of blue screen in 1940’s “The Thief of Bagdad.”

Chroma key compositing continued to evolve over the following decades, as filmmakers refined the blue screen process and experimented with new technologies. In 1964, “Mary Poppins” had live actors enter a cartoon world using the sodium vapor process (also known as yellow screen), in which performers are filmed in front of a white screen lit by sodium vapor lights on the chromatic notch between red, green, and blue.  In the 1970s, television news stations gradually replaced blue screens with green. In 1980, Richard Edlund created a device called a quad optical printer for “Star Wars: Episode V – The Empire Strikes Back,” which streamlined the compositing process, earning he and his collaborators a special achievement award at the Oscars.

Today, chroma key is used extensively in everything from superhero blockbusters to Zoom calls. Green screen technology allows filmmakers to insert actors into any location they desire, both real and computer-generated, without ever leaving the studio. The use of green screens also enables actors to film separately from their scene partners, with performances getting composited into the same location in postproduction. This helps simplify logistics and cut costs for large-scale projects.

How does a green screen work? 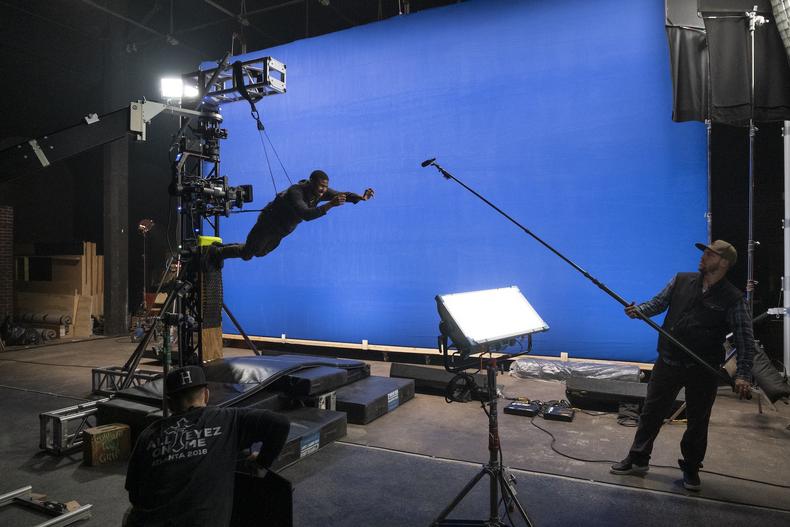 Behind the scenes of “Raising Dion” Credit: Steve Dietl/Netflix

The premise behind green screens is fairly straightforward: First, filmmakers shoot against a solid-color background (typically blue or green). Then in postproduction, visual effects artists tweak that color until it becomes transparent. At this point, background footage and other add-on material can be edited in. While the earliest filmmakers to use chroma key technology had to physically place cards over the camera itself based on which parts of the film they wanted exposed, today, editors remove and replace colors digitally.

Does a Green Screen Have to Be Green?

Green and blue are most frequently used for chroma key compositing because they don’t have any shades in common with natural human skin tones. However, when using a green screen, it is important that nothing you want to keep in the foreground shot—such as an actor’s wardrobe—is the same hue as the background color. In the unfortunate event that a performer’s clothing matches the background, parts of their body may be rendered transparent once that color is removed. This is one of the reasons why green screens eventually replaced blue: Television weather presenters tended to wear blue suits, and it was much easier to change the background color than risk the anchors’ bodies disappearing.

Green produces the cleanest key because the human eye (and the lens in a camera) is most sensitive to green wavelengths. However, there are some occasions when you might want to go with a blue screen instead; green is more reflective than blue, making it a great choice for daytime shots, but less desirable for night scenes. If you’re shooting in low light or at night, you may want to opt for a less luminescent blue screen.

Green screens are a popular tool in modern filmmaking, but they also have a number of other everyday applications in our increasingly digital world. They can be used to change out your background in Zoom meetings and Twitch streams; some social media platforms, like TikTok, have effects you can use to swap out your background without a physical green screen—although the quality isn’t nearly as good as what you’d get with an actual screen.

Why should you use a green screen? 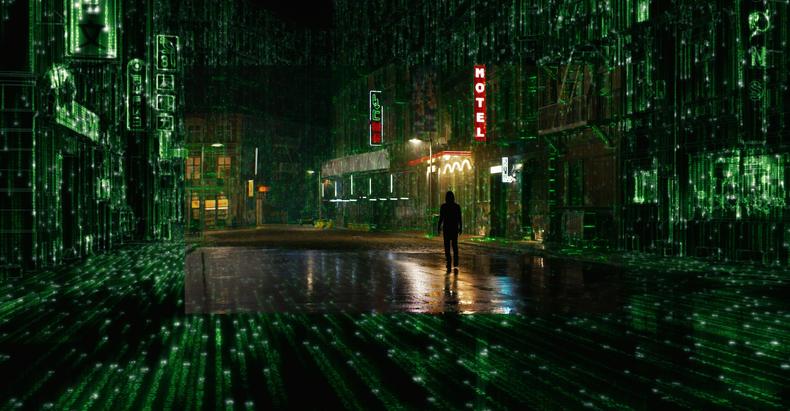 Green screens open a number of tantalizing doors for filmmakers. Dealing with tight actor schedules or limited budgets that make on-location shooting a nonstarter? No problem! Green screens allow you to film in a studio—or anywhere that allows for a solid-color background—and then add the background later. Chroma keying also enables creatives to more easily work around casting conflicts, such as when two major players can’t be present at the same time.

Shooting against a green screen can save time and money, cut down on travel costs, and simplify set creation. It also eliminates the risk of weather delays or external noise, and it doesn’t require filmmakers to plan daytime or nighttime shots around the sun’s position in the sky.

All that said, there are common pitfalls of using a green screen that filmmakers need to be aware of. Matching the lighting of your foreground and background shots can be tricky, especially if your scene is set outdoors. Unbalanced lighting between your background and foreground will make the scene look artificial, which can take audiences out of your film no matter how compelling the writing and acting is. While using a green screen is definitely cheaper than traveling the world to film on location, fixing a rushed or low-rate chroma key job can also be an expensive and time-consuming process.

How to use a green screen 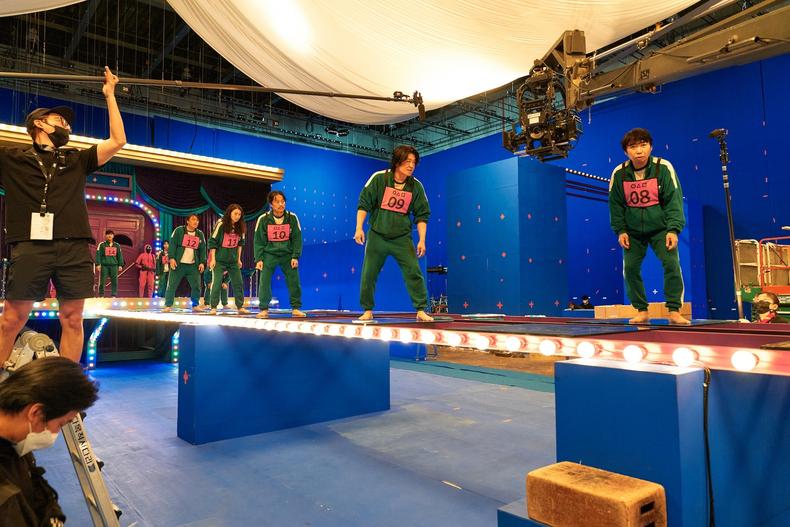 Behind the scenes of “Squid Game” Credit: Noh Juhan/Netflix

Once you've set up the green screen (which can easily be purchased from a number of online retailers, including Amazon), you’ll want to pay particular attention to your lighting—specifically that it’s consistent between your foreground and background footage. For example, if your background is lit by bright sunlight but your studio footage has dimmer lighting, it will be obvious to viewers that you captured your actors separately from the background.

You’ll also want to make sure the lighting doesn’t cast shadows. Light should be soft and come from several angles, so that your screen shows up as a single color and not various shades of green. Shadows make the keying process messy, as it becomes difficult to cleanly isolate your actors.

Once your lighting is in place, you also need to calibrate to your camera setup, matching the depth of field in both the foreground and background. Consistency is essential to produce a believable final composite. Taking time up front to meticulously coordinate the camera distance and lighting between your background and foreground will pay off once you see how it all comes together.

And of course, always double check that your actors’ costumes don’t match the screen color, lest they wind up with missing body parts in postproduction.

Once you’ve filmed your background and foreground footage using a green screen, it’s time to edit it all together using your favorite green screen software. There’s a large selection of video editing software on the market today, all of which offer green screen compositing options:

Once you get the hang of it, the only limit to what you can film using a green screen is your own imagination.