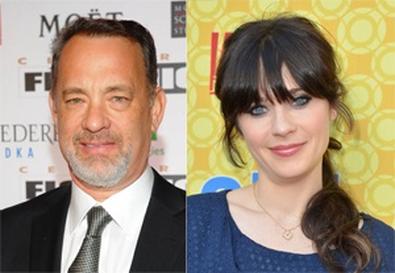 Photo Source: Getty Images
Two stars are set for new Broadway productions as the 2011-12 season ends. According to the New York Post, Tom Hanks has signed to headline "Lucky Guy," Nora Ephron's play about Pulitzer Prize-winning columnist Mike McAlary, which is scheduled to play a limited run at a Shubert theater starting in January. "Lucky Guy," not to be confused with the flop country-western Off-Broadway musical of the same name, covers McAlary's controversial career including a libel suit against him and his coverage of the Abner Louima police abuse case which won him the Pulitzer just months before he died of colon cancer at 41. An earlier version of the script called "Stories About McAlary" was given a industry reading with Hugh Jackman in 2010.

Zooey Deschanel, star of Fox's hit sitcom "New Girl," will play country-music icon Loretta Lynn in a Broadway musical version of "Coal Miner's Daughter," the 1980 biopic starring Sissy Spacek. The announcement was made from the stage of the Grand Ole Opry with Lynn and Deschanel performing the title song. (The announcement and performance paralleled the 1979 appearance of Lynn and Spacek at the Opry in 1979 to publicize the film.) A creative team and dates for the show will be forthcoming.

Yet another Broadway production about a real-life celebrity does have a theater and dates. "Chaplin," depicting the career of the legendary silent-film comedian will begin previews at the Ethel Barrymore Theatre (currently housing the limited run of "Death of a Salesman") on Aug. 21 in advance of a Sept. 10 opening. The score is by Christopher Curtis and the book is by three-time Tony winner Thomas Meehan ("Annie," "The Producers," "Hairspray") and Curtis. No star or cast members have been announced, but according to the Equity casting notice, lead roles have been offered to actors who have participated in the show's developmental process. Equity principal auditions will be held May 16 with Equity chorus calls for singers on May 17 and dancers on May 18. Patrick Goodwin of Telsey + Company is the casting director. "Chaplin" comes to Broadway after an earlier production under the name "Limelight" which played the La Jolla Playhouse in 2010.