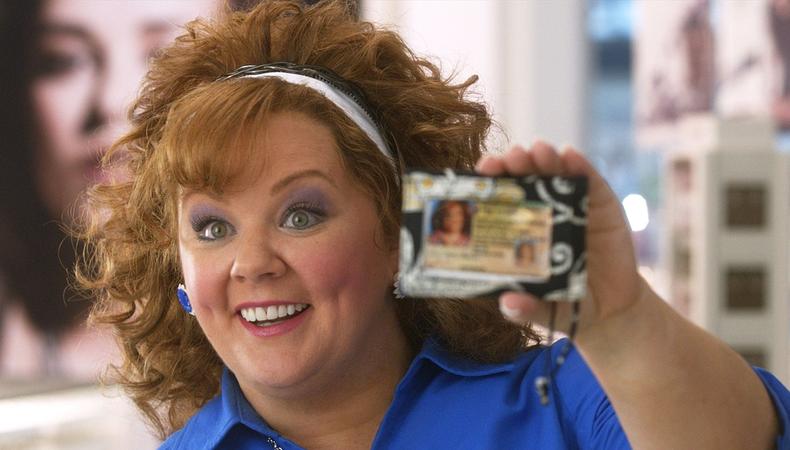 Melissa McCarthy has always had a singular comic voice, a breathy, mumbly topspin she applies to lines banal or raunchy. And her ability to be believable both with the mundane and the profane stands her in good stead in “Identity Thief,” which desperately wants to bottle the magic she brought to “Bridesmaids” while maintaining a gooey, nougat-filled center.

McCarthy stars as Diana, a borderline hoarder in Florida we are told we should laugh at because she doesn’t understand subtlety when it comes to makeup. Except she’s also an accomplished scam artist who racks up an impressive stack of credit card bills in the name of Sandy Patterson (Jason Bateman, gamely setting up the jokes for McCarthy throughout). With the cops suspecting him of a narcotics deal, what is a good-guy accountant going to do but fly from Denver to Florida and convince Diana to return with him to clear his name?

One’s enjoyment of “Identity Thief” is directly proportional to one’s willingness to ignore the glaring plot holes that threaten to swallow the film whole. Once Sandy and Diana meet, they have to take his rental car all the way back to Denver because of the Sandy/Sandy ID situation…and yet Diana is, you know, an identity thief with a whole stack of fake IDs in her home. Then again, her home is under siege by some armed and dangerous criminals, so maybe we’re supposed to buy that it’s simpler for everyone if they just jump in the car and drive.

Those criminals are among the odder plot strands in what amounts to a road trip/buddy comedy. Like McCarthy’s more inspired moments—a sex scene with Eric Stonestreet springs to mind—the blazing guns and sudden eruptions of violence don’t jibe with what is ultimately a cuddly, feel-good movie. Just as Diana’s abrupt humiliation at an upscale shopping mall that leads to a makeover feels like a cheat, something that steals a little bit of what made Diana such a memorable character. That her makeover is immediately followed by a tearful confession that explains away all of her bad behavior isn’t as surprising as it is disappointing. But then, that’s the flip side to McCarthy the actor. The woman capable of elaborate, lengthy comic riffs in “Bridesmaids” and “This Is 40” is also the star of CBS’s comfortable, uninspired “Mike & Molly.” The lesson to both the movie and McCarthy’s career is this, I suppose: Sometimes toeing the line can be exhausting.