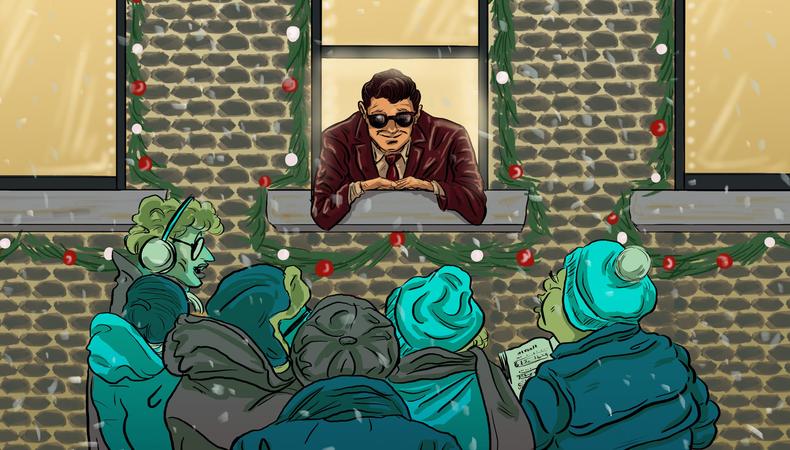 Christmas Past: My first job in Los Angeles was as an assistant at one of the largest talent agencies in town. I’m talking about the kind of company with a Beverly Hills address and three initials in its name. I learned almost everything I know about this business during my first six months there.

Naturally, the client list was star-driven, and it was a blast interacting with that level of talent. There was one actor in particular whom I loved and respected. He made the kind of films that always found their way onto my annual top 10 list.

As the holiday season drew closer, the agency was flooded with presents from grateful clients. I was lucky, because my boss loved to share. Everyone was in a good mood, the workload was light, and the Christmas break was right around the corner.

The actor I mentioned, the one I adored, sent a little something for the theatrical department at the end of our last week on the job. It was a single gift basket. There were four bottles of wine in it and a ton of junk no one ever eats. This guy had made over $5 million that year, and his thank-you present to his team of eight agents was the equivalent of a lump of coal.

Over the years, I learned this kind of behavior is very common. When actors start making that much money, they assume the commissions are enough of a present. Boy, that rubs me the wrong way. I’m all about expressing gratitude for the positive things in my life, and I could never behave like an uncaring Scrooge! I don’t think his gift needed to be super extravagant, but expecting eight people to share a gift basket is absurd.

Christmas Present: These days, I work at a smaller company with three other agents. There aren’t any big stars on our list, but we represent a lot of working actors. Quite a few of them are series regulars. We also have several clients who are just starting out.

One of them surprised me last year. It was right around this time that she popped in with presents for all four of her agents. The young lady had gotten each of us a gift certificate for a 90-minute massage, gratuity included.

This seemed extravagant, so I checked out the spa’s website and learned she had spent about $700 on our presents. Yikes! She barely made $20,000 that year. But it was her best year ever as an actor; she had booked her first big guest star role, and the girl just wanted to spread the cheer. (I did learn she used to work at the spa, so she received a 25 percent discount, but that’s still an extremely generous gift!)

Christmas Yet to Come: These are both extreme examples of how actors demonstrate their feelings toward their reps during the holidays. What’s the right path? I would say it’s somewhere in the middle. Agents don’t expect clients to shower them with expensive Christmas gifts, but we certainly don’t like to be ignored. That’s why I say, when in doubt, a bottle of red or some tasty goodies will do quite nicely.