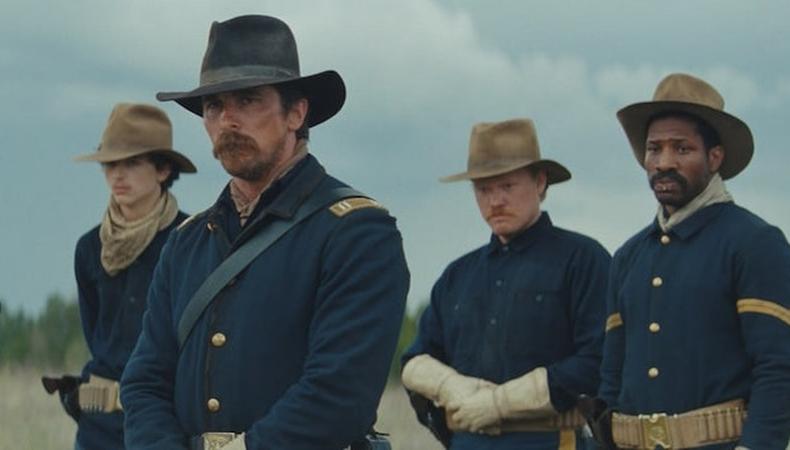 “Hostiles” is the movie that “Crazy Heart” and “Black Mass” writer-director Scott Cooper has been waiting to make. “I don’t think one can make a Western his first film because they’re just far too logistically difficult,” he tells Backstage, but he adds that with his latest feature, he’s made his “contribution to that great American cinematic past.” Set in 1892, “Hostiles” is the story of army captain Joseph Blocker (Christian Bale) who’s forced to reexamine who his real enemies are when tasked with escorting Cheyenne war chief, Chief Yellow Hawk (Wes Studi), back to his tribal land. Rosamund Pike also stars as Rosalie Quaid, a grieving widow who joins Blocker’s journey along the way.

While “Hostiles” continues to rollout in theaters around the States, we spoke with the filmmaker about mining heavy emotions with his growing repertory of actors (cheers to newly anointed Academy Award nominee Timothée Chalamet), and the importance of keeping his films fingerprint-free.

Was an out-and-out Western something that’s been on your bucket list?
I don’t think one can make a Western his first film because they’re just far too logistically difficult, and I think any self-respecting American director will want to make a film in such a vaunted genre. As the great Robert DuVall says, the English have Shakespeare, the French have Molière, and we as Americans have the Western. This is my contribution to that great American cinematic past.

The film’s opening scene really pulls audiences into one woman’s unforgiving life on the plains. First comes the brutal killing of Rosalie’s family and the scalping of her husband. It really shows this unfettered violence and what it was like to live in these times.
That was important to me to show the difficulties in search of a better life through manifest destiny. And I might add that those are my two daughters playing Rosamund Pike’s daughters, so that made it that much more difficult for me. But I also wanted to do a couple things. One: set the tone that this was not going to be your father’s Western. And then secondly, I wanted over the course of the narrative to show that Rosamund’s character really represents the indomitable strength of the human spirit because she suffers such tragedy and loss, and yet she overcomes that. And through her faith, she is even able to lead a life—hopefully one in which a couple of her fellow travelers make a go of it—well down the road.

I love that idea that this is not your father’s Western.
No, it certainly isn’t. Generally, with Westerns, you think of squinty-eyed cowboys, and black hats and white hats, and showdowns on Main Street, and twirling pistols, but there’s really none of that in this film. I mean, it’s a Western in locale and era. Certainly, the majesty of the American West is on full display. But it very easily can be taken from the same world as Joseph Conrad’s “Heart of Darkness” or some of the work of Cormac McCarthy. For me, really, it’s much like “Black Mass” wasn’t a gangster film—in fact, it was kind of an anti-gangster movie. This is not an anti-Western, but it certainly is a different take.

So many of the characters in “Hostiles” are propelled forward by extreme loss or extreme violence. How do you talk an actor through navigating those high emotions on screen while keeping it grounded?
Firstly, I revere actors. I began as an actor. Backstage was one of the first periodicals that I used on a daily basis as much as I could, quite frankly. Beyond communicating with actors (my background certainly helps with that), it’s about making actors feel safe and making them feel that they can take big chances. Because this was my fourth film, most of the actors I’d either worked with before or they’ve probably seen one of my other films and they realize that I’m looking for a truthfulness, verisimilitude, and authenticity that is uncompromising and unflinching. I generally have one piece of advice to the actors before I even begin the project, which is don’t show me, but let my camera find it. And that’s never more so than in this film because there’s great stretches without dialogue. Any actor can tell you that screen acting is much more difficult without dialogue than with.

Is there ever a learning curve for actors feeling out your directorial style?
Well, there’s a learning curve for all of us with every take because I don’t like to rehearse actors. I like to do the work in between action and cut and then between cut and action the next time. We do a lot of investigative text work where we talk about character motivation, back story, what it is that a character desires, what does the character fear. And then I have a certain style of filmmaking in which I never want to see anybody’s fingerprints, most of all mine. I don’t want you to think that I’m ever being clever with the camera. I don’t want you to feel my production design or my costume design. And I never want you to feel my performances.

How did you go about building the supporting ensemble? Ben Foster, Timothée Chalamet, Jesse Plemons—did they all audition?
Well the only actor who auditioned was Timmy Chalament. I wrote the part for Christian Bale. I wrote the part for Wes Studi. I wrote it for Adam Beach, Q'orianka Kilcher, Stephen Lang, Rory Cochrane, Jesse Plemons, and on and on and on. I generally tend to work with kind of a rep company, or I just remember actors who never try to steal the scene, who never try to push an emotion. And Timmy, whose work I had never seen—he’s a very uninhibited actor. He’s not afraid to take risks, clearly, as you can see from “Call Me by Your Name.” He has a really bright future. And then when you have Rory Cochrane and Jesse Plemons, they’re two of the best actors of their respective generations. And for my 10 bucks, Christian is the best actor. I generally have people in mind as I’m writing, whether it be Jeff Bridges in “Crazy Heart” or Christian Bale and Casey Affleck in “Out of the Furnace.” And I’ve just been extremely fortunate to have them take what I’ve written and then take it to places I could have never expected.

READ: ‘Call Me by Your Name’ Gave Timothée Chalamet the Confidence to Just Be

Was Rosamund Pike always the one to play Rosalie?
In fact, she wasn’t. I was a longtime admirer of her work, but it wasn’t until I happened to glimpse her in a music video by the English band Massive Attack that I thought to myself, My god, she’s going to be able to go to places that I really need and want her to go. And we did a follow-up Skype session, and her two young boys were crawling all over her and pulling her hair and she was so carefree and really could not have cared less in terms of the presentation of that Skype session. And I said to Christian, “We found our Rosalie,” and the truth is, I could never imagine another actress playing that part. Some of the things that she does in this film, and I’ve said this before: You don’t learn at the Royal Academy of Dramatic Art or the Actors Studio. [What she does] comes from a very deep and primal place. That’s not acting. [Her being a mother] certainly played into my casting decision. I’m not sure I would’ve cast someone who wasn’t a mother.

Considering the 1890s-era racial and cultural divides that are seen in “Hostiles,” were those explicit through-lines to today that you were hoping to mine?
Yes, without question. It was clear to me that there was a racial and cultural divide in America, and then after the election, one that got much wider. We’re now living in as polarized times as I’ve ever experienced. And this notion that these characters, over the course of their journey, come to better understanding and reconciliation and forgiveness and ultimate enlightenment—during these times, that’s what Americans need.

Benjamin Lindsay
Benjamin Lindsay is managing editor at Backstage, where if you’re reading it in our magazine, he’s written or edited it first. He’s also producer and host of a number of our digital interview series, including our inaugural on-camera segment, Backstage Live.
END_OF_DOCUMENT_TOKEN_TO_BE_REPLACED