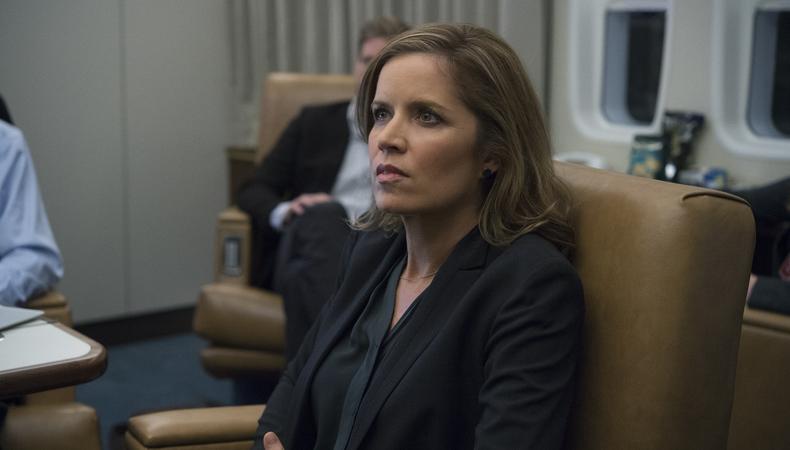 After calmly stealing the show in "Gone Girl" as no-nonsense Det. Rhonda Boney, "Deadwood" veteran Kim Dickens joins the ranks of "House of Cards" as a crusading journalist—but whether she'll meet the same fate as that show's other reporters, she won't say.

Tell us about “House of Cards.”
I can’t give out too much information because they keep that under lock and key. I play a journalist who has been living abroad for about 10 years and I’m pulled into the whirlwind of D.C. politics and the whirlwind of Frank Underwood. Her ethics are to do what’s right. I went in fully aware of the evolution [of previous journalists on show]. It’s a risky profession in the world of Frank Underwood.

How do you typically prepare for an audition?
It varies for me, really. Sometimes I’ll read the material and I think I can step right into the world. Sometimes I’ll go through the script and take notes about the character. Or I’ll start by memorizing it and then step into it emotionally. It really varies for me on the project and the character. People say you’ve got to have the right clothes, and that’s true, you need the right feel, the right shoes to have the footing for the character. It’s hard to explain but it can help you find the character. With “Gone Girl,” I had not read the book or the script because it was under lock and key. I just started reading the sides, the pages for the audition. It’s obviously so amazing, and the characters are so amazing. It was in the lines. I just started working on it. I went with my instincts. But once I got into the fittings with costume designer Trish Summerville, I started to connect with [Detective Rhonda Boney] more. The clothing was not showy, it was off the rack. It had a laidback, confident, casual presence. Just a humble worker feeling, really. It was such a gift from the geniuses in the costume department. It informed the way I walked and stood.

What do you wish you’d known before you started acting?
There’s this trick to not stress about things, that goes with any career or life’s journey. I’d been studying for a while; I’d been to Lee Strasberg Institute and the American Academy of Dramatic Arts. I was in New York and waiting tables. I took a class once a week with a teacher named Deena Levy, and that’s where it all came together. She basically talked about what works with you. There are a lot of actors who think they need to get rid of what’s uniquely you, like your accent. Sometimes you need to erase those things for certain roles, but sometimes you need to fight against homogenizing yourself. It was a great lesson to learn: What works about you. I was going on all of these meetings, and I had short, bleached blonde hair and I was funkier in the way I dressed. All these heads of agencies said, “You have to change your hair, or wear these little black dresses.” So I bought those little black dresses, but I didn’t change my hair.

I eventually went in and got my first role, in “Palookaville,” with short, bleach blonde hair. They changed it for the character, but I was able to play the part and capture the essence of the character [in the audition.]

On whom do you have an acting crush?
Amy Poehler and Jon Hamm. They just bring me so much joy to watch.

What was your worst survival job?
My jobs before acting were mostly all waiting tables, besides some stints in a music manager office or a local TV station in Nashville, but those weren’t so bad. Probably being a cocktail waitress in a New York nightclub because it was just the hours, and to go through those dance floors with a tray of cocktails. That makes for a long night. You’d always want to get the VIP lounge, which was the fourth floor of the nightclub, it was mellower. I think it was called Mars. But the last job I had was from the Cowgirl Hall of Fame and some of my best friends are from that period and some of my most hilarious memories. It’s still there.

Which of your performances has left a lasting mark?
Joanie Stubbs in “Deadwood.” “Deadwood” itself was just such an amazing acting experience, being in that world and that set, working with David Milch, and just playing that character. So many of those characters were so human and they resonated with the audience. So much was playing subtext and the minutia of life. It was challenging; it was difficult. We all knew it was one of the great ones. And it didn’t get completed, I think it had another year in it. There are fans of the show that still yearn for that closure and I’m sure the actors would like to do the same, although it’s probably not feasible at this point. And Detective Rhonda Boney. I worked on it for so long with David Fincher, getting pushed and challenged into your A game. I wish they would turn that into a series. I would love to continue in that world.

What's your worst audition story?
I had an audition for a pilot 15 years ago. The director asked to come in wearing high heels and pencil skirt because that was the character. He asked me to take my high heels off and I thought, Why? I won’t feel like the character. I looked at the casting director. I looked at the director. He said, “Just to see, if you don’t mind.” I slipped my shoes off and it totally changed the character for me. But then he just stared at my feet. And I thought, You jerk. Now, I wouldn’t do that. I just felt bad for him. But that’s so rare. But trust your instinct, say no sometimes.