12 Years of ‘Boyhood’ with Richard Linklater 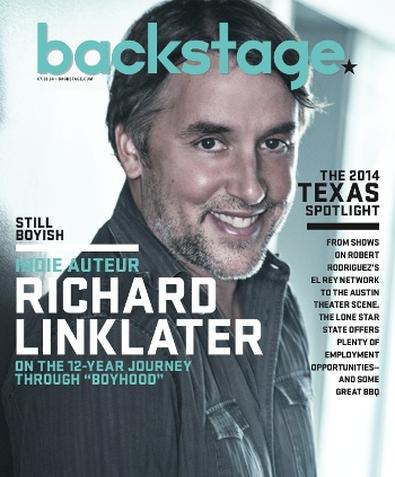 On the day Richard Linklater sits in a suite at the SLS Hotel in Beverly Hills to discuss his latest film, Hall of Fame outfielder Tony Gwynn will die, the U.S. will win its first match of the 2014 World Cup against Ghana, and the White House will announce it is sending 275 troops into Iraq to protect the American embassy, a troubling potential precursor to renewed military engagement in the region.

Normally, those events would be inconsequential to an interview with a filmmaker, but one of the marvels of Linklater’s “Boyhood” is the way it reminds us that the personal is always linked to the global. In the process of telling the story of a boy named Mason (Ellar Coltrane) from age 6 to 18, Linklater delivers an understated portrait of America in the post-9/11 era. Everything from the Iraq War to the 2008 election of Barack Obama forms the backdrop to Mason’s life, but Linklater—who wrote and directed “Boyhood” over the span of 12 years—never oversells the current events, merely allowing them to be part of the film’s fabric, like the period-specific pop music heard on the soundtrack.

“I knew ‘Boyhood’ would incorporate [current events], but from the viewpoint of the kid,” Linklater says. “I didn’t want to get too bogged down in the details. But I remember growing up during the Vietnam era, and it was on TV. I didn’t understand the politics—there was just a war going on. Friends’ dads and older brothers went off and came back, so you got some sense of the war, its toll on people, that it’s a part of life.”

But “Boyhood” doesn’t just glance at the darker elements of the last decade; it also captures Mason’s family (including his sister Samantha, played by Linklater’s daughter Lorelei) as they buy copies of “Harry Potter and the Half-Blood Prince” at its midnight release. It’s a time capsule for both the audience and the filmmaker. “I’m a parent through this whole period,” Linklater recalls. “We’re getting these books and I’m reading them to my daughter. These special book events where the book comes out, I don’t remember that as a kid, and I don’t think that’s gonna be a staple of the future. It’s hard to get kids to show up at midnight to get a book that they could buy the next morning.”

Linklater laughs. He’s as relaxed and unpretentious as his movies, which exude laid-back, calm confidence. In a career that’s journeyed more than 20 years, he’s had plenty of highlights, including “Dazed and Confused” and his “Before” trilogy, but “Boyhood” has elicited his most rapturous reviews. Working from a detailed plan, Linklater wanted to reflect the passage of time in a more concrete way than your typical coming-of-age story. Every year, he’d reunite Coltrane and Lorelei, as well as Ethan Hawke and Patricia Arquette as the kids’ divorced parents.

“I think people want to project on it a certain randomness, and that was [part of it],” says Linklater of the novel filming style. “But there was a master plan, a trajectory of all the characters—the beginning, middle, end, and where it was going. I’m a big believer in structure and outlines—I know the end before I start.”

This might surprise some who watch “Boyhood,” which, like all his best films, seems so loose-limbed that it gives off the impression of unhurried improvisation. Linklater has directed studio movies, but the 53-year-old auteur is more accurately pegged as an indie outsider with close ties to Austin ever since his 1991 breakthrough, “Slacker,” which followed a collection of colorful individuals interacting across the Texas capital. His connection to Austin goes even further back, though; in 1985, he founded the Austin Film Society, a nonprofit that screens movies and awards grants to filmmakers. His aspirations for AFS were modest: “Film geek that I was, I was like, ‘I wanna see a bunch of movies and I bet other people do, too.’ And then an industry kind of built up around Austin, which was [itself] growing.”

Although he’s made films in Los Angeles, New York, and across Europe—“It’s a mobile, vagabond-y life,” he says of his vocation—Linklater still prefers his Austin home. “It’s just a fun film culture,” he explains. “I hosted a film series this spring, showing a film every Wednesday night from the ’80s. People show up—old friends, young people—and in the lobby after every [screening], people talk. It’s just about the culture—it’s kind of cool, pretty chill. It’s fun to be in an environment where people aren’t trying to maximize anything. I think people have inner rhythms that dictate where they work best, where they’re creative.”

Not surprisingly, Texas culture has filtered into his films, whether it’s the “Keep Austin Weird” ethos of “Slacker” or the affectionate snapshot of small towns in “Bernie.” “Boyhood” is his grandest study of the state yet, showing its conservative and liberal sides, its God-fearing denizens and its hippie art-school types.

Linklater, rightly, sees his home state as a microcosm for the country. “We live in a cultural divide,” Linklater says. “There’s kind of two Americas, and there’s a lot of contrasts.” He references a scene depicting left-leaning Mason being slightly taken aback after receiving a Bible and a rifle as birthday presents. “Boyhood” doesn’t use the moment to score a cheap culture-clash joke, though; the scene is about how people with different political persuasions coexist, even in the same family. “You drive to East Texas and that’s very real,” Linklater says. “I mean, that happened to me: I was 13, and I got a Bible and a shotgun. At the time, it was kind of cool. We’d go shoot targets—that was fun. It was only years later I realized, ‘Oh, yeah, people in other parts of the country maybe would think that’s weird.’ There wasn’t any irony [in that scene]—they go hand in hand. That’s America.”

Linklater wears his considerable artistry lightly, and he has a sweetness and candor when he speaks that suggests a man who’s retained his ability to be open to people and experiences. Maybe it’s partly because he’s talking about a project inspired by his upbringing.

“That 12-year thing sounds like a hook or an experimental notion, but it really wasn’t,” Linklater says of “Boyhood.” “It was more of a storytelling methodology that came to me: ‘That’s the only way to tell this.’ First through 12th grade, it was so much of how I remember childhood: You’re a little kid and you think, I’m gonna be in school for 12 more years? It just seems forever. I thought that on the other side of that was freedom, or being an adult, or being at a new thing away from home. I remember as a little kid just feeling that I was stuck on this grid.”

But now that he’s the parent with children, does he look at that grid differently? Does he have a different perspective on freedom?

“There is none?” he jokingly responds with a good-natured laugh. “Nah, I can always hang on to that youthful feeling—I know what that is, and I probably always will, I hope. But you see life as this accumulation of responsibilities, obligations of your choosing. You don’t have to have kids, you don’t have to have a job—everything has its cost and its compromise. You see adults giving up certain dreams and living in a world that is not 100 percent what they wanted. But that’s what we’re all doing, you know? If you can get a percentage of what you set out to get, you should be pretty happy.”

Deep in the Heart

Because of Richard Linklater’s long association with Austin, Texas, Backstage was curious about his take on the city’s film and television industry in comparison to, say, that of Los Angeles. “There’s just a lot less work,” the filmmaker acknowledges. “If you’re gonna go fishing, go where the fish are. It makes sense as a writer or an actor to be in L.A. or maybe New York. It’s a life choice, I guess—it’s just up to the individual.”

Nonetheless, Linklater does think that Austin (and Texas in general) has become a more robust filmmaking community than when he started in the mid-1980s. “There’s more infrastructure and more support,” he says. “It was harder a long time ago, because you were just the only one doing it—it was more out of the ordinary. Now, it’s great: We’ve got studios, more incentive programs, more agents.”

The vastness and geographic diversity of Texas was especially helpful to “Boyhood,” since the long-running project had a relatively small budget. “It’s funny, there were no limitations on this movie outside of budgetary,” says Linklater. “There were no commercial constraints, there were no expectations, no release date, no distributor—no anything, really. It was incredible freedom, but we only had $200,000 every year to do everything, and we’re shooting on film. But Texas is a fun state—it’s so big, you could roam around and get different looks. We would often shoot in Central Texas and fake it for other parts.”

But despite the state’s growing entertainment industry, one reality for Texas actors remains the same: logging plenty of miles. “Texas is kind of one area,” Linklater explains. “So, poor actors, they drive in three and a half hours from Houston, San Antonio, Dallas. Texas actors just get used to it. They go all over the state for auditions. I feel bad: ‘You came in all the way from Dallas just to meet me?’ But that’s what they do, that’s the job. It’s a deep talent pool, just like anywhere.”