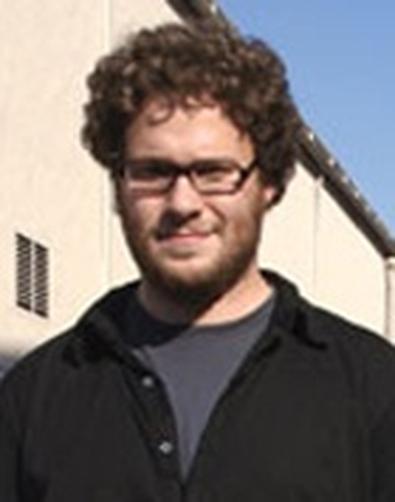 Seth Rogen and Jonah Hill's friendship can best be explained by one film -- a little-seen 1996 comedy starring Tom Arnold called The Stupids. As Hill discusses the various hats he wears as an actor, comic, and writer, he randomly references a quoate from the movie: "I'm my own grandpa." Rogen instantly jumps on it, exclaiming, "Did you really just quote The Stupids?" then adding matter-of-factly, "You know, Brent Forrester wrote that." The two crack up at the nerdiness of this exchange, prompting Hill to explain, "You've just pinpointed why Seth and I are friends. I quoted one sentence of The Stupids -- " Rogen jumps in, "And I instantly knew what you were referring to and who the writer was."

Rogen and Hill share much more than an affection for obscure comedy, a knack for making crass characters endearing, and heads of curly hair. Both are gifted comedians who are experiencing their first leading roles in major studio pictures this year. In addition, neither intended to become a movie star: Rogen wanted to be a standup comedian, and Hill was doing sketches at a bar in New York when Dustin Hoffman got him an audition for what would be Hill's first film, I Heart Huckabees. Now, Rogen and Hill are managing blossoming young careers not only as actors but as writers.

Their latest project, Superbad, is a perfect showcase for their talents. Originally scripted by Rogen and his writing partner Evan Goldberg when they were 13 years old, the film centers on a trio of high school friends who endure countless complications in their efforts to obtain alcohol for a party. The two main characters are even named after the scribes: Hill plays the hyperactive Seth, while Arrested Development's Michael Cera is the put-upon Evan. Rounding out the cast are Emma Stone and Martha MacIsaac as Seth's and Evan's love interests and newcomer Christopher Mintz-Plasse as the fake-ID-toting "McLovin," who finds himself the unwilling guest of two incompetent police officers, played by Rogen and Bill Hader. The R-rated film is unapologetically outrageous and vulgar, with scenes that border on offensive. It's one of the funniest films of the year, positioned as the sleeper hit of the summer.

Rogen is riding high on the recent success of Knocked Up, which marked his first foray into leading-man territory. That film was written and directed by Superbad producer Judd Apatow, who gave Rogen his break in the business by casting him in the series Freaks and Geeks and Undeclared (for which Rogen also wrote). Rogen isn't shy about crediting Apatow with his career. "My first audition ever was Freaks and Geeks," he notes. "And I was thrust into this world of quality that spoiled me." Apatow went on to cast Rogen as one of Steve Carell's charmingly obnoxious friends in The 40-Year-Old Virgin, which featured Hill in a small role as a confused eBay-store customer. Hill also appeared in Knocked Up as Rogen's slacker buddy, a part Hill appears to have been researching since the two began hanging out after shooting Virgin.

Rogen and Hill have also been busy on projects outside the Apatow circle. Hill stole scenes as a college freshman in last year's cult comedy Accepted and was recently seen opposite Carell in Evan Almighty. Rogen played Matt Dillon's best friend in last year's You, Me and Dupree and voiced a character in Shrek the Third. Despite their meteoric rises, Rogen and Hill appear to have remained humble about their success. Indeed, they can't seem to get over the idea that their picture will be gracing this issue. "Oh my God, we're your cover story?" Hill exclaims before descending into uncontrollable laughter. He turns to his friend in total disbelief. "Dude, we're going to be on the cover of an acting magazine!"

Back Stage: How did you meet?

Jonah Hill: It was at a screening of The Life Aquatic at the Grove [in Los Angeles]. Seth was sitting in front of me, and I knew I was going in to audition for The 40-Year-Old Virgin in two days. So I tapped him on the shoulder and said, "Hey, asshole, let's be BFF."

Seth Rogen: He said, "Hey, I know who you are; I'm auditioning for your movie. And we have some friends in common."

Hill: I'm not the type of person to be abrasive to someone. I wouldn't have said anything if I wasn't going to meet him two days later.

Rogen: And I'm easily creeped out by people, and he didn't creep me out.

Hill: Though I did try to kiss him. And I tried to pull the popcorn trick on him. From behind.

Rogen: You said you were going to audition for this small part, and I was excited because I had written that joke — that someone comes into an eBay store and asks to buy a skateboard. So I created your role.

Hill: I figured I really had one chance to work with these people I really liked, and I had the opportunity to say that one line or I could think of a bunch of funny shit. I really didn't know what an eBay store did, so I just thought of all the questions and things that would frustrate me about that situation and, luckily, they let me keep talking.

Rogen: Luckily, that day of shooting we had way more time than we needed.

Back Stage: How did your friendship develop?

Hill: The day we shot the dancing scene that plays over the end credits, I remember Seth specifically asked to be friends. Well, he didn't really ask.

Rogen: Right, I commanded him. It was the first time we'd really worked together. Jonah was only there a few hours for the eBay scene, and I'll be honest, I was just fucking off that day. The day we shot [the dance scene set to the song] "Aquarius" was the first time we really hung out.

Hill: We exchanged numbers, and I called Seth, and he didn't call me back for six months.

Hill: But it was weird: He would always call me to let me know it was his birthday.

Hill: I would run into mutual friends and ask why he never called me back. Everyone explained that was how he is. His girlfriend says that one time we saw each other at a party and he was really nervous.

Rogen: Apparently I said, "Oh no, that's the guy I haven't called."

Hill: Then we started hanging out.

Back Stage: The Superbad script is co-written by Seth, and Jonah's character is named Seth. Is Jonah playing Seth Rogen in the film?

Rogen: No. He's playing him, I assume. I told him in the beginning not to do me because I'm in the movie and I'm doing me. We can't have two me's.

Hill: I think we were sitting at your house playing video games, and you said, "You're not going to do me, right?" Also, Seth had just done Knocked Up before this film and that was a really defining thing of who Seth was. So this was kind of my chance to show what I could do.

Rogen: He didn't need to do me to make it funny. The jokes were there. That's all it was, really. There was nothing that made it me more than anyone else. We wrote it in my voice, but it's not that distinct a voice really — just a guy who swears a lot.

Hill: Also, there was a lot of playing around with the script to find our voices.

Rogen: We literally sat down with Mike and Chris and Jonah and went through the script line by line and were like, "Okay, this is the written line. What would you say?" Then we'd write down what they said and type it into the script.

Back Stage: So as a writer, you're open to actors changing your lines?

Rogen: Absolutely. The dialogue to us is always kind of the least important part of writing a movie. The outlining and developing of the story and finding the emotional through-line and structure is the difficult part. The actual writing of the jokes is actually the easiest part.

Hill: I also think the worst thing you could do is leave somebody with no options. If I was directing a movie, I wouldn't want just one option — what if somebody hated it? I'd want 100 options.

Back Stage: You both have written your own material to perform. Where did that desire come from?

Rogen: I just started writing out of boredom slash a goal to not ever have a real job. I never really thought it through to the point of "Maybe they'll make this movie and then I'll be an actor!" Part of the goal was to be in it, but ultimately they go well together, and it's nice that people are letting us do it.

Hill: I think in comedy the people that really stay relevant and cool are the people who are at least trying to generate material for themselves. A lot of the people I like are responsible for the movies they're doing, in a way. To show your own voice or what you find funny — no one knows that better than you.

Rogen: Plus, it became clear there was no one sitting around saying, "I wonder if Seth Rogen could star in a romantic comedy." So we kind of had to do it ourselves.

Back Stage: Speaking of which, you've both played romantic leads this year. How did you prepare for these new roles?

Hill: I really treated it as if Michael was a girl. That is the love story of the movie. Then there's the story with Emma's character. I was challenged, but Seth had gone through it literally one month before me. That was the greatest resource I had, that one of my friends was right there who had done the same thing. And the best advice he gave me was "Just pretend like you're not the lead in the movie. Just play it like you would play your other roles." And it really made things a lot easier. I could tell the takes where I would have that in my head.

Rogen: Where you were thinking, "I've got to carry this movie!"

Hill: Especially at the beginning. Then, as I just tried to be the best I could be, it got easier.

Back Stage: This marks your third film collaboration. Does working with your friends spoil you for other projects?

Hill: It does. I remember we used to complain about people like Ben Stiller and Owen Wilson and say, "Why are those guys always working together? Don't they want to work with anyone else?" I recently realized we've become those guys.

Rogen: I remember I went to a screening of Meet the Fockers, where Owen Wilson has a cameo at the end. And the director got up afterwards and asked, "How many people liked the film? And how many people thought, 'Don't these guys ever work with anyone else?'" Me and my friend were the only ones with our hands raised. So I thought, "Okay, I guess people like it." And I don't care if people get sick of us; I'm going to keep doing it.

Rogen: Also, there's something to be said for having that history and rapport with someone. As opposed to, say, playing Matt Dillon's best friend in a movie.

Hill: Has he seen The Stupids?

Back Stage: What makes you laugh?

Rogen: Each other. Our friends.

Hill: Definitely. I think I'm funny because it's about keeping up with Seth. This is why I am the way I am.

Rogen: Hey, man, don't blame your childhood trauma on me. I didn't create this defense mechanism.