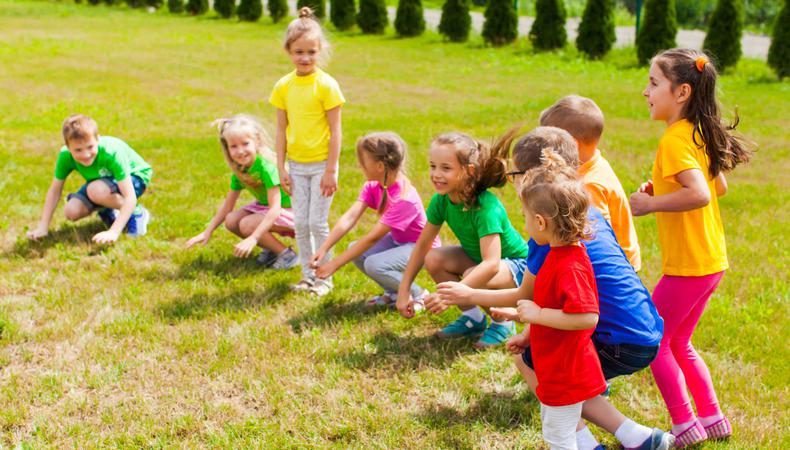 Acting games are an excellent tool to help kids feel comfortable in the acting ecosystem. Games help young actors warm up, get focused, and discover the joy of performance. Learn about the best acting games for kids to cultivate the skills they need to succeed as actors.

Why should children do acting exercises? 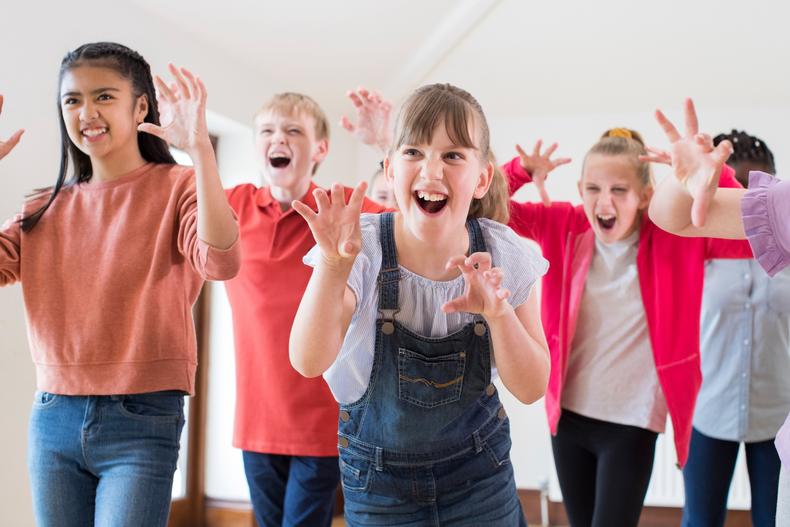 In addition to introducing children to the basic skills of performance, acting games:

Games ask children to use their imaginations in new and wonderful ways, which sparks their creativity. “Kids must know what they’re doing improvisationally, instinctually, before they’re ever given the spoken word,” says youth acting coach Denise Simon.

“Thinking outside of the box and finding choices that are interesting, bold, and funny can help to make a compelling performance,” she continues. “The play is only going to happen through games, exercises, and improv, when the mind is free to explore. It’s the spontaneous muscle that needs to be trained, not the thinking head. Acting games help train that spontaneous muscle. Actors need to play. Playing games is where the creative juices start to flow.”

Play-based learning is one of the best ways to engage children in the educational process. Teaching children through playful activities focused on an educational outcome makes them interested and excited to learn. Studies show that this type of learning helps children develop key abilities including social skills and critical thinking.

Theater games remind kids that acting can and should be fun. “I always prioritize the joy of the craft of acting with my students,” says Mae Ross, acting coach and owner-director of 3-2-1 Acting Studios. “If we aren’t having fun, then why are we doing it to begin with?”

RELATED: How to Become a Child Actor

No actor—adult or child—is ready to perform without properly warming up. Acting exercises help gently reinforce the mind-body connection necessary for any quality performance. Simon recommends warming up with a game that boosts energy, and then playing one to help the actor focus and concentrate.

Think back to your first day at a new school as a child. You were probably nervous, right? New friends, new situations, and the need to figure out your place in the social hierarchy are all good enough reasons to curl up in a ball. It’s the same for young actors meeting each other at drama camp, a youth theatrical production, coaching classes, or on set—plus the added anxiety of knowing they’ll have to perform in front of each other. Group games are a great way to encourage interaction, cohesion, communication, and community for young actors.

What are the best acting games for kids? 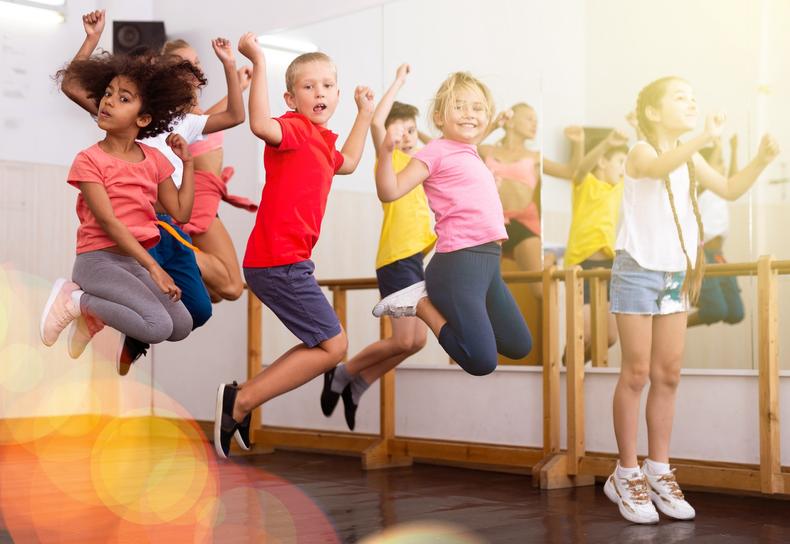 Here are the 10 best interactive, improvisational drama games for kids.

The game begins with all participants forming a circle. The first person says, “Zip!,” and then “sends” the word to someone on the other side of the circle by making eye contact and pointing to them. That person receives the “Zip!” and sends a “Zap!” to another person across the circle. That third person receives the “Zap!” and sends a “Zop!” to another player. The zip-zap-zop cycle would continue perpetually in a perfectly played game; in actuality, it goes until someone misses their cue or “Zaps” when they were supposed to be “Zopping.”

Encourage children to move as quickly as possible—think Hot Potato speed—to ensure that players are engaged, alert, and responsive to one another. This activity encourages young actors to pay attention to each other’s physical and verbal cues while still remembering their own “line,” which translates nicely to the stage or set.

The build-a-story theater game helps young actors flex their creative muscle and listen carefully to one another. It uses collaborative effort to weave a narrative.

To play, have children stand in a circle. The first player begins by saying the first line of a story. The next player adds a line to the story that in some way includes or incorporates the first line. As the story continues around the circle, each player builds on the last line. Ask players to take creative approaches to the story and see what adventures arise.

Do you dream of your kid landing a role in the next “The Walking Dead” spinoff? Beyond helping with memory recall and building community for young acting troupes, this game provides a great immersive training opportunity for future zombie roles.

To start playing zombie tag, choose one child as the first zombie. They must choose another child to “bite” by tapping them on the arm. Players can walk to try to avoid the zombie, but nobody is allowed to run. The intended victim can only escape by walking away from the zombie so that they are never tapped, or by calling out another player’s name. If they name another player correctly, that player becomes the zombie and picks their own victim, restarting the game from there.

Poor puppy is a game that helps with visual storytelling, performance, and emotive skills, and will make you want to go to adopt every single dog in the shelter. It always gets some laughs (even if that means losing the game).

Divide the children into pairs. One of them pretends to be a puppy—either you choose which or have the children decide, depending on what feels right. Their job is to nonverbally act like a puppy who really wants something (treats, pets) and make the other player smile or laugh. The other player must pat the “puppy” on the head and say, “Poor puppy!,” without cracking a grin or letting loose a chuckle. Winning puppies usually make the other player burst out in laughter by exaggeratedly pushing out their lower lip, whining, holding up their “paw,” and making big puppy eyes.

Space jump is one of the most famous improv games out there. To play, have several players go to the center of the room, and number them one through five. The rest of the group imagines a scenario for number one (for example, for some intertextual gameplay, let’s say the player is a zombie). Player 1 performs improv about that scenario (likely walking slowly with their arms out and mumbling about brains).

After 15–30 seconds, the leader calls out, “Space jump!” Player 1 freezes, and player 2 joins them, using whatever pose player 1 is frozen in as inspiration for an entirely new scene. The two actors portray the new scene until it’s “Space jump!” time again, and actor 3 joins. Rinse and repeat for player 4 and 5. Upon reaching the final five-player scene, when the leader calls, “Space jump!,” it goes in reverse order: Player 5 leaves the scene and it goes back to the scene that the 4 players were doing. This continues until only player 1 is performing their initial scene. 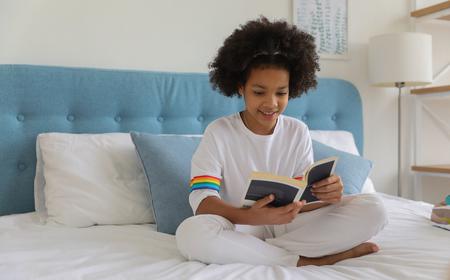 Freeze, dance, justify helps get the jitters out for any high-energy or high-anxiety child actors while also fostering their improv skills.

Actors dance around to music, constantly contorting their bodies into amusing, strange poses. The leader calls out, “Freeze!,” at a random time, causing all actors to hold their pose. The leader points to another player and requests that they “Justify” their pose. The key here is that the justification needs to be creative. A child frozen with their arms entwined, for example, might say that they are turning into a tree and the arms are their branches, or that they’re at a yoga class, or that their friend just super-glued their arms together. The sillier, the better! After multiple kids justify their poses, the leader unfreezes everyone, and the game starts anew.

One of the best theater games for kids, this game helps with the suspension of disbelief necessary for theatrical prop work. It also nurtures children’s imaginations and makes them listen to other people’s interpretations of the same experience.

To begin, break children up into teams of two and give each a small toy or stuffed animal. Each player must act as though they either really want the toy (when they don’t have possession of it) or as though they really want to get rid of the toy (when they do have possession of it). Players should create scenarios that the toy is something different to support their acting: just-excavated hidden treasure, a slimy frog, a beloved family member, a diaper. The player who is the most convincing in any one scene “wins.”

Want to spark creativity while also illustrating life’s infinite possibilities? No, we’re not recommending taking children to see “Everything Everywhere All at Once”—just yet, at least. Instead, try your hand at this imaginative game.

To play, choose any everyday situation—such as walking a dog, reading a book, or working on homework—and ask players to perform that situation in as many ways as possible. With walking a dog, for example, one scene might be an angry walk through the city because someone else forgot to take the dog out; another might be a joyous frolic through a grassy field; and still a third could be an anxious walk filled with ever-increasing worry about getting lost.

This game encourages children to consider the voice, expression, attitude, appearance, and other defining traits that go into characters, which they can then apply to their acting performances in the future.

To play, come up with a list of characters that children are likely to know and that have distinctive characteristics. You can include Disney characters, kid TV stars, and popular professions (teacher, doctor, garbage collector). Then, assign characters, and have players act out their characters one by one. The rest of the group guesses the character based on their behavior. For example, if a child is assigned Ariel from “The Little Mermaid,” they might move around the room as if they have a tail, run a fork through their hair, or even sing wide-eyed that they’ve “got gadgets and gizmos aplenty.” It’s all about taking on the character’s attributes and performing them for the group.

Roaring, trumpeting, burrowing, and snapping: This game gets children to think about body language as a form of communication and creativity.

Each actor chooses their own animal, then performs that animal’s movements for the rest of the class without sharing the animal’s identity beforehand. The rest of the students guess the animal based on the performance. This can be conducted with students performing from the front of the room one at a time; or if cacophony appeals to you, it can be done all at the same time.