Lily Collins wants to tell a story. No, really—that’s why she’s Zooming from her Los Angeles home on a mid-October day, talking about why she became an actor. “I have always loved telling stories, since I was a kid,” she reflects. And as the child of Phil Collins and Jill Tavelman, it’s only natural that she got bit by the performance bug. “I knew that, as an adult, I wanted to take people on that journey with me. It’s a form of escapism. There’s such a magic to those worlds that we create onscreen.” 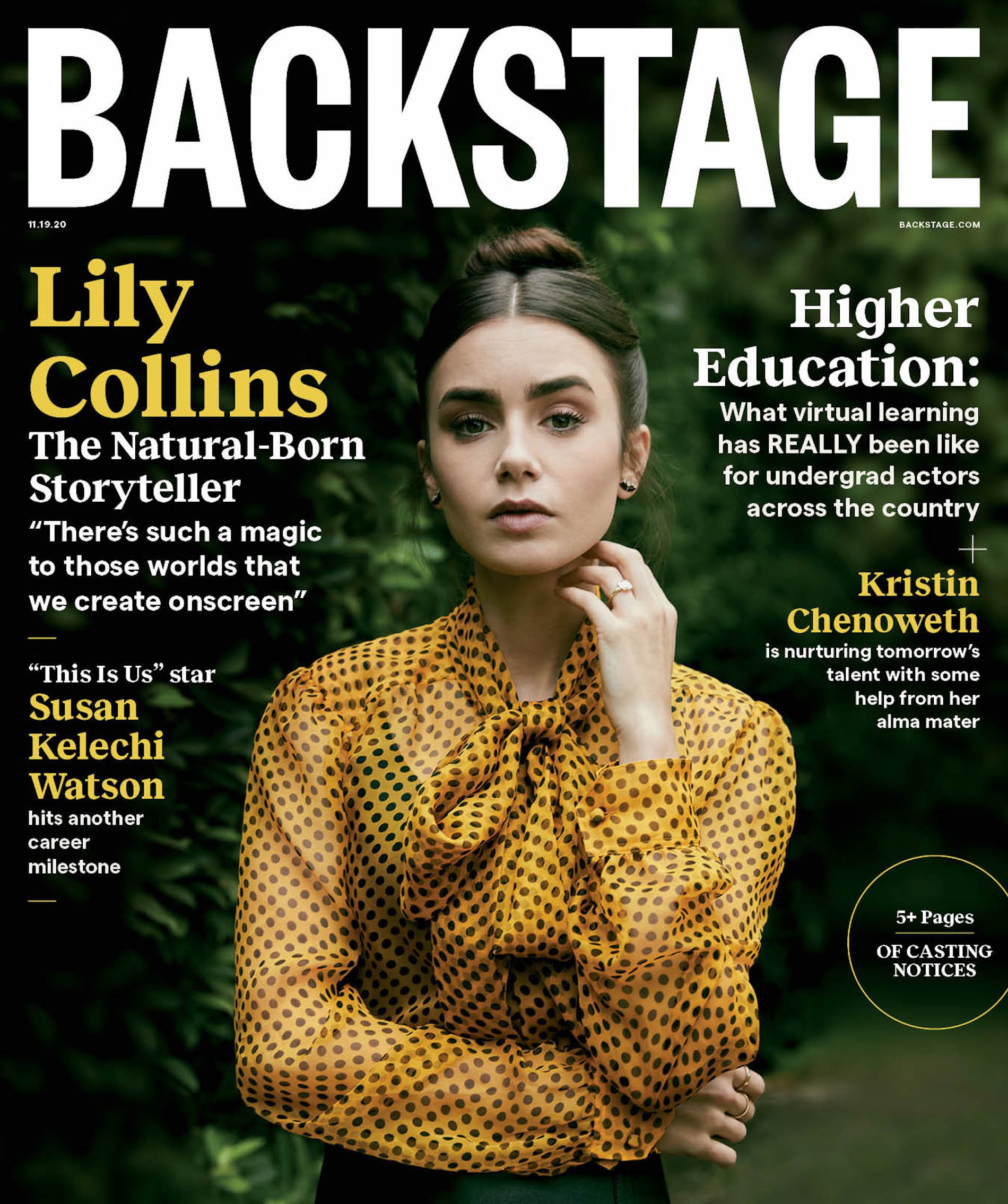 She’s been creating that magic for the last 11 years, from her feature film debut in “The Blind Side” to worlds horrific, thrilling, fantastical, comedic, dramatic, and beyond. She’s escaped typecasting, instead disappearing into stories near and far, past and present, each one different from the last. Her two most recent projects are both for Netflix, but they continue the trend of falling on opposite ends of the genre spectrum.

Just before the industry took a pandemic-induced pause in 2020, Collins was jumping between France and Hollywood—first to lead Darren Star’s “Emily in Paris,” on which she plays a millennial marketing executive who becomes a fish out of water after she’s transferred to the City of Lights for work, and then opposite Gary Oldman in David Fincher’s “Mank,” which charts the Oscar-winning screenwriter Herman J. Mankiewicz’s co-writing of “Citizen Kane.”

“I love every genre, in a sense. I don’t want to ever say I’ll never do one, because an incredible filmmaker may put a bizarre, interesting twist on a genre that you never thought you’d associate with, and all of a sudden you’re going, ‘I couldn’t imagine not being a part of this,’ ” Collins says. “I want to feel like there’s something I’m going to learn about [myself] through a character, and then there’s something that people will be able to learn about themselves.”

“I really love teamwork. I collaborate with everyone I can who has a hand in creating the character, and it all ends up piecing together.”

Collins’ bold beginnings in acting make it clear why she uses each role as a chance to learn. In fact, her whole career in acting has been self-taught. “I was part of plays and musicals when I was a kid, and I think I was 16 years old when I thought, OK, I actually do want to do this. Not just at school—I really want to pursue this professionally. I started auditioning for jobs to get more experience, but I was told no,” she remembers. “I mean, I was still so green. I was auditioning, and I didn’t really understand what ‘green’ meant. I would ask for feedback, and they would say things like, ‘You just need to keep doing it. Just train, in whatever way that means, practice, and do more research. You’re new, and that’s fine.’ ”

And while rejection is something most teenagers will go out of their way to avoid, a burgeoning modeling career and aspirations to become a broadcast journalist gave Collins some experience with the feeling. When she developed her acting convictions, she knew she’d be faced with more of the same. “I waited until I was at an age where I felt I was strong enough to continue to be told no. If I had felt that it would discourage me too much, I would have known to not pursue it, I think, but I really felt strongly about it.” 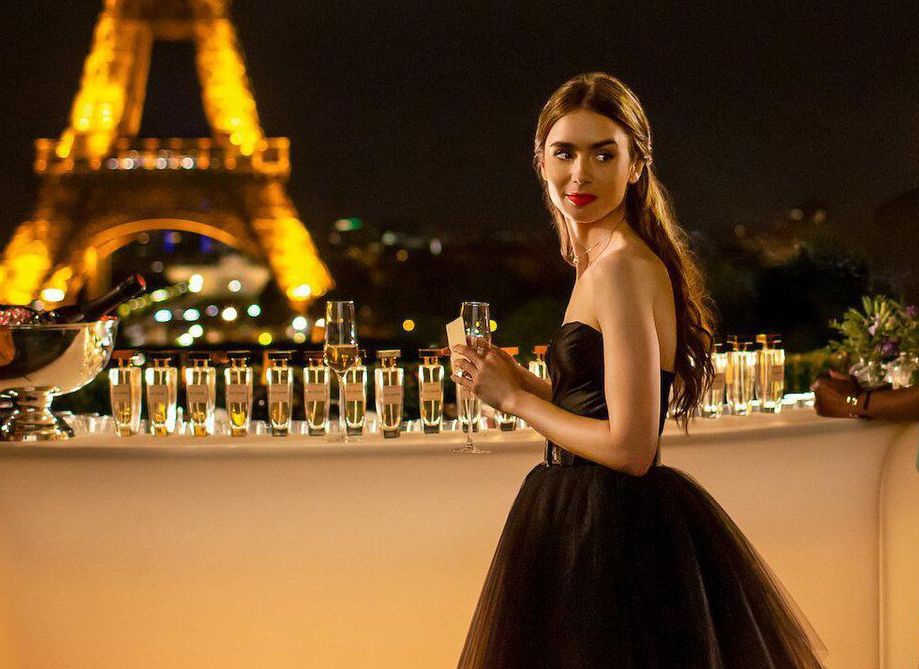 How Darren Star Casts His Leading Ladies, From Carrie Bradshaw to ‘Emily in Paris’

So what did she do to get a yes? She kept auditioning—for years. “I knew that there were lots of things I needed to improve on and get more comfortable with, within myself, in order to be more free within a scene and a moment,” she admits. “I got close on things, but I didn’t quite get there.” She graduated from high school and went to the University of Southern California, where she began studying broadcast journalism. Then her investment in acting began paying off, first in an appearance on the 2008 “90210” reboot and then in “The Blind Side.” Four years after she started auditioning for practice, she decided to dive into the craft full time.

It’s hard to imagine four years of being told you’re not good enough, but it only fed Collins’ drive to do it right. “I tried to take ‘No’ as, ‘No, not right now,’ not, ‘No, this isn’t for you.’ In a nutshell, it was like a comma, not a period,” she explains. “I know that sounds far easier than it is, but I knew that what I wanted to do was what I wanted to do. Being told you’re green is something that you can improve on. It means there’s more work to be done. I’m not someone who’s ever shied away from more work. I truly believed that I was going to be doing this one day, and I just kept powering through the nos. To be honest, it made my first yes so much better, because I felt like I’d earned it.” 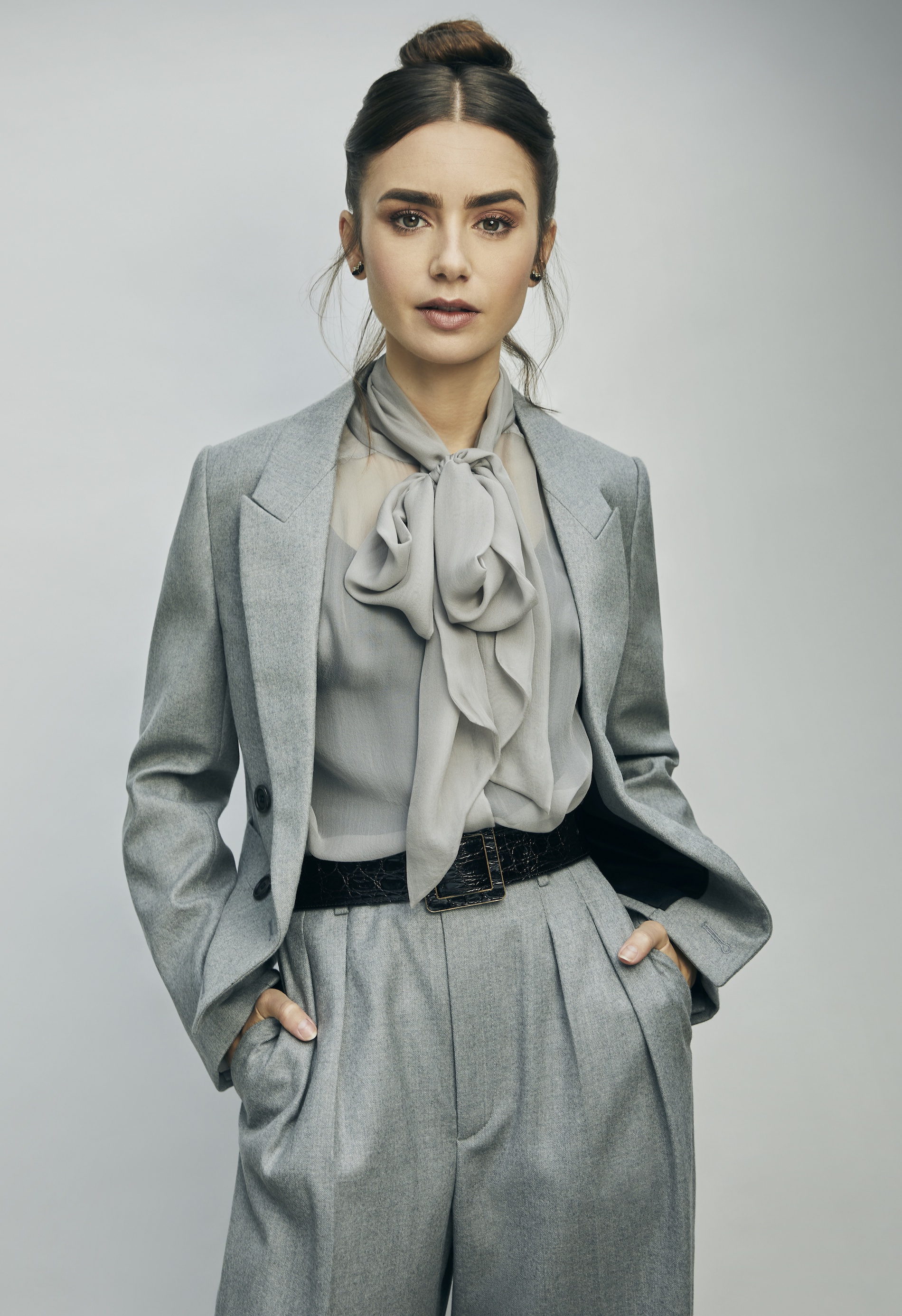 Ten years and more than two dozen acting credits later, Collins is still earning her roles. She auditioned for both “Emily in Paris” and “Mank,” even with a number of leading turns already to her name. (“If there’s a project like ‘Mank’ with a creator like David Fincher and he needs to see it on tape or in a room, you do it,” she says. “He’s a genius for a reason.”) Reflecting on what makes an ace audition, she says the secret to nailing it is knowing that “it’s not just in what you say—it’s in how you listen to the other person. It’s a conversation between two people. If you’re just viewing [the sides] as dialogue, it’s never going to connect for you.”

Plus, by now, she’s learned to prepare in a way that allows her to be agile in the room. “As long as you feel like you understand the person that you’re going in to play, you can react to the other person reading in a genuine way. If we go off-book, if we improv, as long as you know who the person is that you are in the scene, you can have those more freeing moments,” she explains. And every casting process is different. “Sometimes that casting process lasts weeks. Sometimes it lasts days. Sometimes it’s instantaneous. Sometimes you don’t hear.”

READ: How to get cast in a Netflix Original Film

That might sound casual for a business in which not hearing back means not getting the job, but Collins has made her peace with it. When she was preparing to fly to France to begin work on “Emily in Paris,” a job she landed on her 30th birthday after a monthslong period of meetings and auditions, she had the chance to put herself on tape for “Mank.” She sent it off with barely a second thought beyond: Why wouldn’t I put myself up for a David Fincher project? She threw herself into a busy shoot, playing the bubbly, optimistic, slightly oblivious Emily Cooper in virtually every scene of the freshman series. Then, she got the “Mank” call mid-“Emily” shoot. In a move that seems routine today but was new to Collins in summer 2019, she Zoomed with the legendary director and learned that she’d booked the role of Rita Alexander, an assistant of sorts to the titular Mankiewicz who typed his pages each night and generally kept the writer in line.

From a sunny depiction of fictional present-day Paris, Collins went back in time to tell a true story that did not hide its blemishes. “I had to step into a completely different time period, and there wasn’t much information on Rita Alexander that I could find. There’s not that much information that we know about Herman Mankiewicz, let alone Rita. I had to research women of that period and rely on conversations with hair and makeup and our incredible costumer to feel the part,” she remembers. “You walk differently; you handle yourself differently in a role from a different period. I love disappearing into whatever character I play in a physical sense just as much as an emotional sense.” 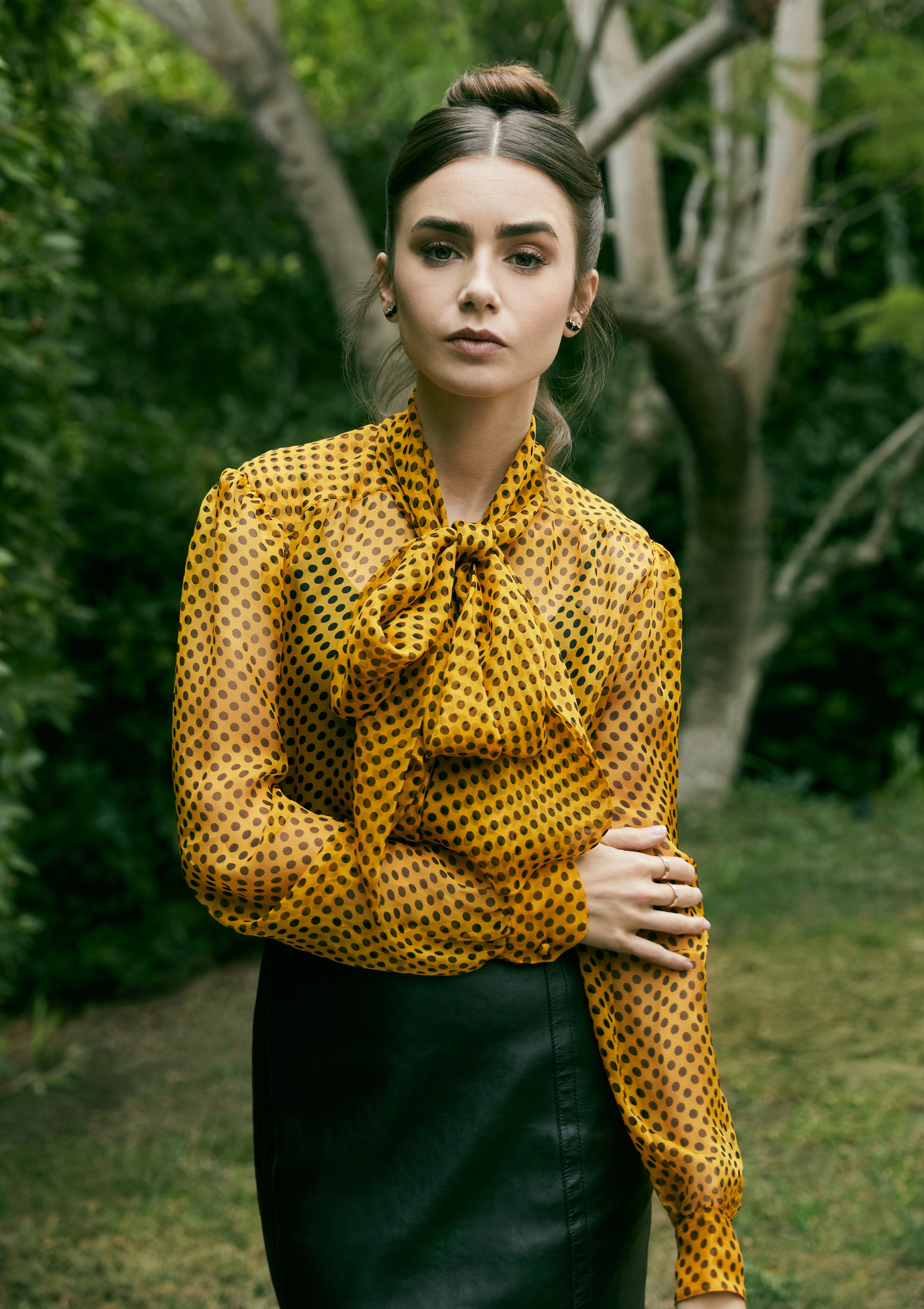 Collins says she used her time between takes on the set of “Mank” to delve into the dynamic between the onscreen personae of herself and Oldman. She spoke with other cast members about getting into the time period and how women behaved in the Golden Age of Hollywood. But that dedication wasn’t unique to this project. “I really love teamwork. I collaborate with everyone I can who has a hand in creating the character, and it all ends up piecing together. I do as much research as I can, but if you’re playing someone who is real and there’s not much to be found on them, you kind of have to step outside of that person and pull from different aspects of other women of the time period and people you think she would maybe have been inspired by,” Collins says.

That collaborative aspect of storytelling is partly why Collins added a new title to her lengthy résumé this year with her first foray into producing on “Emily in Paris,” which was just picked up for a second season. “I just love all facets of storytelling, so producing was a no-brainer. My friends who produce tell me all the pieces that they’re putting together in a puzzle, and I love being a part of that,” she says. “I think it was something that I was always going to do. I would love to direct one day. I’ve written a book [“Unfiltered: No Shame, No Regrets, Just Me.”], but maybe I’d write a screenplay one day. There’s no part of this industry that I don’t find fascinating. I’m constantly talking to all the heads of departments and wanting to learn and understand, because we all collectively make the end result happen. I’m excited to kind of take what I’ve learned and move forward to other projects one day.” 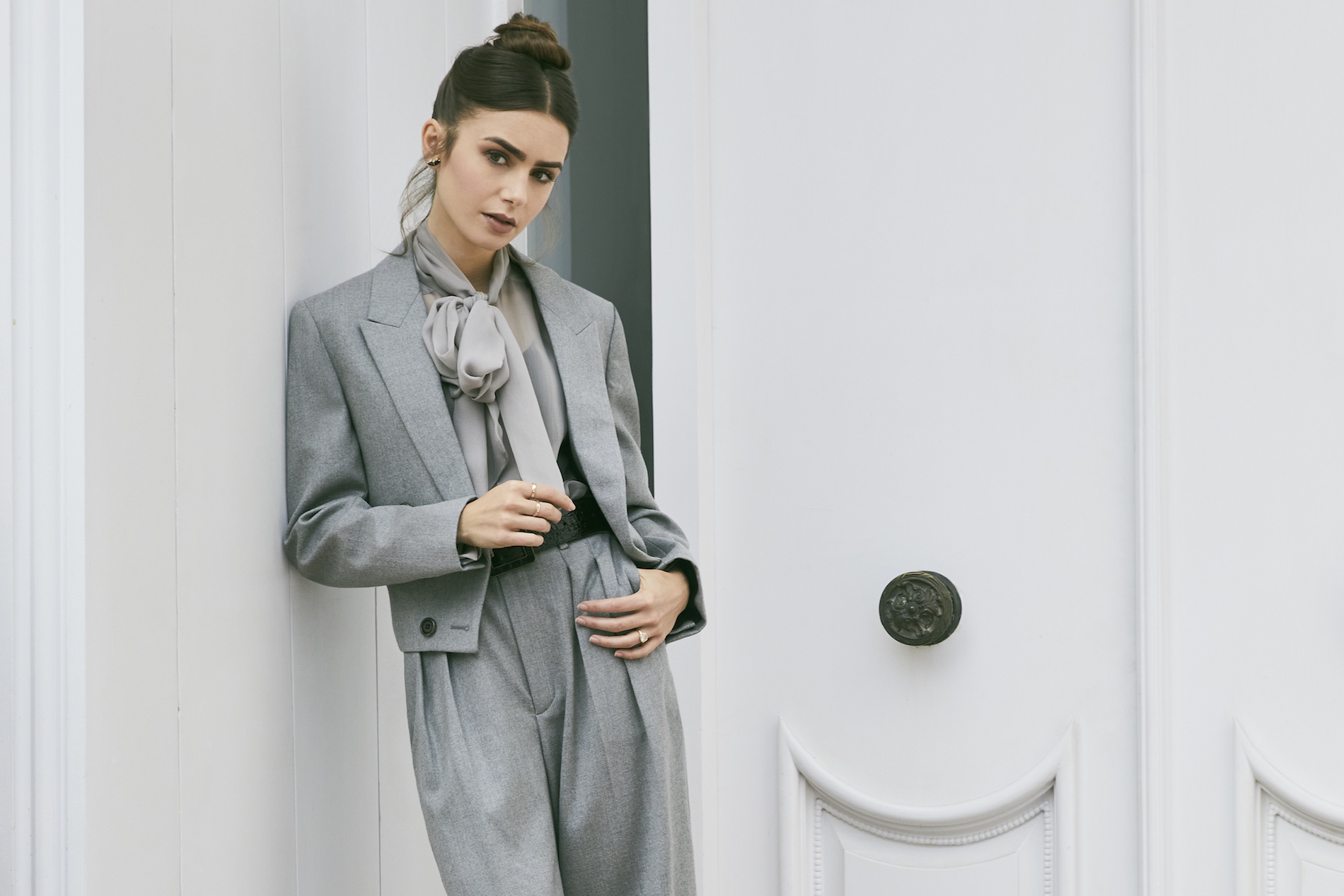 But until she’s back on set, she’s embracing time at home with a renewed appreciation for acting exercises and auditions between outdoor adventures with her fiance, filmmaker Charlie McDowell. “Having been in quarantine or having not been on a set for a while and not being creative in the way that we’re used to, any audition or anything that you get to read or even have a conversation about going out for I use as a fun, experimental 25 minutes, or however long it takes.

“The beautiful thing about what we get to do within this industry is heal in some way,” she adds. “Whether that’s healing through a laugh [or] healing through a cry, if it’s something you can physically relate to or it’s something that you know someone else has gone through, art heals and art inspires. That’s what I want to find within the characters that I play, no matter what genre it is. That’s the real gift of filmmaking, movie-making, [and] making TV. Just art in general.”

In Collins’ case, it’s clear that hers is a gift that will keep on giving.

Photographed by Gari Askew II on 10/8 in Beverly Hills, CA

Elyse Roth
Elyse is a senior editor at Backstage, where she oversees all casting news and features content, including her weekly casting director Q&A series, In the Room. She came to New York from Ohio by way of Northwestern University, where she studied journalism, and now lives in Brooklyn. She might see and write about awards-worthy films, but Elyse still thinks “Legally Blonde” is a perfect movie and on any given night is probably taking in some kind of entertainment, whether it’s comedy, theater, ballet, or figuring out what show to binge next.
END_OF_DOCUMENT_TOKEN_TO_BE_REPLACED