After two of his three Tony Award wins, in 2008 and 2011, Mark Rylance recited the work of poet Louis Jenkins in lieu of a traditional acceptance speech. “Unlike flying or astral projection,” he intoned from memory, holding the trophy he’d just been given for his performance in Jez Butterworth’s “Jerusalem,” “walking through walls is a totally earth-related craft, but a lot more interesting than pot making or driftwood lamps.” 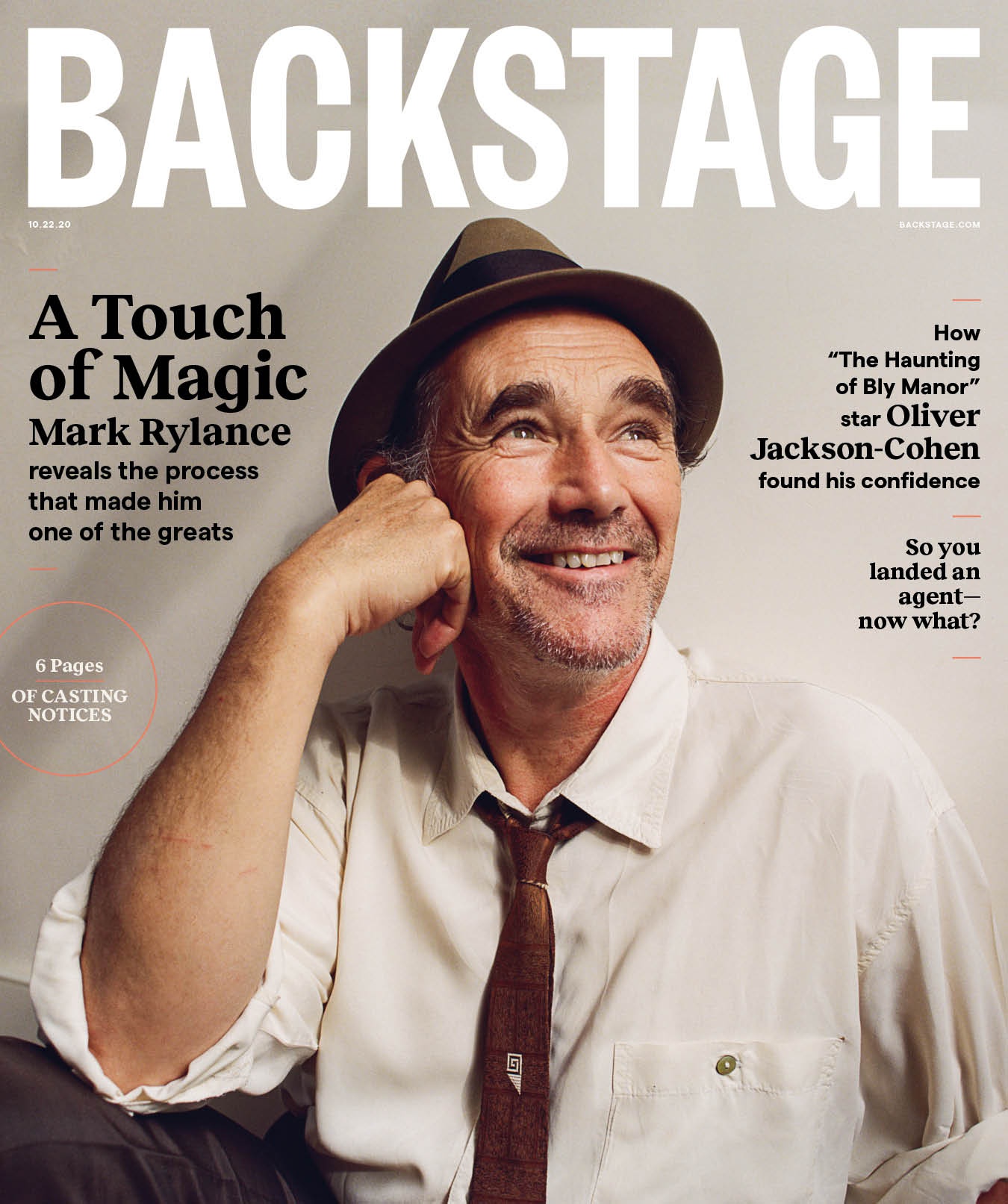 The moment was deeply triumphant, but those watching in the audience at the Beacon Theatre or on television at home didn’t know the half of it. “I couldn’t speak very well when I was a young boy, and I was taken to speech therapy classes,” Rylance recalls. “I was—I still am—primarily a listener and an observer, in that I didn’t have a lot of faith in my tone and my mouth’s ability to keep up with the speed of my thoughts and my imagination.”

That Rylance, regarded by many as one of our greatest living actors and by even more as the greatest living interpreter of Shakespeare, struggled with language early on has colored his entire understanding of acting. In fact, it is what lured him to the craft in the first place. 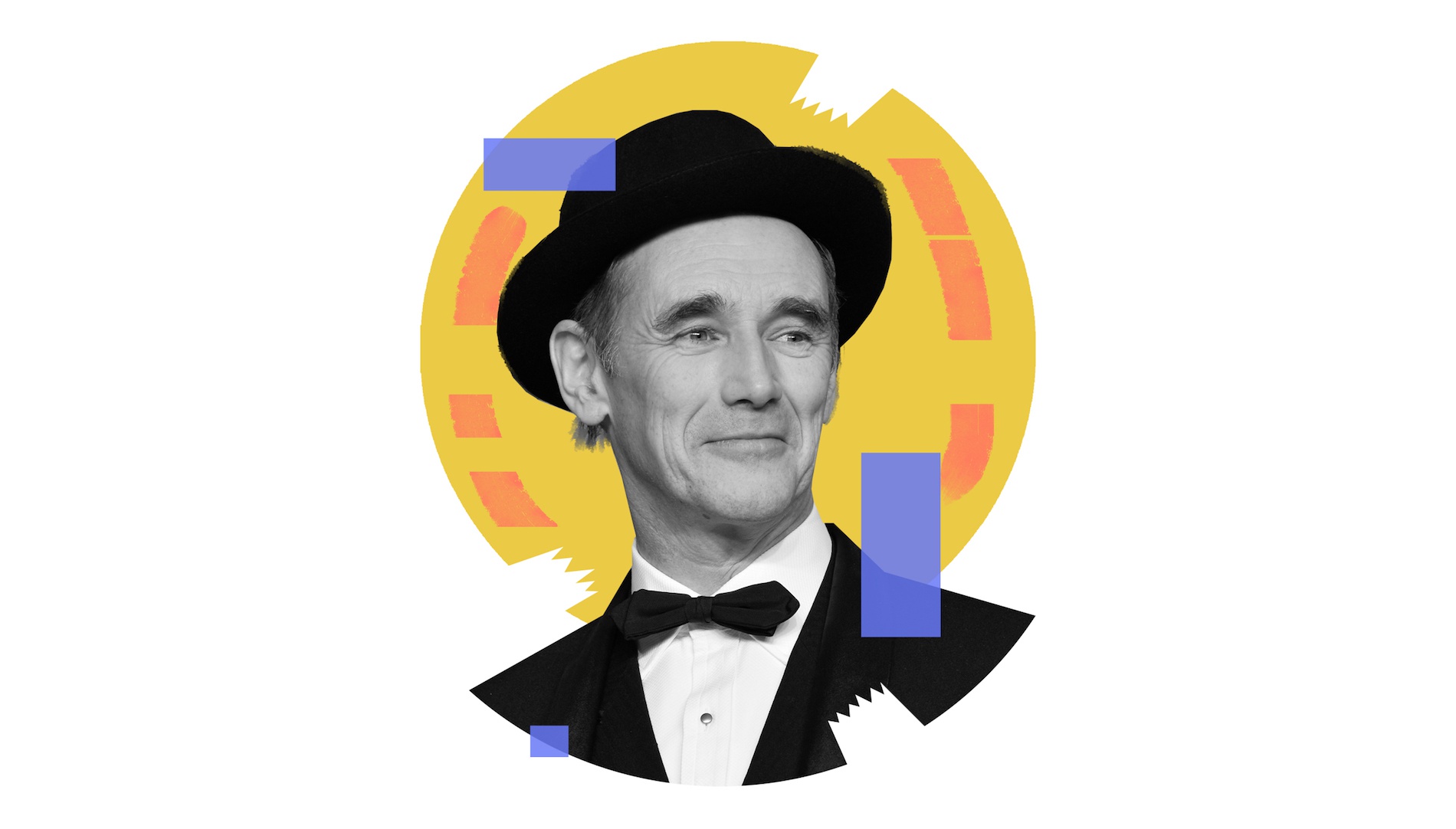 “I find the way people speak is the thing that really obsesses me. When I feel like it sounds right in my own ear, then I feel I’m in the person.”

“The common conception of actors is that we are showoffs, that we like to have a lot of people looking at us,” he says. “And actually, in my case, it’s the absolute opposite that caused me to be an actor, in that the only way I really felt comfortable when I was a kid was to create imaginary situations.” In imagination, Rylance insists, there is dissociation: “You have a need to convince yourself you’re not there, that it’s someone else standing in front of people. Your own need not to make a fool of yourself, to not be thought of as bad—you have to overwhelm that with something, and so you overwhelm it with the objectives, the actions, the obstacles, and the characteristics of the character you’re playing.

It’s just after 10 a.m. GMT on an early autumn day, and Rylance has no qualms about wading into ponderous territory, even as he’s still finishing his preferred hot beverage. He’s chatting via Zoom from his London home, the city in which he has primarily lived, worked, and advocated for various social and political causes since finishing high school stateside. He has heavily invested in the U.K.’s institutions, as they have in him; after training at the Royal Academy of Dramatic Art, Rylance made his professional debut at the Citizens Theatre in Glasgow. That was in 1980, 15 years before he went on to serve a 10-year stint as the first artistic director of Shakespeare’s Globe, where he has starred in 18 productions to date.

He’s won two Olivier Awards for his work in the West End and was knighted in 2017 for his contributions to theater. But his successes aren’t limited to one side of the pond. He’s appeared in six plays on Broadway, and in 2016, he won the Academy Award for his portrayal of a real-life 1950s Soviet intelligence officer in Steven Spielberg’s “Bridge of Spies.” He got an Emmy nomination for the BBC Two adaptation of “Wolf Hall,” and had standout roles in “Ready Player One” (a reunion with Spielberg), “Dunkirk,” and Disney’s live-action “The BFG.”

All this to say that there is no Mark Rylance “type.” On a dime, he gives you towering, then neurotic, and he can match any regional dialect down to the vowel. Given his fixation with language, it’s no surprise that’s where he starts with every new character.

“I find the way people speak is the thing that really obsesses me,” he says. “When I feel like it sounds right in my own ear, then I feel I’m in the person. And when it doesn’t sound right, that’s very panicky for me. With Colonel Abel in ‘Bridge of Spies,’ there was a tiny bit of footage of him being arrested, but that was very key to me, just watching that over and over again.” 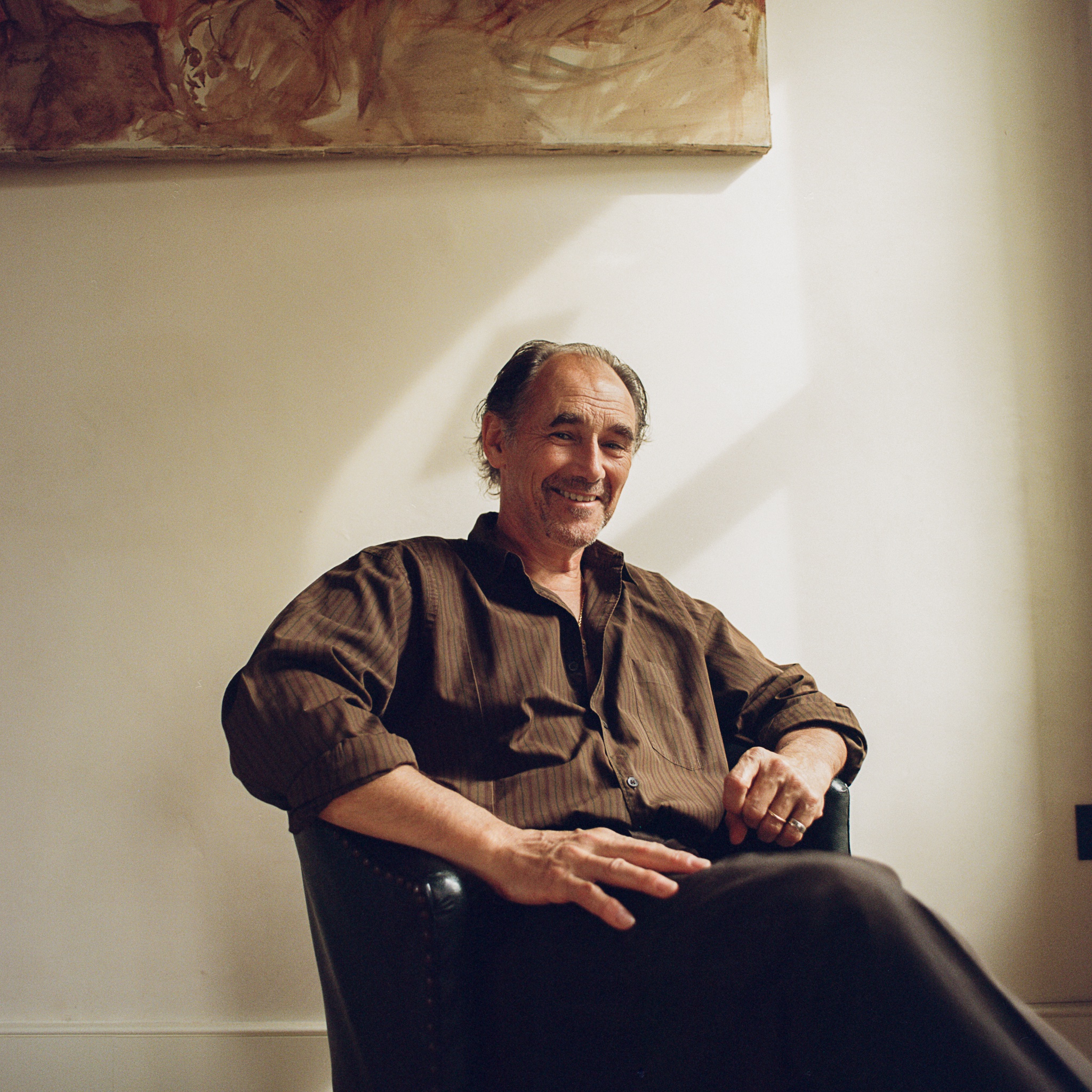 When Rylance says a character’s verbal tendencies obsess him, he means it. Currently, he’s preparing to play the golfer Maurice Flitcroft, who, in 1976, shot the all-time worst round at the British Open Championship. “The worst golfer in the history of golf,” Rylance says with a chuckle. “Fortunately, there’s a little clip of him on breakfast television back in the early ’80s. That little clip will become really essential to me. I will watch it thousands of times by the time the film is done. I’ll watch it every morning; I’ll have it on a tape recorder.”

But it isn’t just how his characters are speaking; it’s what they’re saying—and, more importantly, why. A grasp on their intent, even a tentative one, is crucial.

“So, here, I’m entering. I’m the first player to speak. I’m Richard or I’m Farinelli,” he says of the title roles in “Richard III” and Claire van Kampen’s “Farinelli and the King,” both of which he’s performed in London and New York. “I’ve got to go out and say these words. What do I want? What’s in my way? Why am I speaking? What do I need? What do I want to say?

“But actually...” he recalibrates for a moment. “I’ve even been questioning that as limiting, too. There’s a danger, even with those concepts in your mind, of limiting your ability to be present. You have to be careful about that, about plotting and planning results, I find.”

READ: How to Learn an Accent for an Audition

Despite the endless hours he commits to finding the way a character should sound, Rylance becomes depressed every time he watches one of his films, convinced he didn’t get it just right. It’s why he says that he will no longer watch his on-camera performances; the self-criticism is not constructive. More perilously, thinking too closely about your own performance, by ridiculing it or otherwise, is the enemy of the actor’s eternal question: What is the objective? “Absolutely simple answer: to be present,” he says.

“I find onstage…there’s a connection between the actors that’s not just psychological, but actually lifting into an area of a collective spirit.”

“When I was younger, my own critical thoughts were, at times, completely overwhelming and made the process very painful, so that many times, I really thought I should quit, that I couldn’t cope with it,” he says. “And they obviously can stop you from being present with the whole of yourself. The great moments are when you feel completely present with your whole body and your mind and your emotions, and even your soul and spirit. You just feel, in a way, more alive than you do when you’re not acting, and that’s the drug for me.”

In talking about acting, Rylance frequently references the apex of the physical and spiritual worlds, sounding more like a practitioner of religion than craft. When asked if he considers acting to be a game of psychology, he shakes his head. Though the psyche is present, the brain alone, he’s certain, could never account for the liminal space created during a performance, particularly a live performance.

“Yes, it’s psychological, but it’s also very physical and visceral. Visceral, I think, is the word. Sensual,” he says. “Of course, psyche is everywhere—in the physical world, in the spiritual world, in between. The waking world sometimes seems more like a dream than the dreaming world. Particularly in the theater, there are moments of collective unconscious and of a collective spirit in the room [that] you can’t create. It’s a random thing; it’s a touch of grace, really. I find, onstage, I get new thoughts, I get new awareness of what the story is about. There’s a connection between the actors that’s not just psychological, but actually lifting into an area of a collective spirit.”

Tapping into that sublime present can frequently prove challenging, particularly during a long run of a play. However, Rylance has found some effective tricks. For starters, he allows himself to transcend his physical surroundings by first becoming intimately attuned to them. He also takes time to envision that evening’s audience—where they came from, the method they used to purchase their tickets, the young people who will watch and may themselves become actors one day. 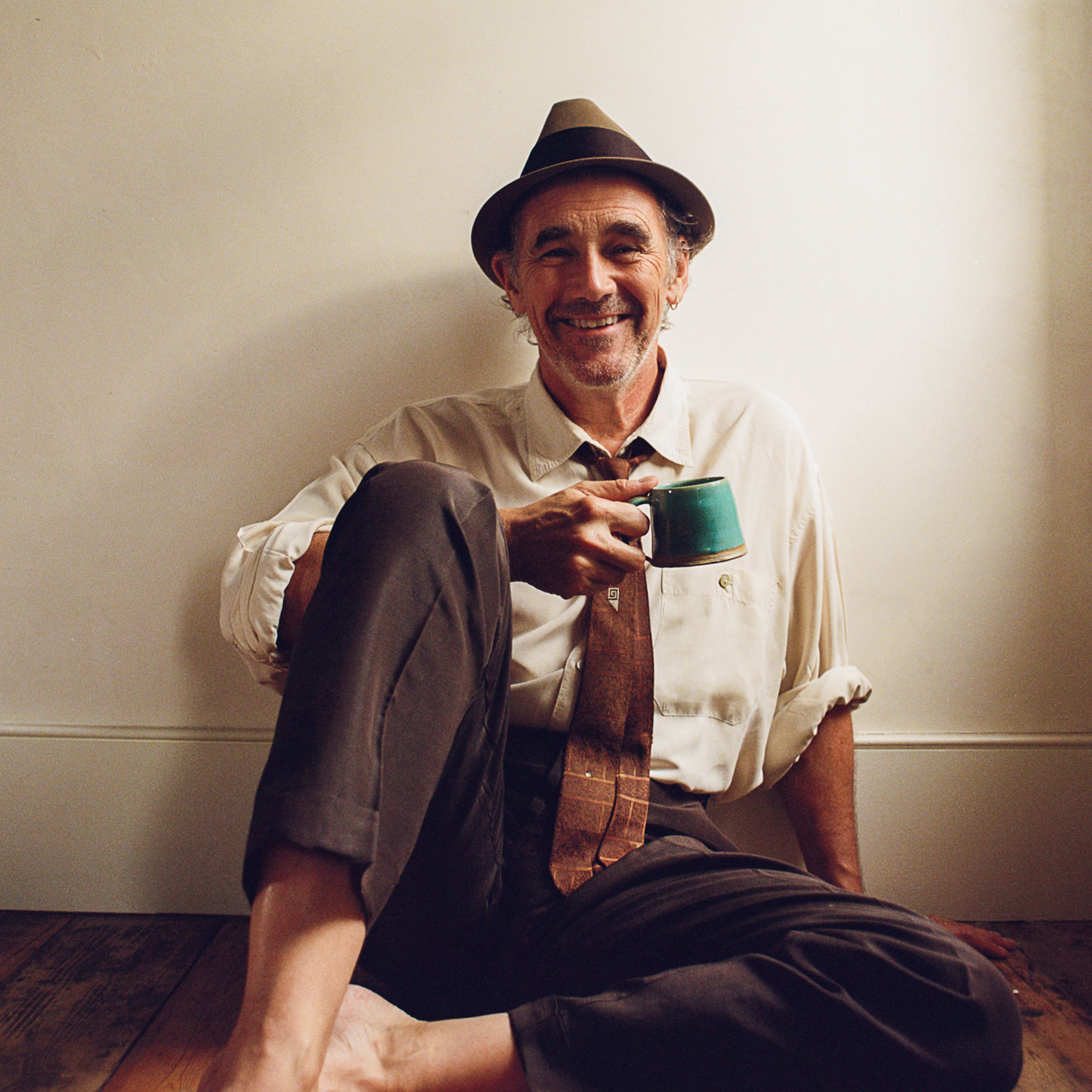 “I imagine, quite intensely, the place, what the present is, because the present has all these influences—some tangible, some intangible, some conscious, some unconscious. Your mind will be focusing on aims and objectives or past successes or failures, and pull you out of the present,” he says. “One of the things I really try to do is wake my senses: my smell, my hearing, my touch. And so I like to play a game of volleyball in the stalls of the theater, and we’ll play for about half an hour before acting a play. That just brings you right into the present, and it also awakens a kind of childish sense of play, which is the other thing you really need on a film set or on the stage: wanting to play, really.”

Though his heart is in—and of—the theater, Rylance continues his prolific on-camera streak. He’ll likely enter the awards conversation again next year for his standout work in Aaron Sorkin’s “The Trial of the Chicago 7,” which is now streaming on Netflix. Rylance’s performance has already been singled out among those of Jeremy Strong, Sacha Baron Cohen, Eddie Redmayne, and Yahya Abdul-Mateen II. But don’t expect Rylance to be a regular fixture on the press circuit during this unusual awards season. (He famously did no publicity or campaigning the year he won the Oscar.)

As is by this point clear, he is not in pursuit of industry prizes or prestige. Though he insists that acting healed him as a young person (as well as making him less susceptible to drugs and other forms of release), it’s now something that gives him overwhelming joy. The act of unearthing, of searching for a character’s reasons to be, is simply what he loves to do.

“Underneath those outer things of convincing myself I am this person, I’m hunting for what the person needs, what drives them. Because if you get that desire right, the thoughts and the actions will follow correctly,” he says, speaking to the actor’s ever-elusive process. “The mind gives shape to the unconscious needs and desires of what you might call the heart. And then the will decides which form is going to be spoken or acted upon.

“This is all very obvious stuff,” he adds with a wink. “I’m not very clever.”

Photographed by Henry J Kamara on 9/23 in London

Casey Mink
Casey Mink is the senior staff writer at Backstage. When she's not writing about television, film, or theater, she is definitely somewhere watching it.
END_OF_DOCUMENT_TOKEN_TO_BE_REPLACED