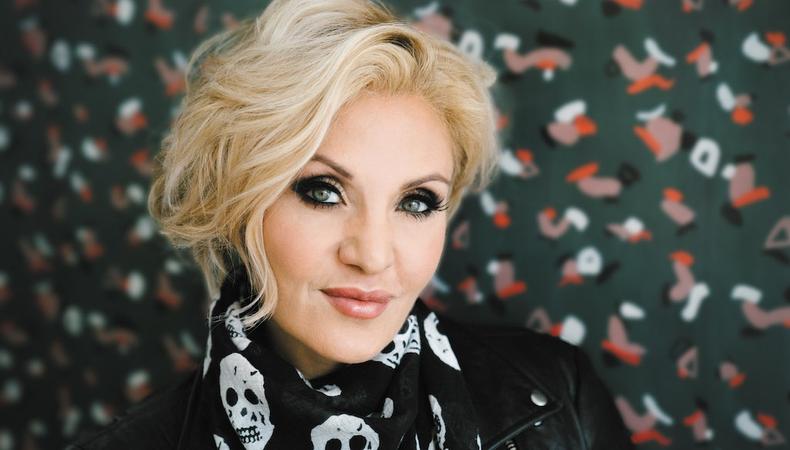 Rodeo Drive, baby! Orfeh sings about that luxury strip of commerce eight times a week in “Pretty Woman: The Musical,” one of this Broadway season’s early breakout hits. In the role of Kit, best friend to the titular Vivian (played by Samantha Barks), the Tony nominee returns to Broadway for the first time in a decade, and is tasked with no small feat: bringing one of the most beloved films of all time to musical life onstage.

Luckily, Orfeh has made a career of doing just that, having previously starred in Broadway’s “Legally Blonde,” Footloose,” and “Saturday Night Fever.” Now settled into her run at the Nederlander Theatre (the musical opened this summer), the veteran performer dropped by Backstage HQ to talk re-creating a film role for theater, sharing the stage with her husband Andy Karl again, and her not-suitable-for-children vocal health secret.

Bringing a role from stage to screen is a delicate balance.
“I’ve pretty much spent an entire career in musical theater doing movie [adaptations]: ‘Legally Blonde,’ ‘Saturday Night Fever,’ it has been my calling card. With this particular film, and this particular role transfer, there was not a lot of Kit in the movie… When I came on board, it was already a given that the part would be increased, so I had a lot of freedom to create something that really has my stamp on it, with a loving and respectful nod to Laura San Giacomo [who played Kit in the film]. I have to respect the source material and the originator of the role, but you don’t want to do a pale imitation of something that’s so great, so you have to inject your own spin on the whole thing.”

Broadway security is a (grueling) luxury.
“I take care of myself and I don’t do things that would compromise my health. I basically live like a nun in a two-by-four for my day to day existence. [Doing a Broadway show] is a nice breather, because in between it’s hustle, hustle, hustle, travel here, or go there. So at least you know for a finite period of time that this is what you get to do and you don’t really have to worry so much about anything else. It is a luxury—it’s not easy, it’s not a walk in the park. We make it look really easy, that’s part of the job, but it is not for the faint, and it’s not for the weak. You have to have the chops and the stamina to do eight shows a week.”

Orfeh’s secret vocal health potion is…
“I’m a champion texter because there’s a certain time in the evening I don’t speak. The best vocal rest is literally vocal rest, you just have to shut up. Obviously, don’t smoke, I don’t drink. I try not to yell at people driving foolishly in the streets. I do take Slippery Elm tablets twice a day religiously. This is my own personal trick: I always tell the cast, listen, I don’t drink so if you smell it on me [it’s because] I gargle with Hennessy. I have for my whole life. I spit it out, but I gargle with Hennessy. Many years ago I got it into my head that it kills germs—and it does!”

She has a method for keeping a long-running show fresh.
“[Most] people have not seen this show, and have not seen your performance, and have not heard these songs. They haven’t had the experience, so you’re playing to new eyes every night. That’s how I keep it fresh… You have to remember that these people, who’ve just spent however much money on those tickets, have not seen this before, so you may know what is gonna happen and what your performance is but they don’t. That’s always what’s kept me fresh, because they don’t know.”

With her husband Andy Karl playing Edward, it’s the best of both worlds.
“It is the best thing in the world to be in the same job, because with us it’s either we don’t see each other for three years, or we’re in the same show. We won’t see each other for five years then we’re doing a bunch of concerts together. It’s very feast or famine in my house. Either we’re on the exact same schedule or literally it’s two ships passing in the night. At this point in time, thankfully, we’re in the same kind of mode and that’s wonderful. He’s having a great time. The actors in this show, this group of people, it’s one of those times where we actually do like each other as much as it seems like we do.”

On theater as the actor’s true medium.
“Because we’re live, every night there’s a different turn of phrase, there’s a different realization, there’s a different moment of clarity where you go, ‘Oh, that’s really what’s happening here.’  That’s the beauty of live theater. You do it eight times a week and eight times a week you get a chance to do it better. In film and TV, that’s it, you can’t go back and say ‘God, I wish you had used take three.’... It’s been said, theater in general is the only actor’s medium, where the actor is generally who gets to inform the audience and the piece itself. So again, we’re very lucky that we get to do this.”

Casey Mink
Casey Mink is the senior staff writer at Backstage. When she's not writing about television, film, or theater, she is definitely somewhere watching it.
END_OF_DOCUMENT_TOKEN_TO_BE_REPLACED