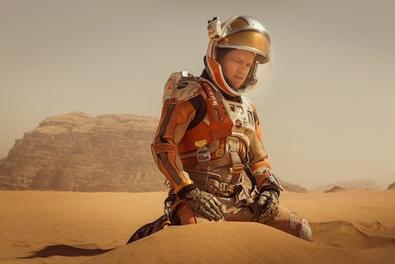 From the moment its official trailer was released in August, nothing about “The Martian” felt like a typical outer space film. One minute into the preview and the music shifts from heart-pounding to Jimi Hendrix’s “All Along the Watchtower”and its protagonist Mark Watney (Matt Damon) cracks a joke; recording a video to prove he’s survived a storm on Mars he says, “This will come as quite a shock to my crew mates, and to NASA, and to the entire world…but I’m still alive. Surprise!”

Left for dead after the storm—his Ares 3 crew (Jessica Chastain, Kate Mara, Michael Penã, Sebastian Stan, and Aksel Hennie) are forced to abort their mission and head back to Earth—Mark awakes days later and begins developing plans to make contact with NASA and to last the next four years (the amount of time it will take for another crew to rescue him). How will he do it? In a line that exemplifies the film’s humor, he says, “I’m gonna have to science the shit outta this.”

Unlike director Ridley Scott’s previous sci-fi stories including “Alien,” “Blade Runner,” and “Prometheus,” “The Martian,” based on Andy Weir’s best-selling novel, lacks extraterrestrials, unknown planets, and imminent death. No one’s running for their lives, and there’s enough oxygen to go around.

Capturing that quirky tone of humor in what was just played as sheer terror in “Gravity” required unconventional casting and rehearsal procedures. “All I had to do was go and audition for Matt Damon,” the director jokes, since the actor was already signed onto the project when it landed on Scott’s desk. The real work came when assembling the rest of the A-list cast.

The film boasts Chiwetel Ejiofor, Jeff Daniels, Kristen Wiig, and Donald Glover, among others. And when casting at that level of aptitude, Scott says, a cup of coffee is all it takes.

Trusting his actors is key since Scott doesn’t much believe in traditional rehearsal. (“I think rehearsals can kill things stone dead unless you’re doing a play, and then it’s a necessity, right?”) Instead, the three-time Oscar nominee prefers to discuss the material with his performers and just let it resonate.

“Rehearsal for me now is just talking at length about material and the targets of the material. The real detail is getting into the scenes and the targets in the scenes,” he explains. With his actors he’ll discuss the emotional target of each scene by asking the questions: Is it funny? Is it not funny? What are we trying to do here?

“The conversation becomes very pragmatic,” he adds, noting he’ll even shoot a rehearsal the day of filming to get the most authentic take as possible.

Because while “The Martian” shares certain aspects with big-budget space flicks—sweeping shots of “Mars” (Jordan and Hungary in this case) or its characters floating through the abyss, it’s the film’s heart that puts it in a galaxy all its own.