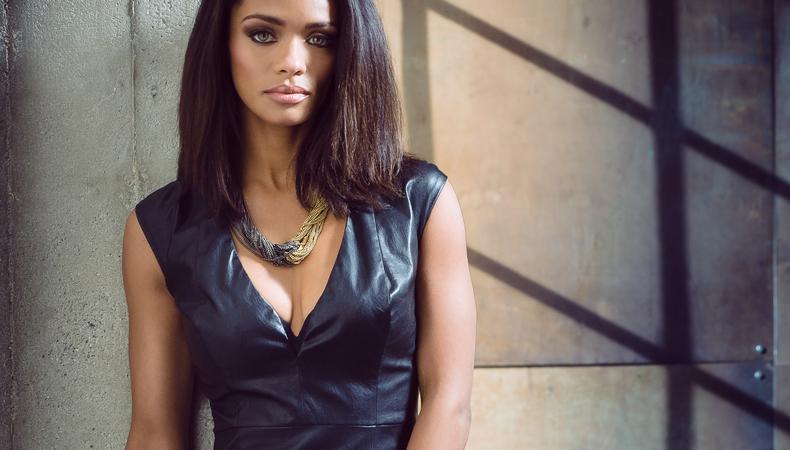 “I have to say, as a young woman of color, and this may sound controversial, in sci-fi, anything is possible,” she says. “In sci-fi I can belong to the military. In sci-fi I can have an interracial love affair; I can be a revolutionary. It allows people this world where they don’t have to be attached to their thoughts and viewpoints and values as they stand currently in their lives today, but can imagine the possibility some time in the future where things have changed.” That possibility, she adds, creates opportunity for her as an actor. “People would call predominantly doing sci-fi being typecast or being in a niche, but I feel like within that genre there is so much opportunity to be so many things, whereas I sort of run up against roadblocks in other types of work.”

McClure’s new series, “Hemlock Grove”—which premieres April 19 on Netflix—is fantasy, not sci-fi, but it falls squarely in the world of genre fiction in which the actor has built a formidable TV career. We spoke with McClure about what she’s learned working in the realm of the fantastic.

Don’t fear death
“Battlestar” was notorious for ruthlessly eliminating fan-favorite characters, often with little or no warning. As Dualla—aka Dee—McClure faired better than many of her castmates. Her character committed suicide midway through the fourth and final season of the series. “It lasted a lot longer than I originally thought or expected from a 10-line, straight to camera audition that lasted all of four minutes, if anything,” she says. “It just kept moving forward. ‘Yes they want you for the miniseries.’ ‘Yes, they’re going to book you for the year.’ ‘Yes, they’re giving you a multi-year contract.’ Every time it was a surprise to me.”

Take your lines seriously, whatever they are.
Dee developed into a pivotal character over the four seasons of “Battlestar,” but in the beginning she was, as McClure puts it, “the Uhura of the ship,” spouting jargony directives to unseen, unnamed characters through a headset. “There was a lot of ‘Viper, Viper, Red One, come alongside, refuel. Basestar, four-niner,’” she says. “I was like, ‘What am I saying?’” But McClure quickly found a way to give context to what could easily read like nonsense. “With stuff like that, I really thought, ‘She’s a military person. She takes her job very seriously. Other people’s lives are in her hands. It may sound like garbled noise, but what she’s really doing is coordinating it so that all these pilots get to come home, and ultimately these pilots are her colleagues and friends, and what she wants to do is get them home safe.’”

Learn from you costars
“‘Battlestar was sort of like college for me,” McClure says. “I was with these veteran actors that I got to watch every day and learn from.” The most important thing she learned? “Rule number one—know your lines,” she says with a laugh. “I watched Edward James Olmos, this man who has been doing this since longer than I’ve been alive, and that was one of the really basic, simple things that he was adamant about. I would see him rehearsing over and over and over and over and over again so that he was not the one that missed his cue or wasn’t there when the other actor needed him.”

Have fun.
It’s important, according to McClure, to remember that acting is about play. “It’s fun,” McClure says. “Even when the content is so heavy or so dark or so emotional that you’re swimming in water, remember that it’s an experiences that not everybody gets to have. So revel in it.”