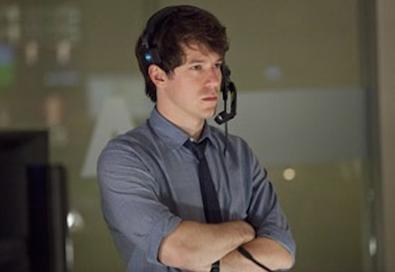 At age 22, John Gallagher Jr. won a Tony award for his portrayal of Moritz Stiefel in the rock musical “Spring Awakening.” Now the seasoned theater actor spends his time as senior producer Jim Harper in HBO’s "The Newsroom."

Gallagher says Aaron Sorkin’s writing for television is not unlike playwriting with its rapid-fire dialogue. “I had been doing a play in New York City [‘Jerusalem’] that was three-and-a-half hours long when I showed up at ‘The Newsroom’ to shoot the pilot last summer,” he says. “It was almost helpful to work on a play right up until the point that I got there because I felt that the part of my brain used specifically for memorizing dialogue had already been quite warmed up at that point.”

Gallagher was drawn to Jim Harper because while he is really good at his job, he is hopeless when it comes to his personal life. “I wouldn’t be surprised if he’s never really engaged in a serious relationship in his young life to date,” Gallagher says. “Relationships are something that he probably always ignored in order to focus on his work.”

Jim has a crush on Maggie, played by another theater veteran Alison Pill (“The Miracle Worker”), but hasn’t been able to make a move yet because of her on-again/off-again boyfriend Don (“Other Desert Cities’ ” Thomas Sadoski). “When he meets Maggie, he finds kind of a kindred spirit in her, someone who is just as dedicated as he is to the profession, but at the same time, slightly awkward and fumbling in her social life,” Gallagher says. “As much as he likes her, he recognizes that she does have a boyfriend, and it’s somebody who they all work with. So he’s very careful not to step on anybody’s toes and do something that’s going to affect the workplace.”

With so many theater actors on the show, does it ever feel like a theater environment on the set?
John Gallagher Jr.: It does in the sense that it’s such a strong ensemble. There are so many great characters played by so many wonderful actors. And there’s a great camaraderie on the set not unlike the kind of camaraderie you find when, or at least I found, when working on plays. I’ve done several plays at the Atlantic Theatre Company in New York, and it’s one of my favorite places to work because it’s such a small, intimate environment. You end up sharing one dressing room with a curtain down the middle—one side for the men, and one side for the women. And it’s some of the most fun that I’ve ever had working on a play when you find yourself stuck together because you have no choice but to bond. On a television series you all get your own trailer, but there is a really similar feel of everybody’s there to work really hard and everybody’s there to have as good of a time as we can working on it.

Has being on the show affected how you watch the news at all?
Gallagher Jr.: Yeah. I certainly look at it a bit differently now that I feel that I have at least somewhat of a better grasp of how it’s done, how it’s made, and how it’s compiled, and what happens at the beginning of the day that leads to that 8 o’clock breaking news broadcast. Other than that, I still find that I get more and more of my news online. I find that through social media like Twitter and so forth, it’s so easy to stay very current and updated. All you need to do is check your phone and refresh it every now and then so I haven’t really been watching a lot of cable network anchors. I watched a lot of it in gearing up for the show, preparing to shoot it, so much so that I think I burnt myself out on it for a little bit.

You do a lot of music gigs. Do you plan on continuing that, since the show just got renewed?
Gallagher Jr.: Definitely. I’m really hoping that I can find the time to actually get in to a studio and record something before I go back to start shooting the second season. That’s something I’d really like to do because I’ve been putting it off for a long time now. Hopefully I can get something recorded before we start season two. People who have come to my concerts over the years, and there haven’t been many outside of New York—I haven’t been able to tour because of my schedule—but the crowds have been really loyal. Despite the fact that I’ve never given them something that they can buy and hold and read the liner notes to, they’ve been very generous. I feel that they are way overdue in deserving a record.

Jim and the other people he works with like to go to the karaoke bar after work. Do you ever karaoke with the cast?
Gallagher Jr.: Oh, I’ve definitely logged some hours in the karaoke bar. We haven’t done it as a cast. When we had our wrap party, we were all secretly hoping that maybe they had brought in a karaoke machine, but I’m sure it’s only a matter of time once we get to season two before somebody has the brilliant idea of taking the cast out to a karaoke bar. I’d certainly be willing to participate.

On the show the characters frequent a karaoke bar, but we haven’t seen them actually karaoke.
Gallagher Jr.: Yeah, nobody on the staff of the newsroom has gotten brazen enough to get up and attempt just yet. I don’t think it’s really in the cards for anybody in season one to get up and sing, but maybe next year. You never know.

Do you have any hopes for your character next season?
Gallagher Jr.: My secret yearning is to find out a little bit more about his past. I’d love to know more about how long he’s worked with Mackenzie [Emily Mortimer], who is his boss and mentor. They have an interesting relationship to me. They’re like an old married couple. They finish each other’s sentences and they bicker all the time, but they can’t work or live without each other.