Winners of the 2011 Olivier Awards Announced 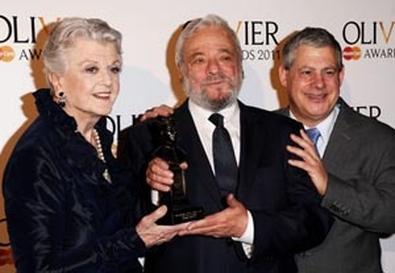 The National Theatre dominated with a combined seven wins for two of its productions, "After the Dance" and "The White Guard." "Legally Blonde " topped the musical awards, taking best supporting actress for Jill Halfpenny, best actress for Sheridan Smith, and best new musical. "Love Never Dies," the sequel to "The Phantom of the Opera," had the most nominations with seven, but won no awards.

The Society of London Theatre's special award was given to American composer and lyricist Stephen Sondheim. The evening ended with a tribute to Sondheim with Adrian Lester, Angela Lansbury, and 360 students from British drama schools performing "Our Time."

Last night was the first time the ceremony was broadcast live on both television and radio. The winners of the 2011 Olivier Awards are:

BEST ACTOR IN A SUPPORTING ROLE
Adrian Scarborough, "After the Dance"

BEST MUSICAL REVIVAL
"Into the Woods"

BEST ACTOR IN A MUSICAL
David Thaxton for "Passion"

BEST REVIVAL
"After the Dance" directed by Thea Sharrock

BEST COSTUME DESIGN
"After the Dance" designed by Hildegard Bechtler