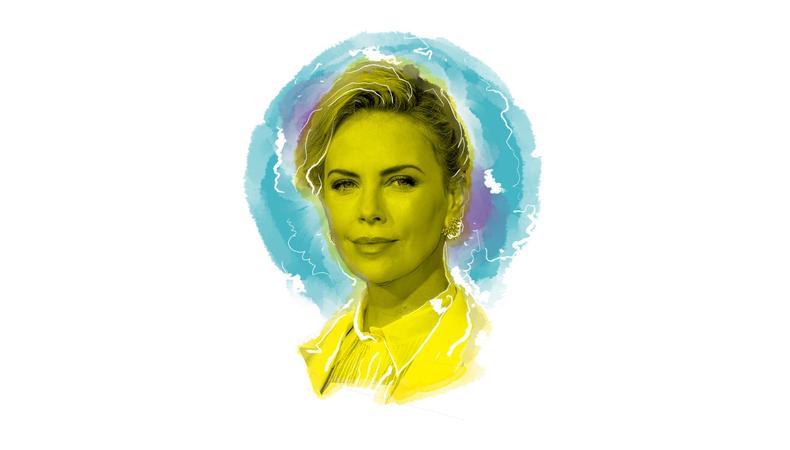 Charlize Theron has always been an actor who goes the extra mile, in terms of geography—the Oscar winner is originally from South Africa and made pit stops in Europe, New York, and Miami before moving to Los Angeles in 1994—as well as craft. She’s proven as much with transformative performances in films like “Monster,” “Mad Max: Fury Road,” and now “Bombshell,” in which she plays former Fox News anchor Megyn Kelly. Speaking with us, she recounts dousing herself with ketchup to play a gunshot victim mid-audition, getting a gesture of sympathy from Tom Hanks early on her career, and dealing with her audition nerves in our weekly questionnaire.

Charlize Theron Lets Us Inside Her Head + Her Acting Process

How did you get your SAG-AFTRA card?
I think I got it from a pilot that I did called “Hollywood Confidential” that never aired [in] ’95 [or] ’96.

What advice would you give your younger self?
Slow down. I felt so rushed. I think I would have enjoyed everything a little bit more if I’d just chilled out and didn’t get so caught up in the fear of auditioning and feeling like there was a clock ticking. I think a lot of young people have that. It’s difficult to say, because when you don’t know where it’s going to end up—there’s always going to [be] this rush to keep moving, and that’s not necessarily a bad thing. I think I was so rushed by all of it because I had this horrible fear that if this wasn’t going to work out, I was going to go back to South Africa. I knew what that life was like, and I just didn’t want to do that. There was this urgency that made me move through things so fast that I don’t think I necessarily enjoyed a lot of it. I make a point [to enjoy] it now.

What’s one screen performance that every actor should see and why?
I watched so much stuff. I always tell actors or producers [to] watch as much as you possibly can—and watch bad things. Watch a lot of things [so] that you can see all the mistakes and you can imagine how to fix those mistakes. I have a great capacity to watch a lot of bad movies, and I think it served me really well, because I can always refer back to a movie. Or, if you’re on set and somebody comes up with an idea, you [can be] like, “Well no, no, no, no, because they tried that and that did not work.” Obviously, I think you can only succeed in this if you really love movies. There are, of course, great classics that you go back to—there’s the way they went about something or something that an actor did that you always go back to. In general, I feel like it’s this tremendous appetite I have. And I can rewatch stuff, too—a lot! I’ve been in relationships where that’s been a problem.

What’s the wildest thing you’ve ever done to get a role?
I took a bottle of ketchup to a final audition. I had gone in five or six times, but my final audition, I knew all of the producers were going to be in the room. I took a bottle of ketchup—it was for “2 Days in the Valley,” and they were making me read this scene where [my character] runs into this house and she’s just been shot, and I just doused my body in ketchup. The door was closed, and I remember going out and all these secretaries were in the room. “It’s gonna get a little loud,” I warned everybody, and then I barged through this door and I smeared ketchup on everything. I just remember that everybody was just so shocked that, in a weird way, I thought they were just too scared to tell me I didn’t get the role. I was always willing to go as far as I possibly could. I think that there’s always been a mentality in my head of, like, “Unless I do that extra thing, how do I stand out? How are they going to remember you?”

What is your worst audition horror story?
Oh, God, I’m a horrible auditioner, let’s just start with that. I’ve had directors who, after they worked with me and we became friends, felt confident and more comfortable in telling me that [I was bad]. They were like, “You’re really bad at auditions.” For me, it goes back to the team of people around you. I rely on that so much, and you don’t have access to that in auditions. And so I struggle with them. I struggle walking into a fluorescent room and pretending I’m driving a car. It’s so self-indulgent, but at least I know my weaknesses! I struggled a lot with my nervousness. I would break out in hives. My neck would just get incredibly red and I would see black dots, and in the beginning, that was really hard for me. I remember auditioning for Tom Hanks [for “That Thing You Do!”], and I was so nervous that I couldn’t say the character’s name, and he just got up and he was like, “You know what, I really need to go to the bathroom. I’ll be back.” It was his way of giving me a breather. When you have people who have that kind of kindness, you’re incredibly grateful.

Ready to get back to work? Check out Backstage’s film audition listings!

Benjamin Lindsay
Benjamin Lindsay is managing editor at Backstage, where if you’re reading it in our magazine, he’s written or edited it first. He’s also producer and host of a number of our digital interview series, including our inaugural on-camera segment, Backstage Live.
END_OF_DOCUMENT_TOKEN_TO_BE_REPLACED