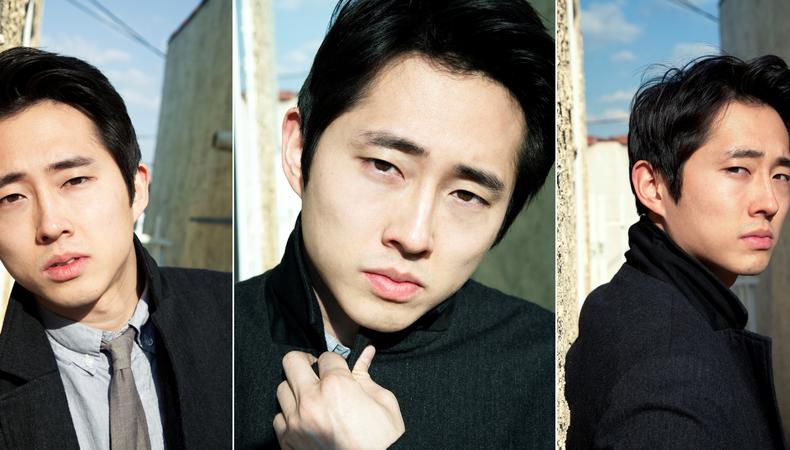 The tropes of the horror genre—sluts and minorities to the front of the to-be-killed line! Movie stars to safety until the climax!—have long been turned inside out on the hit AMC zombie drama “The Walking Dead.” An alpha male was unexpectedly killed at the end of Season 2, while an ensemble of talented yet equally expendable unknowns and character actors makes the next onscreen death impossible to predict. So when the bodies are counted, who will emerge from the splattered blood and brains as a star in the making?

Yeun plays Glenn, a former pizza delivery boy struggling to survive with the few remaining living humans in a post-apocalyptic world overrun by flesh-eating zombies. Whether displaying fearless intensity—or simply fear—when fending off the undead “walkers,” or vulnerability in the show’s quieter dramatic moments, Yeun has become a fan favorite whose role has seen satisfying growth and development (including the introduction of a love interest) over the course of two seasons. And following the deaths and disappearances of several major characters at the end of Season 2, Glenn is poised to be an even more prominent part of the team in the 16-episode third season, which premiered Oct. 14.

“He’s growing up and he’s being put in situations where he’s forced to do so, and it’s been really fun to play,” says Yeun. “What’s been great for me is how perfectly my journey as an actor has also kind of mirrored the journey of Glenn. I think Glenn in the beginning was me at 19—with a chip on his shoulder, wanting to prove himself, but always being suppressed by outside forces.”

Although Yeun has appeared in episodes of shows such as “The Big Bang Theory,” “The Walking Dead” is his first significant onscreen role. Glenn’s increasing confidence and self-awareness matches the actor’s professional maturation. He has learned to love the spotlight but admits that at first he was just trying not to be in the way.

“I think in the first season, I made really safe choices but it fit for Glenn, which was so lucky for me,” Yeun says. “I was exactly what he was—the newbie who was kind of like, ‘Uh, I think I know what to do, but I don’t know what to do.’ ”

That’s partly because the inexperienced actor was cast in “The Walking Dead” less than a year after relocating to L.A. to start his career. “It was actually more like five months,” corrects Yeun, laughing sheepishly. “That’s why when people ask, ‘How do you break into acting?,’ I’m like, ‘I have no idea.’ ”

After graduating from Kalamazoo College—where he took acting classes and joined an improv team while earning a psychology degree—Yeun went to Chicago to study improv and joined the Second City touring company. He moved to L.A. in October 2009, got a job waiting tables, and booked a few TV commercials. A promising audition for an ABC pilot went nowhere, but that left Yeun free to meet with writer-director Frank Darabont a month later to discuss a new show called “The Walking Dead,” based on the comic book of the same name.

Even if he only rarely ad-libs a line, Yeun says that improv’s central “Yes, and…” approach is crucial when working with a scene partner—or imagining a herd of hungry zombies. As he gains comfort in his craft, he’s also found friends and mentors on set such as Jeff DeMunn—a veteran character actor who played Dale for two seasons, then became one of the show’s latest casualties—to help him navigate the business of being an actor; DeMunn even gave him tips on managing his finances.

While ABC never picked up that pilot, Yeun is now one of the longest-lasting characters on a TV show where the average life expectancy is even more unpredictable than on “Lost” or “Boardwalk Empire.”

The decreasing population of core characters isn’t lost on Yeun. “As you lose some leaders, you have to fill in the gaps,” he says. “What’s been really cool is you grow as your character also grows in the hierarchy of the group.”