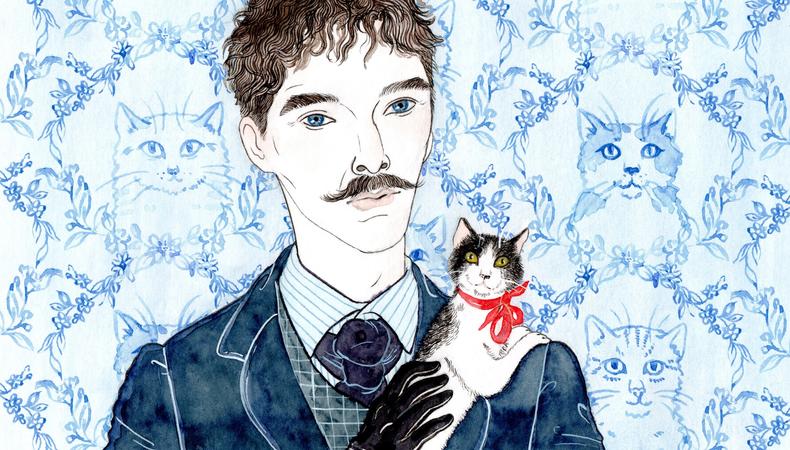 British casting director Dixie Chassay has populated the worlds of several classic period pieces, including Oscar winner “The Favourite.” She’s a frequent collaborator with that film’s director, Yorgos Lanthimos (including on the upcoming “Poor Things”), and Joe Wright (she consulted on this season’s “Cyrano”). Chassay is also the visionary behind “Anna Karenina,” Hulu’s “The Great,” Netflix’s upcoming “Persuasion,” and Amazon Studios’ “The Electrical Life of Louis Wain.” For the latter, starring Benedict Cumberbatch as the titular cat-obsessed Victorian artist, Chassay says her collaboration with writer-director Will Sharpe exemplified the ideal relationship between filmmaker, CD, and actor.

What went into casting “The Electrical Life of Louis Wain”? Did it follow your typical casting process?

It was very exciting to work with Will Sharpe, because he is extremely bright. He thinks outside of the box, and he’s also a fantastic actor. He’s a huge detail man. We spent a lot of time talking about actors and looking at [historical] material. I think central to the process, particularly on this film, was figuring out the sisters, which is such a central element to Benedict’s character. This family was kind of taken hostage by his brilliance, but also his mental illness—and obviously, the gendered element of being women and needing him to earn the money. I think the linchpin in terms of the family—the sisters—was Andrea [Riseborough].

Did you think about this film’s biographical aspect when it came to matching actors to the real people?

Interestingly, the period element of this was never a dominating conversation. What drew us was the tragedy and misunderstanding of that brilliance and creative zeal and the mental illness aspect. [It was] a bit like “The Great”: When you’re working with brilliant stories, you’re just wanting to find vivid [actors] and explore the best kind of talent. The rest fits around it. When you’re casting a central role of a real person, you try and source any material that you can to get a sense of who [they were]. And sometimes you capture who that character is without needing them to physically look exactly like that person.

What is your casting process in general? Are there things you do for every project?

What I always do is just dive into everything that’s current and make sure that [I know about] what actors are doing. As creatives, everybody’s evolving all the time. Probably the most rewarding thing about casting and working with acting talent—outside of finding new talent and breaking out young people—is a career trajectory. Maybe they’re ready to evolve into something that they haven’t been perceived as. One of my things would definitely be always trying to see something that hasn’t been seen before, or inviting the opportunity to just play against type as much as one can, to challenge the way audiences see things.

Definitely. Often, you even have to have a little bit of a pushback. And then you’re like, Should I give this one up? Which one should I fight for? And then you try and present it in a different way. It’s an interesting dynamic.

Also, most commonly, casting directors have been women and directors [have been] men. So it’s got this nuance to it, where you have to do this sort of dance. At least, that is something that I’ve observed.

That’s an interesting note about directing being a male-dominated field and casting less so. Why do you think that’s a trend?

I think, traditionally, the casting directors were kind of like the producers’ secretaries at the studio. So it was a sort of secretarial assistant role, and therefore it never was sort of acknowledged from the outset as a head of department. That evolved over time, which is why I think [CDs are] the only heads of department that [are] still lagging, that don’t get awards recognition.

What do you consider to be the ideal relationship between director and casting director?

For me, if I’m working for somebody whose mind I’m interested in, there’s a sort of explorative [collaboration] where I can facilitate their vision. In that match, when you hit that beat and they respond to something that you’ve seen, that you feel, there’s a little bit of magic. You get a feeling that I would say is where the collaboration is. It’s about facilitating and helping somebody else to present stuff that might inspire them.

What should actors know about auditioning for you?

Just enjoy it and interpret it; put something down, and don’t obsess. We’re just interested in essence and energetics and where an actor can bring something to a character that maybe we haven’t even predicted that we’re looking for. It feels exciting.

What is your advice to actors for creating a well-executed self-tape?

Just keep things simple. Don’t overthink them. The only self-tapes we normally have to ask for again are when people get carried away with props; they can sometimes do a big number. And this is a boring thing to say, but [we need] a clear headshot so we can see the eyes. Have good light. It’s better to shoot it in the daytime near a window than with a lamp. I actually lived with an actor for a long time, and he said that the key to doing a good audition was not nailing it. It’s a funny thing to say, but it’s making sure that when you [finish an audition], the director [still has a job to do]. Don’t over-perfect your performance. Bring a performance that’s maybe got a sensibility that you’ve thought of, but just keep it open and lucid, because directors want to be able to say, “Oh, that’s interesting. Can we try this?”

Jack Smart
Jack Smart is the awards editor at Backstage, where he covers all things Emmy, SAG, Oscar, and Tony Awards. He also produces and hosts Backstage’s awards podcast “In the Envelope” and has interviewed some of the biggest stars of stage and screen.
END_OF_DOCUMENT_TOKEN_TO_BE_REPLACED