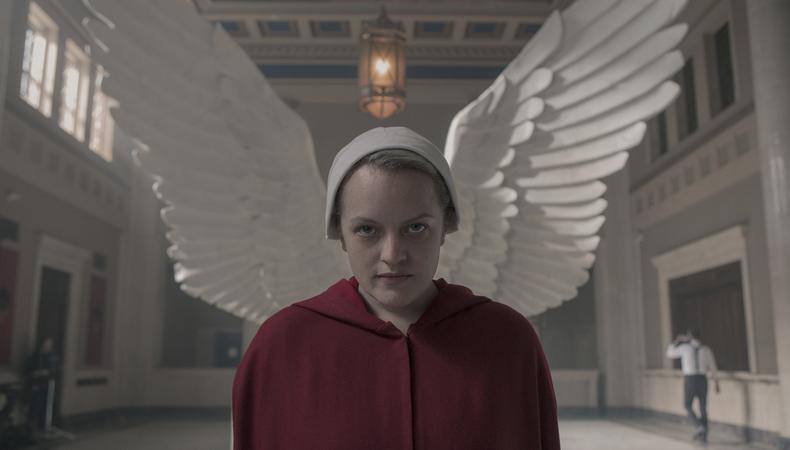 Though it’s become synonymous with brutality, Hulu’s “The Handmaid’s Tale” sure knows how to make the gruesome look gorgeous. That is in large part thanks to Emmy-winning cinematographer Colin Watkinson, who for three seasons has been intent on capturing the fictional society of Gilead with sweeping shots that are in stark contrast to the grimness of the forced-child-bearing regime. Watkinson is also the one responsible for those now-infamous Elisabeth Moss close-ups, putting the camera inches from the Emmy-winning star’s face and, as he describes it, doing “a little dance.” 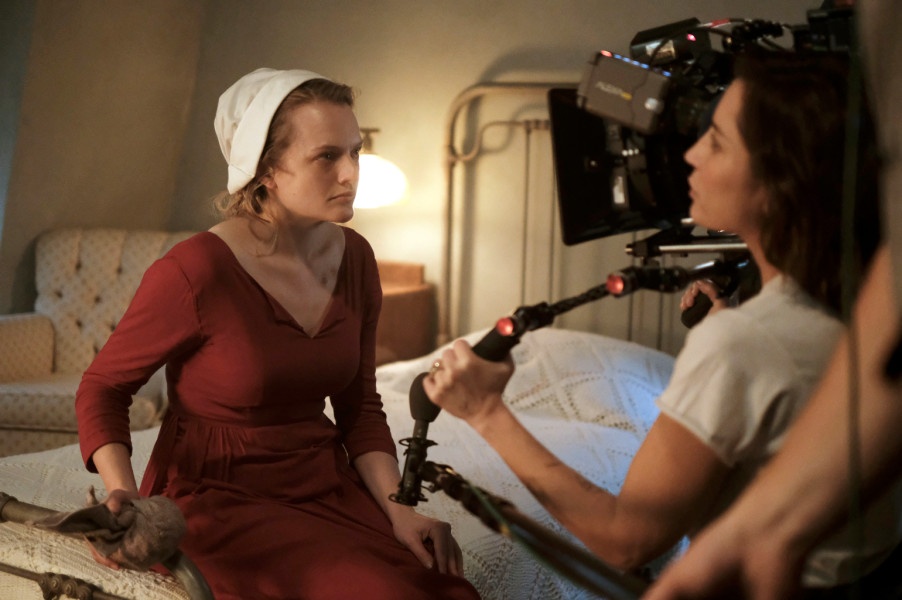 “Handmaid’s” depicts such grotesque acts, but it does so beautifully. Is that dichotomy intentional?
That’s how it started from the very first description by [director] Reed Morano about how she wanted to separate the worlds: The minute she started talking about Gilead being Cubism-esque, there’s a certain compositional style to that. Then, when I saw the costumes and the production design, it [became clear that] this is what Gilead is, as far as how we were going to compose it and how it looked. Gilead is very beautiful, but there’s this understanding that it’s a nasty, terrible regime. There’s something interesting in that. Not everybody sees Gilead as a nasty, terrible regime—all the commanders and the commanders’ wives don’t see it that way. Story-wise, it was a great technique, because when you went back to the “old world” or to Canada, you knew instantly where you were, and you weren’t in Gilead. Of all the terrible atrocities, the first one we had to do was the monthly ceremony, which, in the book and the script, it reads that the lights are on. It’s not moody-romantic. It’s this great juxtaposition to the reality of what is happening—it makes for an interesting story.

The imagery of the show is already iconic. How closely are you working with the production and costume designer?
[They’re] two incredibly powerful women, very strong-willed but great collaborators. [Costume designer] Ane Crabtree’s visual sense—you can get into very deep discussions very quickly with Ane. She loves to go deep into the reasons for the colors, and she became the “Gilead Bible.” She wouldn’t stop digging into the story and finding all this information. When we went to the colonies, Ane was very particular about what color she chose, and I had to kind of wait with bated breath to see what she’d come out with because that was going to determine the whole Colony look for me. And then, with [production designer] Julie Berghoff, our initial conversations were about how she does walls. She changed my life in terms of what I expect from just a simple wall covering. Her thought process in terms of texture, sheen, color, depth—it’s truly remarkable. Then it’s tying that in with the rest of the setting, the set decorations. So, that’s how I looked at it: Whatever these guys did, there was a reaction from me. 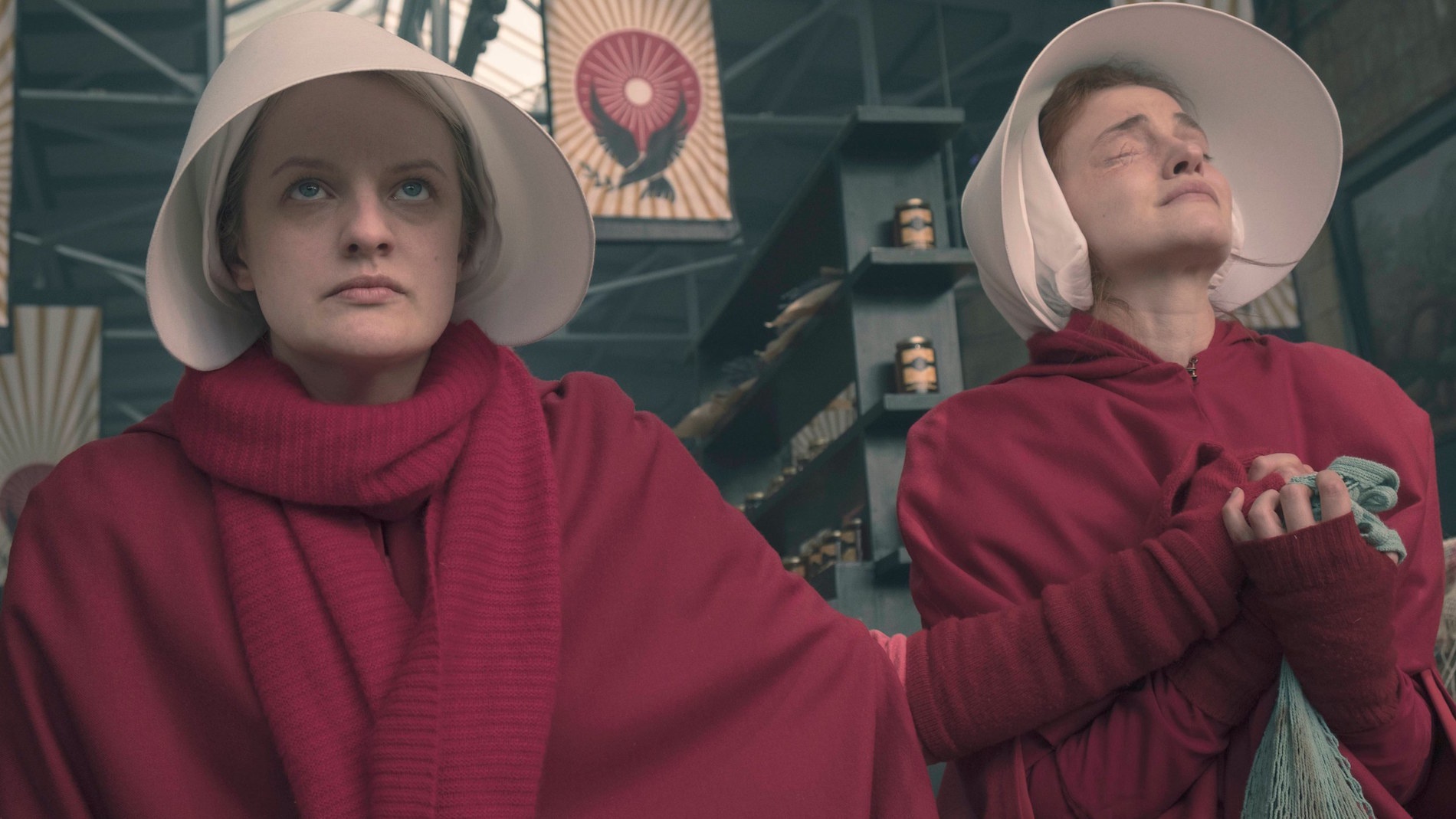 As much as the show is known for sweeping landscape shots, it is as well-known for close-ups, especially of Elisabeth Moss. What is the process for executing those?
Those close shots where we’re inches from Elisabeth’s face? Luckily, she’s totally OK with it, because it’s unnerving. Another thing I’ve learned from “The Handmaid’s Tale,” watching Reed, [how] she likes to operate [when she’s directing], she’s gonna be the DP herself. So I watched how she did it, what she did, and it was interesting, there was talking going on while they were shooting. I said, “Wow, I’ve never seen that before,” because you’d think you’ll need your actors to get into the role and can’t disturb them. But this worked, and Elisabeth has this amazing ability to be able to do that. She can act completely believably, with an incredible amount of emotion, and take direction on the fly. It makes it so when you’re very close, it isn’t all left up to “Well, I hope she does that.” It becomes a little dance, and the camera can’t lead the way; the actor leads the way. But you know as the operator that you can guide Elisabeth into doing something that would make it visually interesting and make the shot a bit more intense.

And how do you actually “guide” the actor?
We’ll talk about the shot beforehand. Sometimes [I say], “We’re doing this shot. Is that OK?” So we all know what it is. We set up for it and we just do it. Then, other times, it’s like, “This shot, it’s a little bit different,” so we all have a talk about it, try it out, and then if it’s not working, it’s a discussion with the director about what’s not working, and then we’ll work it out. We’re trying to find the moment. The most amazing thing about Elisabeth is that she can reproduce that moment again and again and again and again. When you’re trying to do something with a moment and really sort of drag the moment out, it’s really enjoyable to do with Elisabeth. You don’t feel like you’re just trying to capture it; you are creating it together.

When you are shooting those scenes, is there usually a feeling of “We got it”?
Oh, yeah, you feel it. The camera goes down and you don’t have to say anything, she knows it. I don’t know how she could tell when the camera is inches from her face, but I guess she knows what she’s done. She’s also seeing how the camera reacts, and we both know when it was right. She did her thing and the camera moved at the right time, she knew that I did the right thing and I knew I did the right thing, and we were both very happy.

In a general sense, what kinds of actors make you most excited to shoot?
I feel incredibly lucky on these last couple of shows [I’ve done], where I’ve worked with people like Elisabeth, Yvonne [Strahovski], Joe [Fiennes], Ann Dowd, and then working with Octavia Spencer and Aaron Paul [on “Truth Be Told”]. These people walk in and just create magic in front of you. When you see it on their level, you wonder, Why can’t everyone do it like this? And why are there 450 shows to watch and only 10 of them are worth watching for the believability? Everyone else is trying—and I hope I’m not being too harsh. It’s hard, but they do it. I really respect it, because it’s almost otherworldly, turning into another character and then having someone who’s watching believe it and not even question it. Some actors hit their marks—like, Elisabeth will hit her mark within a quarter of an inch—and other actors not so much, but I don’t mind that. They all bring different energies. You have to try and tap into what it is. Even if someone isn’t particularly pleasant, they’re there for a reason and it’s my job to find it and make it work.

Is the same true of your relationship with directors, since they change from episode to episode?
Yes, the cinematographer’s collaboration with the director will change every time. Every director has different demands, different ways of working. For me, it’s a case of trying to find the situation with that director that works, so that we can do the job together properly. The cinematographer is there to tell the story with the director in the visual sense. The producers are very careful about the type of directors they bring into “Handmaid’s,” very strong storytellers, and “Handmaid’s” has a very strong visual sense. I am there to help take them on the journey they want to go on.

Do you have any advice for aspiring cinematographers?
It’s a piece of advice I stole from [“A Star Is Born” cinematographer] Matthew Libatique, because I think it’s one of the best pieces of advice I’ve ever heard. He just said, “Just keep shooting. You have to just shoot. The more you shoot, the more experience you get, the better you get at it. So, keep shooting.” When you’re first starting, don’t be so precious about what it is. Don’t be worried about it; just enjoy the process and keep doing it.

Casey Mink
Casey Mink is the senior staff writer at Backstage. When she's not writing about television, film, or theater, she is definitely somewhere watching it.
END_OF_DOCUMENT_TOKEN_TO_BE_REPLACED