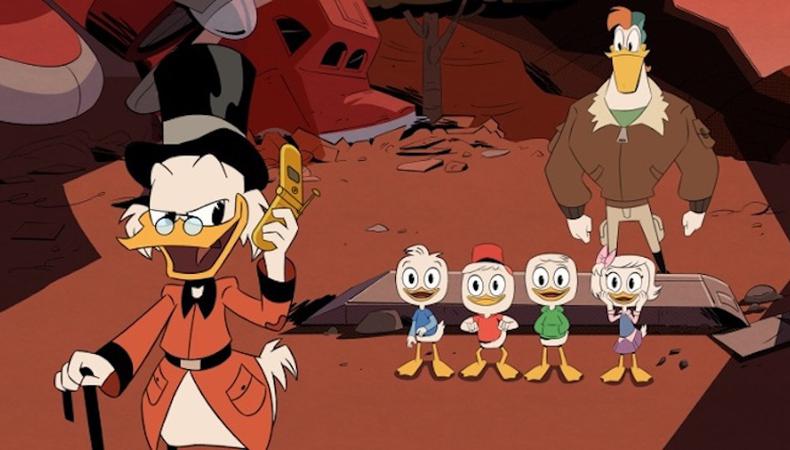 Aaron Drown, executive director of Disney Television Animation Casting (“probably the busiest animation production house in L.A."), reveals how he cast the new “DuckTales" revival and why voice actors need to know how to read between the lines.

He likes building actors from the ground up.
“The coolest part about my job is when I’m able to find an actor and give them their first job in animation—finding an actor at an improv show who I think would be good at this and then introducing them to animation and working with them and auditioning them until they finally land a role. That makes me happy, helping people out; on the other end of things, the creative team, executive producers, writers, whoever is the head of the project, also really helping them inform their characters by providing an actor who really is the character. We get in on the ground floor in the development process. Things are very fluid at that time and they have characters that they need to flesh out, and an actor can really help with that—not that they’re thinking an actor can really help with that, but I know an actor can help with that."

Voice actors need to push their boundaries.
“You’re reading against 500 actors for the same part, so you want to experiment with your instincts. Is your first instinct the same instinct that all 500 people are going to have for that line? If that’s the case, then you want to go with something different. I will say this: The [actors] who work in animation five days a week, four jobs a day, they make very interesting choices."

Look to animated classics for inspiration.
“Go back and think about iconic animated characters. If you were to try to do an impersonation of what SpongeBob sounds like when he laughs, or what Mickey Mouse sounds like when he laughs, just realize, ‘Oh, an actor came up with that laugh. An actor came up with that noise.’ But don’t expect in the sides for the writer to write, ‘Laugh.’ Just be aware of what’s happening around the lines and inform them. The things that aren’t just the written word are important to think about when you’re auditioning for animated characters because that’s really how you make an animated character come to life."

Going from screen acting to voice acting?
“What I tell actors when I’m teaching classes or I’m coaching is all those weapons that you have to emote when you’re on camera or you’re on stage—meaning your body language, your body, your facial expressions, all those nonverbal things that you do—you still have to find a way to get those things through the mic. The voice actor has to figure out what a shoulder shrug sounds like, what an eye-roll sounds like; they have to pay attention to blocking or where the character is that they’re speaking to, what kind of a choice the actor has to make because the character is farther away or closer up. If you watch animation from a student perspective and just pay attention to all of the sounds that you’re hearing versus the words, there’s a ton of physicality. So I think that’s the thing that actors who haven’t done animation have to understand and learn to get themselves up to the [right] level."

Voice actors should get experience wherever they can.
“The more experience [actors] can get on a microphone the better. Obviously, like with any other acting, classes are great. There are [also] a lot of talented animators out there making college films, making shorts, looking for people online to help them with voices and stuff. And you don’t have to be an animation nerd, but you do have to watch animation and just pay attention. Think about the actors being alone in a booth and that’s how they’re coming up with those performances and being able to kind of do that. Obviously improv is [also] becoming very important in the world of animation, so any kind of acting training is good, but I would stress getting on a microphone with earphones, listening to yourself over and over and over—that’s probably the most important thing."

Improv was especially important for ‘DuckTales.’
“Specifically with the ‘DuckTales’ cast, you have some very talented comedic actors who can be very funny regardless of help from writers or not. They can improvise. I think that was really important in that cast. We got lucky in terms of how many people wanted to be involved in ‘DuckTales’ just because of the nostalgia factor and so forth, so I think Danny [Pudi], Ben [Schwartz], and Bobby [Moynihan] were probably big fans of the original cartoon."

Keep giving great auditions, and your time will come.
“Don’t get so hung up on the role that you’re rooting for. I think the fear in committing strong choices is like, ‘Oh, is this what they want or is this not what they want? And if it’s not what they want, maybe I won’t go for it.’ My point is, you’re reading for more than the role that you’re actually auditioning for. The people that do what I do, there’s not that many of us. There’s not hundreds of people casting animation. There are 12 to 16 people in L.A. that do what I do or do what my team does. So the people listening to your audition for an animated character are going to be casting something else very soon, casting many characters very soon, and if you have a strong audition, even if it’s wrong for this character but it’s a great audition and you made great choices and you did great things, then I’m going to remember that, and if it’s right for another character that I’m casting, then I’m going to call that person in or I’m going to make sure that that person reaches that character. The actor doesn’t have to get lost in, ‘Hey, here’s the exact role that I’m auditioning for. Am I doing it right?’ Just make it funny, make it a character, and eventually someone’s going to notice."

Want to get started in voice acting? Check out Backstage’s voiceover audition listings!

Benjamin Lindsay
Benjamin Lindsay is managing editor at Backstage, where if you’re reading it in our magazine, he’s written or edited it first. He’s also producer and host of a number of our digital interview series, including our inaugural on-camera segment, Backstage Live.
END_OF_DOCUMENT_TOKEN_TO_BE_REPLACED