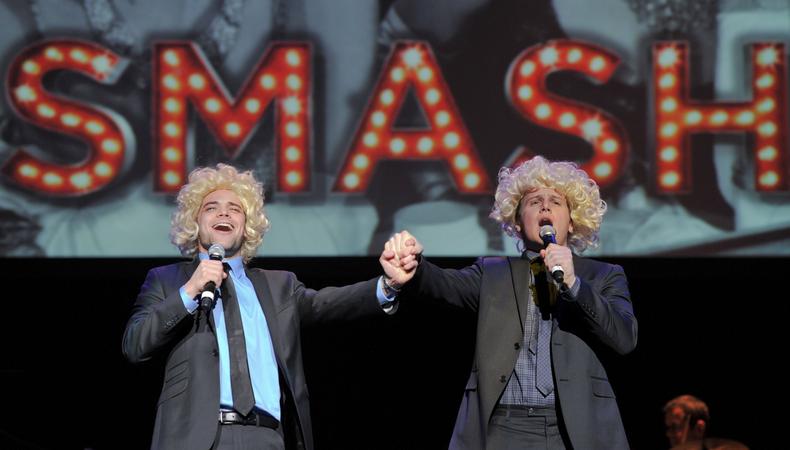 Even the best of the best have unrequited performing dreams, oftentimes because they're the wrong type—or gender—for the parts they want to play.

At the annual MISCAST Gala for MCC Theater on Monday night, we asked Christian Borle, Jeremy Jordan, Jonathan Groff, Krysta Rodriguez, and Victor Garber to share their impossible dream roles, some great advice, and the talents they wish they had.

Christian Borle, "Smash" and "Peter and the Starcatcher"

If you could play any role in any show, what would it be?
I'd say Mrs. Lovett. I don't think I'd ever actually get cast as Mrs. Lovett. I feel like I could do her justice. I'd just like a wig with little cinnamon buns on it.

What's a talent you wish you had as an actor?
Right now, it would be really helpful if I could actually play the piano. So that's one. And I'd like to be a better dancer. I see some of these athletic dancers today and I cannot believe what they're capable of. I don't bend that way.

If you could play any role in any show, what would it be?
Mama Rose. Why not? It's consistently the most ambitious role in the theater, always most rewarding. So why not?

Do you have any audition horror stories?
I've been lucky enough not to have any crazy horrible audition stories. I've definitely been over my head in some aspects, especially in terms of dancing. I've fallen on my face in my dance calls.

What's a talent you wish you had as an actor?
I wish I was a better dancer.

If you could play any role in any show, what would it be?
I think it would be Millie in "Thoroughly Modern Millie." I saw it six times. I'm obsessed with Sutton Foster, and basically, I already know it so I could do it without much rehearsal.

Who would be your Jimmy?
Sutton Foster.

If you could play any role in any show, what would it be?
I want to do any role in "Once on This Island," which I would never be able to do. I want to sing "Part of the Human Heart." Or I want to play Annie. Or I want to be the Emcee in "Cabaret."

What's a talent you wish you had as an actor?
I wish I could play an instrument. I fake play the piano on "Smash" and it's really a rewarding experience because I've never been able to play and it looks so much like I'm doing it. When I was younger, I took lessons and I gave up because I wanted to play a song right away. I was not patient enough for it. And now, I wish I had stuck with it.

If you could play any role in any show, what would it be?
"Gypsy." It's one of the great musicals of all time. I've had a secret yearning to play that role, but I don't think it's going to happen. I sort of feel like I'm auditioning tonight. By the way, everything's an audition. Just so you know. No matter what you do, it's an audition.

What advice do you have for aspiring actors?
There's nothing more boring than advice from older actors to younger actors. I'm always amazed by how young actors believe that they aren't enough. The best thing a young actor can do is to learn to trust who they are.

What's a talent you wish you had as an actor?
Even though I'm a singer, I wish it came more easily to me. I wish I could dance. I have danced but I'm not a dancer. And I also wish I could write. So that's sad, isn't it?