The Second Act of Gillian Anderson 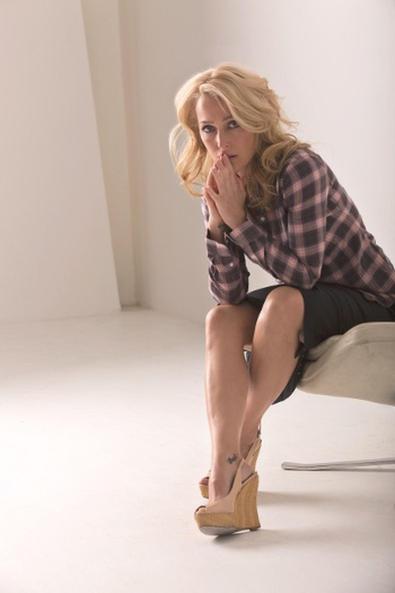 The photo assistant is a fan of “The X-Files.” The whole room is. But the photo assistant is the first to speak up. “Would you mind…” he says, apologetically holding up a camera. Gillian Anderson obliges, posing genteelly. That’s when the floodgates break open. A single-file line forms for selfies with Scully.

Of course, Anderson is no longer Dr. Dana Scully, not by a long shot. In fact, Anderson has led a fruitful career since the end of the beloved conspiracy show. Currently, Anderson is hostile CEO Meg Fitch on NBC’s action-packed hostage mystery “Crisis”; the emotionally detached Detective Superintendent Stella Gibson on BBC Two’s serial killer thriller “The Fall”; and sly psychiatrist Dr. Bedelia du Maurier on “Hannibal,” also on NBC. In each of these roles—apart from any of the shows’ subject matter—Anderson possesses the same intuitive gravitas that thrust her into the spotlight as one of the first adult female leads in action TV, a fact that now barely seems worth mentioning, given the spate of such roles today.

It’s just that she’s now 45 instead of in her early 30s. “There’s a trend starting about eight years ago of women of a certain age leading a strong cast,” Anderson says, reclining on a lounge in the photo studio in northeast Los Angeles, having fulfilled her selfie quota. “You have it in ‘The Big C,’ ‘Scandal,’ ‘The Good Wife,’ ‘Damages.’ [Roles for women my age are] still lacking in film scripts, which is why many women are turning toward working in TV.”

Television has suited Anderson well in the years since “The X-Files”— just not in America. After decamping to the U.K. shortly after the Fox series ended to make her West End debut, Anderson found the artistic environment too welcoming to leave. “One of the reasons I moved to the U.K. was because, as a working actor, transitioning between the stage, television, and film is easier; Judi Dench has been doing it for decades now,” explains Anderson. “I was following my heart with the kind of work that I wanted to do.”

Her time in London led to multiple critically acclaimed performances, from the feature film “The House of Mirth” and her Emmy-nominated turn on BBC’s “Bleak House” to a revival of “A Doll’s House.” Her work on American screens—save her reprise of Scully for 2008’s “X-Files: I Want to Believe”—was much sparser, until her heralded return last spring as the psychiatrist to Mads Mikkelsen’s titular serial killer on “Hannibal.” With “Crisis,” however, Anderson officially steps back into the shoes of a series lead. 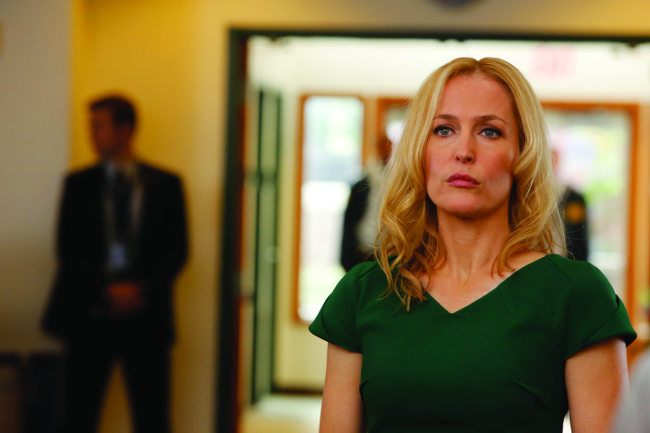 The no-nonsense CEO of a multinational IT conglomerate, Anderson’s Meg Fitch is used to being the boss—until her 16-year-old daughter is kidnapped with the rest of her high school class (including the president’s son) on a school trip. “A lot of what the show starts to be about, and may continue to be about, is how powerful parents deal with the disappearance of their children, and what lengths will they go to to get them back again,” says Anderson of the show’s premise. Sitting across from her, it takes no stretch of the imagination to see why the producers sought her out. Anderson’s arctic eyes pierce through television screens, and they’re even more authoritative in person.

Signing on for “Crisis” wasn’t a hard choice; Anderson calls the pilot’s script “a complete page-turner. I couldn’t put it down; I gave it to my daughter, and she couldn’t put it down.” After discussions about living in London and filming in Chicago with series creator Rand Ravich and executive producer Far Shariat led to both adamantly saying the logistics were doable, Anderson was sold.

Leading the ensemble cast of “Crisis”—which also stars Lance Gross, Dermot Mulroney, and Rachael Taylor—opens up a new set of questions for Anderson. “On ‘Crisis,’ I’m popping in and out [of the show],” she says. “I’ve never really done that before. On ‘Hannibal,’ it’s a very secluded world that my character is in, whereas on ‘Crisis,’ she’s one of the players. So the impact of the work that I do has a trajectory and reverberations, but I have no idea what those reverberations are. I’m guessing as to what the balance is, so it’s a unique experience. We’ll see where ‘Crisis’ goes.”

Her ambivalence about her character doesn’t shine through onscreen, of course. She’s assured as ever. When an FBI agent can’t shush a room full of rabbling, affluent parents, Fitch simply holds up her hand and the room quiets. Silent power is a recurring trait for Anderson’s roles. “That can add to the complexity of the character,” she says. “Silences and pauses are sometimes more meaningful and more powerful than words can be. In ‘The Fall,’ there’s actually not a lot of dialogue in some scenes. I find it more interesting. You can put the work to the depths of what’s really going on for the character.”

“The Fall” pits Anderson, as another quietly powerful woman, Detective Stella Gibson, against a sexually deviant serial killer played by Jamie Dornan (the recently announced star of “Fifty Shades of Grey”). The series is a deliberate, simmering modern psychodrama that bears little resemblance to the flashy “Crisis.” “There is a difference in the temperament, and in the style of acting,” says Anderson. “Obviously, ‘The Fall’ is quieter and slower, and there must be a transition that happens in playing that and the rhythm of that than the crisp, more American [style of ‘Crisis’].” 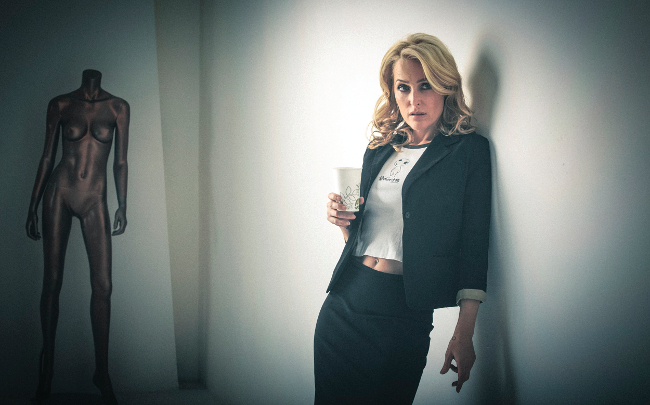 Despite her full slate, Anderson keeps busy away from acting. She recently announced “A Vision of Fire,” the first book in a co-authored science fiction series with writer Jeff Rovin, who approached Anderson with the idea, as well as narration for the Emma Thompson–produced film “Sold,” about the child slavery and sex trade industry. “I’ve got so much to say about that,” she says. “Hopefully [the film’s] presence will shine a light on the situation, because the sale of children is becoming the No. 1 industry in the world.”

Between those projects and her three promising shows, Anderson is mounting a major tactical offensive on American audiences and preconceptions about mature women in general. “I feel like I’m just starting to touch on what I really want to be doing,” she says, leaning forward in her chair. Her voice, which is both gentle and stern, has swooped into a whisper. “My dream would be to do it all: to be able to do films and theater and write and to continue to do these projects. And to be able to balance my responsibilities as a parent, which seems to be working out OK right now.”

Whether that translates into a relaunched career in America remains to be seen, but in this age when the female role has expanded beyond archetypes, it would be sheer foolishness not to bet on the woman who led the charge all those years ago.