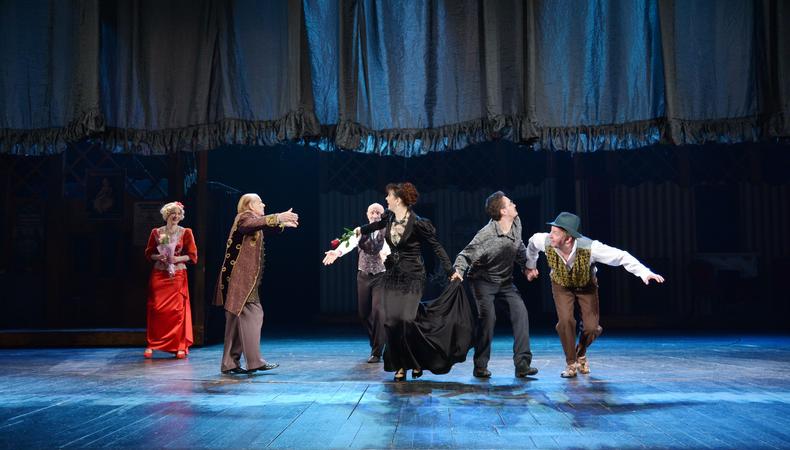 If you’ve ever been told, “Not my left—stage left!” by a director, then you know the challenges of translating stage directions. These instructions provide necessary information about how actors should move onstage; but figuring out how best to follow them—and not literally break a leg—can be daunting. Performance, practice, adaptability, and commitment to storytelling are key to properly tracking stage directions.

What are stage directions? 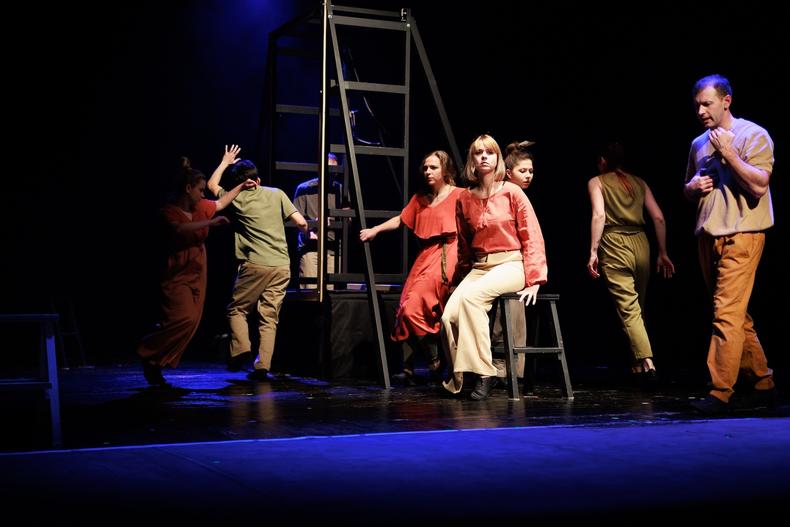 Stage directions provide instructions for the technical aspects of a play. They describe characters’ appearances, movements onstage, and the setting.

Stage directions guide actors’ movements: when and where to stand, sit, pace, enter, exit, dance, or carouse—otherwise known as blocking. They also establish a play’s mood and tone through descriptions of costumes, lighting, and sound.

Action and movement: The primary purpose of stage directions is to describe what a character is doing—plus how and where they are doing it—between lines of dialogue. Action lines can be simple, like, “He picks up the phone” or, “She gazes out the window.” They can also be complex, as in this passage from Paula Vogel’s “How I Learned to Drive”:

“(Waiting patiently, with a smile on his face, Peck sits sniffing the night air. Li’l Bit climbs in beside him, seventeen years old and tense. Throughout the following, the two sit facing directly front. They do not touch. Their bodies remain passive. Only their facial expressions emote.)”

Or, if you’re William Shakespeare, your stage directions can be simple and complex at the same time—including what is perhaps the most famous direction of all time: “Exit, pursued by a bear” from “The Winter’s Tale.”

Costumes: Stage directions may also explain what a character looks like. Whether they’re wearing a half-mask like the Phantom in “The Phantom of the Opera” or have an authoritarian appearance like Prospero in “The Tempest,” stage directions can provide vital information about costuming and character.

Lighting, sound, and setting: These elements establish the physical and aural details of a scene. This gives the director a way to visualize what’s onstage and the writer a chance to get the intended mood across. It’s also vital for actors to understand the objects, sights, and sounds around you can help make your performance feel natural.

For example, here are the very first words of Arthur Miller’s “Death of a Salesman”: “A melody is heard, played upon a flute. It is small and fine, telling of grass and trees and the horizon.”

Emotion: Stage directions can direct the intention of a line reading—especially if a character isn’t saying what they actually mean. These directions are usually written in parentheses just before dialogue. For example, in “Shadow Play” by Noël Coward, Martha takes a stern tone when asking Vicky about her feelings about Simon and Sibyl:

Martha: How much do you mind?

She takes the dressing-gown off the bed and goes into the bathroom, leaving the door open.

Martha: (firmly) About Simon and Sibyl.

How to read and understand stage directions

Bigger-picture stage directions that describe setting, character, or action are written in paragraph form between dialogue—these sections are also called your “action lines.” A stage direction intended to describe your line delivery will be placed in italics either next to or underneath your character’s name in the center of the page. 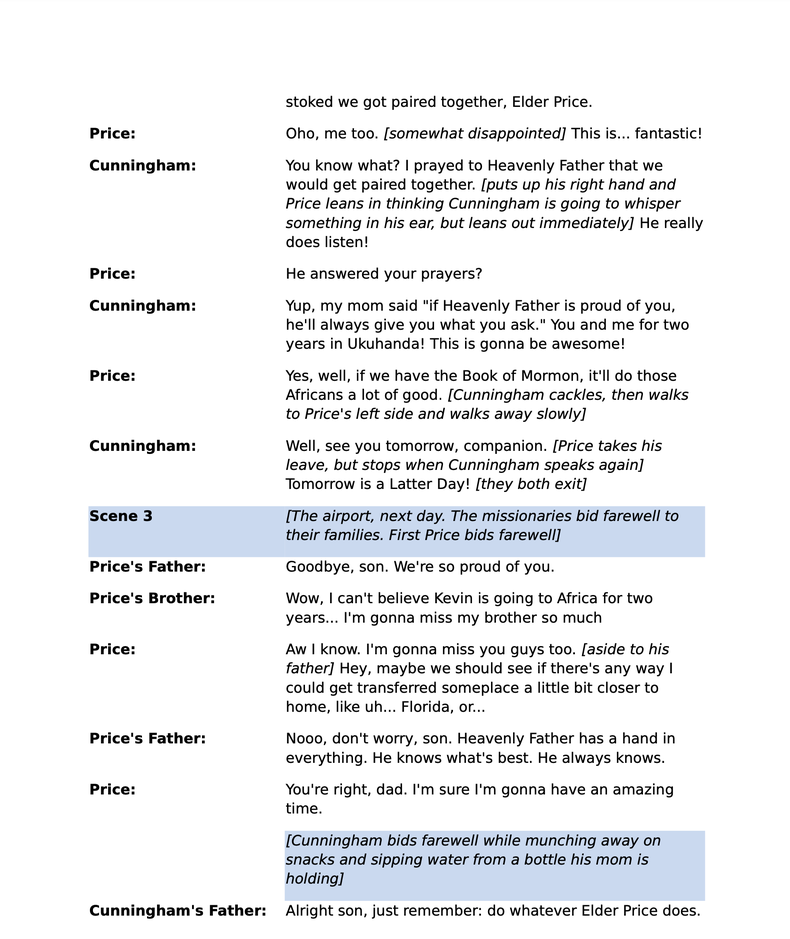 If a stage direction is literally directing you as to which way you should move, picture yourself center stage facing the audience. From that position, “stage left” is your left and “stage right” is your right; moving away from the audience is “upstage” and moving toward the audience is “downstage.”

These three sections (center stage, upstage, and downstage) are themselves divided into several sections—three or five, depending on how large the space is. Each of these sections has its own left, center, and right zones. 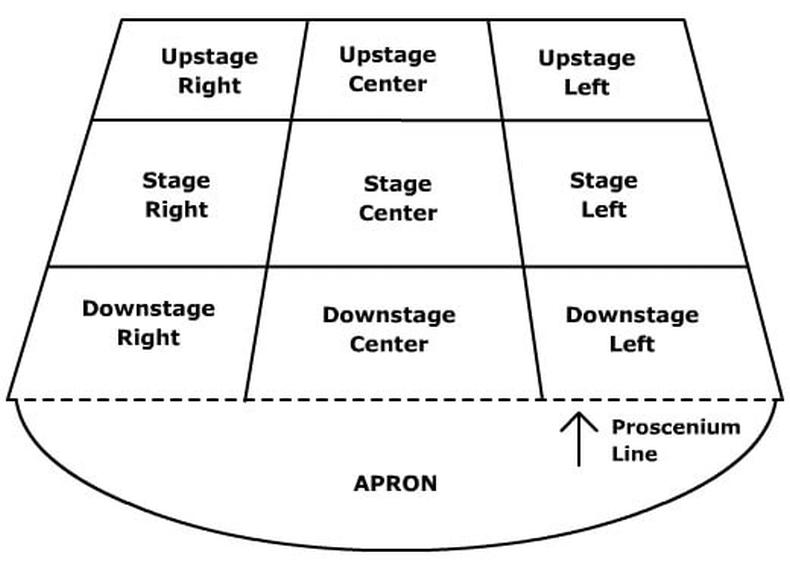 To indicate all of these various sections, stage plays often use the following abbreviations:

While stage directions don’t always contain these abbreviations, they can be used by the director to guide actors’ movements onstage. If your character has to move away from the audience and into a corner, the stage directions might just say, “Walk UL.” 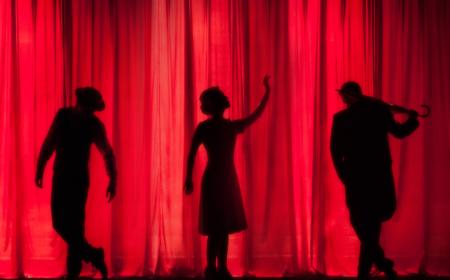 3 Major Differences Between Stage + Screen Acting
↑ Back to top 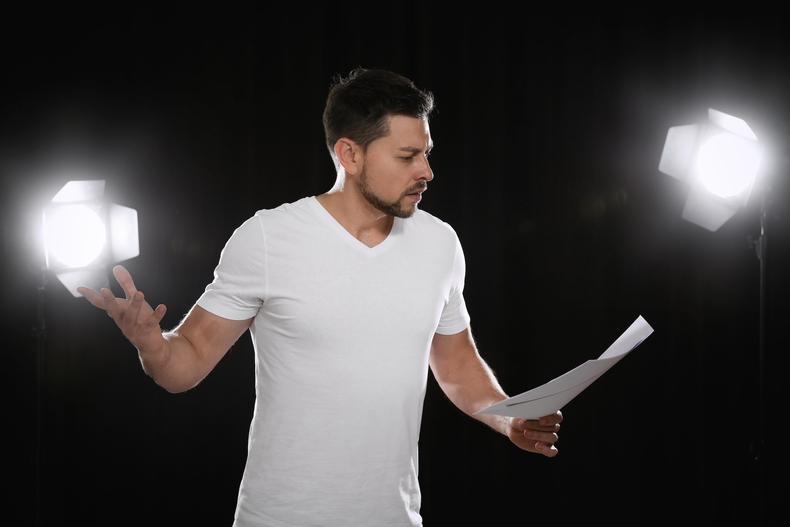 Memorizing your lines and trying to comprehend stage directions at the same time can be a feat. These tips can help you not trip over your own feet.

“The most powerful part of the stage, the place where you put the most important scenes, is downstage center,” says theater director Catherine LaMoreaux. This means that if you know what your biggest scene is, you likely also know where on the stage it will take place.