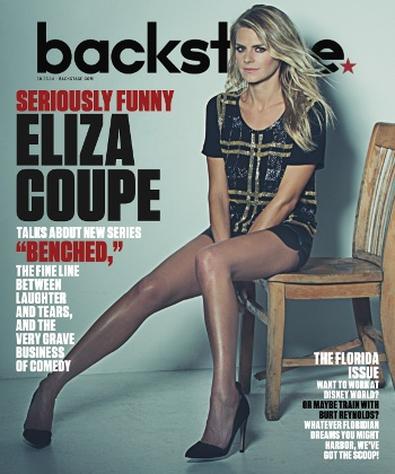 When Eliza Coupe first read the script for USA’s new half-hour comedy “Benched” (premiering Oct. 28), she didn’t know that co-creators Damon Jones and Michaela Watkins had originally intended the show for Watkins. But when appearing on ABC’s “Trophy Wife” made it impossible for Watkins to play corporate lawyer Nina (who reacts so badly to being passed over for a promotion that the only job she can get is at a public defender’s office), Coupe came in and nailed the role. We asked Watkins to interview Coupe about the show, making Nina her own, and the fine line between comedy and drama.

Michaela Watkins: I just want to ask you some questions I think I probably know the answer to, but I always find that when you know that someone else might be listening, sometimes you hear something different. So what made you decide to do this job? Because you were at a point in your career where you really had the pick of the litter.

Eliza Coupe: There were a lot of things I actually passed on. I wanted something that there was going to be so much meat to sink into and just devour. I didn’t know what that looked like, but I knew that’s what I wanted. And then “Benched” came along and I thought, Oh, this is a fun world to jump into! Just reading it on the page, you could tell this was a special place.

MW: I can’t believe how much you embody the way that Damon and I saw the character. We were pitched a lot of names and when we came across your name it was like, “Oh, that’s her.” To the point where it’s [you] before I would even say it’s me. It’s who we wanted me to eventually be. Having that knowledge stepping into the show, was that ever an issue? 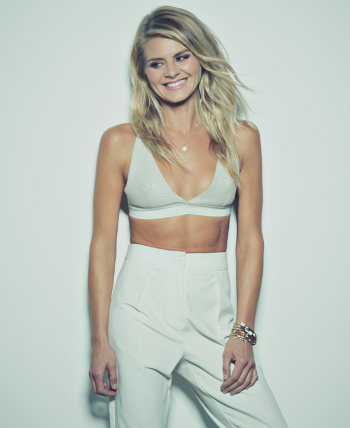 EC: First of all, everything you said gave me chills through my entire body. That’s just crazy to me. But I’ll take it! I didn’t know until a little later in the process of doing this that this was a vehicle for you. [And then] I just thought, Wow, that’s what a real, true artist does. There could be weird energy there but I felt nothing but absolute support. And I was like, “I’m not gonna let this fucking girl down!”

MW: I love that if I ever write a pilot for an old black man, I can be like, “I wrote this for myself.” And then I’ll get the best performance out of Sam Jackson. But that is so incredibly sweet of you! Why do I go to therapy? I should just call you! But you have this show and you’re the center of the wheel and now we have to find the spokes. Being on the other side of the auditioning table, was that a first for you?

EC: I think I’d done that once before, for a pilot. But this is so different because this is so big. I’m this woman, I am Nina, and I found myself getting more nervous. Because also, you guys hadn’t heard me even do the part. So I was like, “Oh God, they’re going to change their mind!” I know that I made jokes about sweating in the room. Half of that was it was very warm out, and then half of it was, “Oh my God, they will take this away from me if I don’t get it right.” But I learned so much from that. When you get to the point where we are—and I’m so grateful for this—everyone’s really fucking good. It’s not a matter of whether you’re good or not but if you’re right for the part. And there were some brilliant guys who came in, and there were some I was like, “It has to be him!” but then something else didn’t click. But I’m so thankful because I’ve gone on auditions since, and I’m like, “Well, if they want my version, then great. But if not, I’m not going to go jump off my building.”

MW: I talked earlier about bringing your own thing to it, but you’re a wicked good improviser. Incredibly quick. And of course everything is scripted, but some of the really delicious stuff we find in the edit is when you think the camera’s stopped rolling. It’s lines just off-the-charts better than anything we could have written. At what point in your career did you think you could take that room for yourself?

EC: That’s so funny you say that because the comfort I have shooting “Benched” is something I’ve never had before. I felt like I went to comedy school when I was on “Scrubs” and then with “Happy Endings” and this other show with Lily Tomlin. I knew I must be doing something right, but I never truly had the confidence to say something after the scene was over. But when I was working on “Happy Endings,” Damon Wayans Jr. said to me something his father told him: “If you’re thinking it, say it. If you have a joke or an improv, just do it because you’re going to regret it if you don’t.” And that is not a direct quote! One of the Wayans said that, I don’t know who. There are a lot of them!

MW: I feel like our comedy is born out of the same place. When we meet Nina, she has just upended her life in such a big way and we meet her at her pseudo–rock bottom. But one of the things you share with your character is this little voice inside that pushes you to go forward. Can you speak about that? Do you find that there’s a little quiet voice inside you that tells you to do things?

EC: Absolutely! I feel like there’s something inside of me and I get pushed forward to do things and half the time I end up on the other side of them thinking, Wow, that was awesome! How did I end up doing that? Basically what I’m saying is I have a split personality.

MW: Did you notice that there’s a sense that you set the tone for the set? Because the person who’s No. 1 on the call sheet has to hold that leadership position. 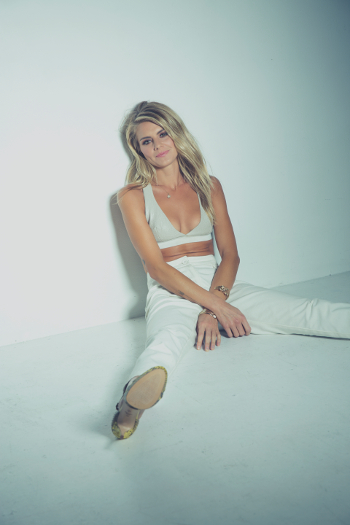 EC: I definitely felt it, but I thrive on that. I love being able to get everyone excited. Because I want to be in an environment where everyone is having the best time possible. That’s going to make a great product and it’s going to make the day really fun. That’s why I did plays when I was younger; everyone’s so excited to do plays in high school and college because you’re like, “This is so fun, we’re creating something!” And I found that on some of the other shows I’ve been on, I hear so much complaining. Now look, I’ve never been No. 1 on the call sheet, so when I got that workload I was like, “Holy shit, I get why people can be overwhelmed.” And of course I have days that are very trying.

MW: Maybe when we were making the show for $40 and a handful of delicious macadamia nuts and had to shoot two episodes in eight days?

EC: No! No. It was definitely my period. [Laughs] But I want a fun set, and I’ve been on sets where it’s not. And my boyfriend, whom I love more than anything on the planet, said the funniest thing to me: “You can light up a room, and you can also peel the paint off a room.” He said it so sweetly, but he’s right! We have that power as actors. We can switch the energy in the room for good or for bad. I just choose to use it for good.

MW: What else should we talk about? Oh, let’s talk about [Nina’s co-worker and verbal sparring partner] Phil!

EC: First of all, Jay Harrington [who plays Phil] is amazing. He’s amazing! And I absolutely love acting with him. We have so much fun together and his character is so fun. I love the dynamic between Nina and Phil. I love that they kinda can’t stand each other but they love each other.

MW: He’s such a serious actor. He’s way more Method than we are.

EC: He will be looking straight at me, going over his lines, and he does not want me to respond—it’s just for him and his eyes just happen to land on me. And I’m like, “What’s going on? What’s happening?” And he’s too nice to ever say, “Shut the fuck up,” but he’s just trying to go over his lines and I’m just sitting there doodling dick pics.

MW: That would be a great gallery show, on-set doodles.

EC: Oh, we will have to have a conference because we are doing a coffee table book of that, you and I, and then a gallery show. I know some people!

MW: That’s all the time I get with you, so is there anything else you want to say?

EC: I mean this in all sincerity: I’m honored to play this part. I’ve never been more proud of anything I’ve done. And I am so critical of myself, and as an actor that comes with the territory, but I don’t know if I’ve ever said I’m proud of anything I’ve done. From tip to tail, the entire project, I’ve never been more proud and can’t wait for people to see it!

MW: And I just will say this show would not be nearly what it is without you; you are stunning. And I don’t mean just physically, which you are, but your work is stunningly on point and I just want to watch you do anything and everything for always and forever. I’m your biggest fan! 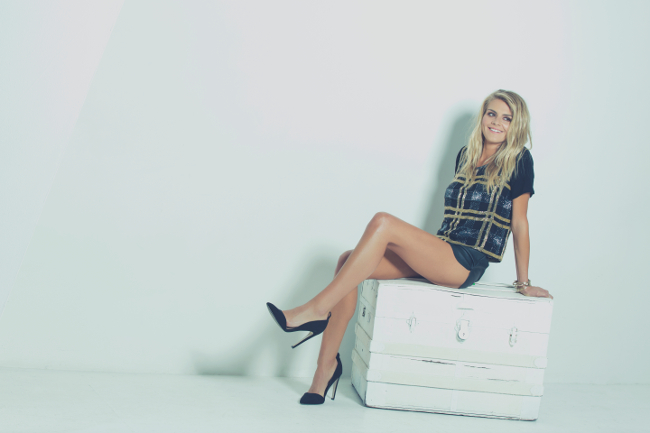