Composer Jeanine Tesori on the 100 Musicals of ‘Fun Home’ 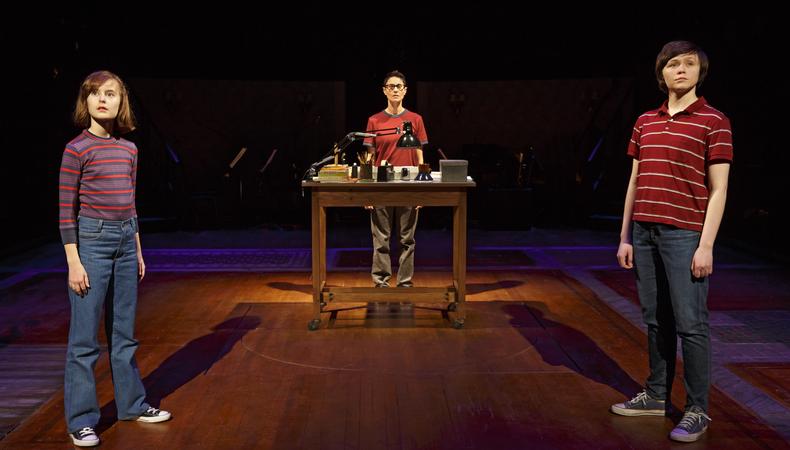 Alison Bechdel’s graphic novel “Fun Home” is like a brilliant piece of classical music: Each time you revisit it, you learn more about yourself. At least, that’s how Jeanine Tesori approached the memoir. “I’m a huge Stravinsky fan, and every time I listen to one of those pieces I think, I never heard that before,” says the classically trained composer. “That’s what that book is for me.”

Making such layered source material resonate onstage, then, presents as much of a challenge as it does inspiration. Tesori and book writer Lisa Kron have been fine-tuning their musical adaptation of Bechdel’s dramedy since 2009, continually revisiting its complex portrayal of family dysfunction, sexual identity, and loss. Their hard work has paid off; “Fun Home”—dubbed the first-ever mainstream musical centering on a young lesbian—was a finalist for the Pulitzer Prize after an acclaimed run at the Public Theater in 2013, and is now captivating Broadway audiences at Circle in the Square Theatre.

As Tesori points out, “A graphic novel is a hundred musicals. Sometimes one frame has a beginning, middle, and end.” Rather than theatricalizing those frames directly, the creators used Bechdel’s memoir as a guide. “We’re not doing the book; we’re doing her life. Her impulse to make the book is our impulse to make the show.” Most of the development process, Tesori adds, was an exercise in editing; whole storylines, musical moments, and versions of the show have ended up on the cutting room floor.

Kron’s book and lyrics underwent a similar evolution. “I could fiddle with dialogue endlessly,” she confesses. “It’s never perfect.” For her, the challenge became the little block of text above each frame, the disembodied voice of Bechdel herself narrating her childhood memories. “You sense that there’s an aching person behind it but it’s not a theatrical character because it doesn’t change. She knows everything.” How do you motivate a narrator who won’t discover anything new in her story? “That was the great journey of making the piece.”

The solution—splitting Alison into three characters at three different phases of her life—enabled Kron to create a dynamic relationship between spectator and spectacle. As the adult Alison interrogates her own memory, seeking answers following her father’s suicide, the action takes on a new context with the revelation that he was a closeted gay man.

In order to figure out how that dynamic worked, “Fun Home” had to approximate the actual home as much as possible. “[In] this play, more than anything I’ve ever written, the dramaturgy is in the staging,” says Kron. “The scene has action because you’re watching this character watch it. That’s hard to remember on the page. You’ve got to actually picture it. At a certain point you can’t know until you put those characters in space.”

A team of intelligent performers became essential to the process, as well as attention to detail from director Sam Gold. “These actors are very generous with me,” Kron says of the cast. “There were some scenes that were written up until the last minute. We wrote the end of the show on its feet, basically.” Beth Malone, who has played the adult Alison throughout several different interpretations of the character, demonstrated the importance of being flexible in the rehearsal room. Kron praises her “willingness to give her all to bad writing—seriously! We had to do so many bad versions so we could be like, ‘OK, that moment works, let’s hang onto that moment.’ ”

Now that the show’s development is officially over, will they miss the endless tinkering? “No, I’m good,” responds Tesori. Much like the separation between father and daughter in this musical, there’s an inevitable separation of creator and creation that comes with its own cathartic release. “You don’t finish a work, you abandon it,” she says with a laugh. “It’s sort of like a kid. You call, they write. You text. You see what they’re doing on Facebook.”

Jack Smart
Jack Smart is the awards editor at Backstage, where he covers all things Emmy, SAG, Oscar, and Tony Awards. He also produces and hosts Backstage’s awards podcast “In the Envelope” and has interviewed some of the biggest stars of stage and screen.
END_OF_DOCUMENT_TOKEN_TO_BE_REPLACED