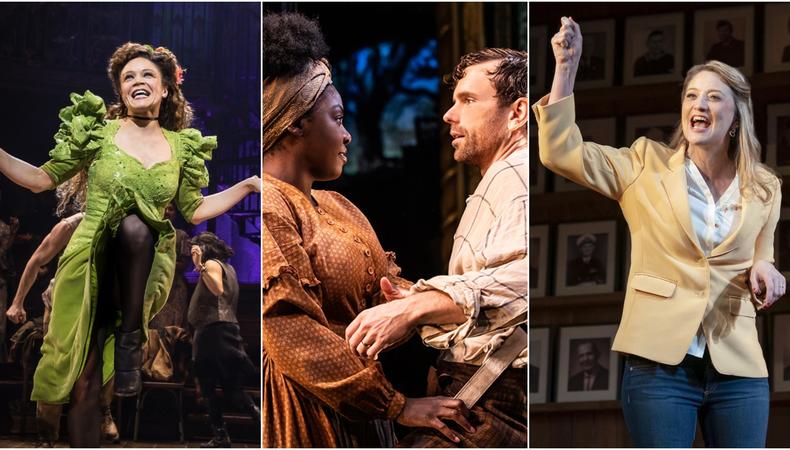 Even if you don’t know Jim Nicola’s name, you know the titles: “Rent,” “Once,” “Hadestown,” and, in the past year alone, “What the Constitution Means to Me” and “Slave Play.” As artistic director of Off-Broadway institution New York Theatre Workshop, which celebrates its 40th anniversary this year, Nicola has been at the helm for decades, ushering some of the most seminal new works—and new voices—of American theater from the frays into its main (and mainer) stream. Since Day 1, Nicola’s mission to create work that impacts the field with the resources at hand has not changed, however, its manifestations have.

In recent years, the East Village establishment has comparably become the theater equivalent of film’s A24, the independent distributor of awards contenders. That is to say, it has established itself as a bona fide Broadway hit-maker, launching actors, writers, and directors to the forefront of the form along the way—here’s how.

“Artistic director” is a title we hear often but is in some ways nebulous; can you describe what your role actually is?
I work with the board to carefully keep us on track with what our mission is. So, either we measure what we’re doing and keep consistent with the mission that we’ve adopted, or [we ask], Do we need to revise the mission to include this new idea that we’ve got? In the biggest sense, the managing director is the person who figures out the “how”—how we do it—and the artistic director is doing “what” and “why.”

I want to start with the notion of New York Theatre Workshop as an incubator for Broadway. What do you feel is its current relationship to the more mainstream tides of theater?
It’s what’s happening and has happened to us. When I first got here in ‘88, there was a board retreat. It was me, the managing director, and the board in this group of maybe 10, to find a way forward together: “Let’s figure out what we want to do!” A question that was asked was, “What do we want New York Theatre Workshop to be? What impact do we want it to have?” What was exciting to me, as a young person playing the role of artistic leader for the first time, still figuring out what the hell it meant, was thinking the answers to those questions would be things like, “We want to see plays move on from our theater to Broadway”—a real measurable success. It would be about bigger venues, bigger noise, more money coming in. Overall, the dominant idea was, “We want to impact the field. We want to shift the aesthetics, the dialogue, the bigger conversation, and the art form.” I have never not remembered that and never not thought about that in these 32 years I’ve been here. It’s the touchstone of our mission. Out of that, things have had an incredible impact and there’s been a need for them to [subsequently] go to a larger venue so more people could see them and encounter them. That is what we try to live with.

So is it fair to say you never mount anything with the intent of, “This is a stepping stone to Broadway”?
We’ve run into problems in the past when artists come and knock on our door and want to work here and we start down the road, and I can feel, “Oh, their mind is on what it’s gonna look like when it gets to a bigger theater.” And they’re casting it, they’re writing it, they’re designing it with that in mind, opposed to, “How do we as a collective of artists gather together here on East 4th Street and make the most beautiful thing with the resources we have and the space we have? Because there’s a beautiful version of this thing within those given circumstances.” I often find that’s my role to remind them: Let’s get it right here, and then we can go from there. But if it’s not right here, if it doesn’t feel organic in occupying this space, it’s not gonna go. Also, specifically [speaking to] the Broadway thing, the most dangerous thing for artists is that the whole tradition and mythology of what Broadway is—which is beautiful—embathes their mind and they start to think either that we have to make the play fit those ideas and aesthetics, or they’re on the opposite side which is, “We want to defy those things, we have to revolt against those things.” I remember when I read the first draft of “Rent,” and I saw Jonathan [Larson] grappling with just this; he described that there was a rock band on the stage and the classic Broadway orchestra in the pit. And I thought, “Well, that excites me right there because he’s actually embracing that challenge.”

You have been with this institution through major cultural and societal shifts. Have you seen New York Theatre Workshop’s purpose or place shift over time, as well?
I’m of the Baby Boomer generation and that team of artistic leaders is now coming to the end of our moment and handing off to the next generation of leadership. As we’re doing that, it’s coinciding with major tectonic shifts in the culture, so I’m thinking a lot about this. I’m thinking about when I started, all the great ideas I was so on fire about back then. The Boomers, we were inheriting a relatively new concept and set of structures. Not-for-profit theater, the real grassroots of it was the 1960s. If you want to look really honestly at what took place over the next 40 years, the Boomer generation tried to figure out how to keep those structures alive, how to make them survive. There hasn’t been a lot of room to take a minute to breathe and say, “Well, what should it be? Where do we want to go? What do we want to add to this? How are we going to change it?” It was largely an operation of survival. Now, the ground beneath us has shifted so immensely that I think it’s catching up with us, and what we’re handing off to a newer generation of leadership is very unstable structures. One little earthquake and they’re gonna collapse. It’s a whole new thing to be reinvented, and we’re not leaving them with a good, solid legacy. That’s my honest assessment of it.

What then would you say is the honest path forward for this new generation of theater-makers?
I don’t know, and I think you should be suspicious of anyone who says they do. It’s not a blanket solution. I think we’re going to be in a period of essentializing. There’s too many theaters for not enough resources, so I think there’s going to be fewer. The only thing I can think of is that the new leadership is really going to have to figure out what a viable relationship between theater and the community is. The expectations of the culture have shifted. I think that’s the equation to really start with: What role does theater have for people? What does it mean? I feel there’s some optimism; the more people sit with their screens in their underwear in their living rooms and become more and more isolated or only engaged with other human beings in an artificial way, gathering together in a space for a live event is going to have more and more power. The challenge will be, How do you persuade people to leave their screens and come? How do you tell people they have to be in the room, at this time, or else they can’t have it? That is so against the tide. People want to watch whatever they want for free, 24/7, and they don’t want to have to sit with other people.

READ: The Cosmic Connections of the Women of ‘Hadestown’

But there is this group of up-and-coming voices challenging these very ideals you’re talking about. Are you saying a concrete reckoning is easier said than done?
I think it’s gonna be a systemic and structural question of, “How do we provide a theatrical experience?” But it’s also going to be about, “What is the experience we’re providing?” I feel like even the voices that you’re alluding to are still referencing time-honored, formal structures in their work. That’s gonna have to go soon, or at least be challenged and interrogated. I had the incredible good fortune to see the Japenese “Antigone” at the Armory on Saturday night, and I’m still thinking about that. It was so clearly from another culture and another set of historical, cultural images and assumptions and sources. It was sort of “ancient Greek drama meets Japenese Noh theater.” The next night I went to the opening of “Slave Play.” Putting those two things together, they had such different places the makers were trying to reach. “Slave Play” is about asking, How do we in this broken society go forward with each other when we’ve not just ignored, but denied our history together? With the Japanese piece, it was, What is our soul? What is our spiritual relationship to the world? It’s this whole different idea. We have to be in this room and breathe the air together. We have to see this ancient story, and together we figure out what it means to us, but we do it through a ritual, and that felt so good and so different than what I’m seeing most of the time in American theater.

NYTW has launched the careers of countless emerging artists. In your words, why are new voices crucial for the vitality of the industry?
They are the forces that make an ancient art form live in the present moment. It’s their imaginations, their spirits that say, “Gathering together in a room to see something enacted is potent and powerful and necessary to the spirit animal that we are.” The given circumstances that each generation of animal inhabits change radically over thousands of years. We have to keep reinventing this ritual enactment to make sense and give meaning to people now on the planet, breathing the air together right now. They’re the ones that will lead us forward. They’re the voices and the spirits and the imagination that can do that: Connect the past to the present—and then into the future.

Casey Mink
Casey Mink is the senior staff writer at Backstage. When she's not writing about television, film, or theater, she is definitely somewhere watching it.
END_OF_DOCUMENT_TOKEN_TO_BE_REPLACED