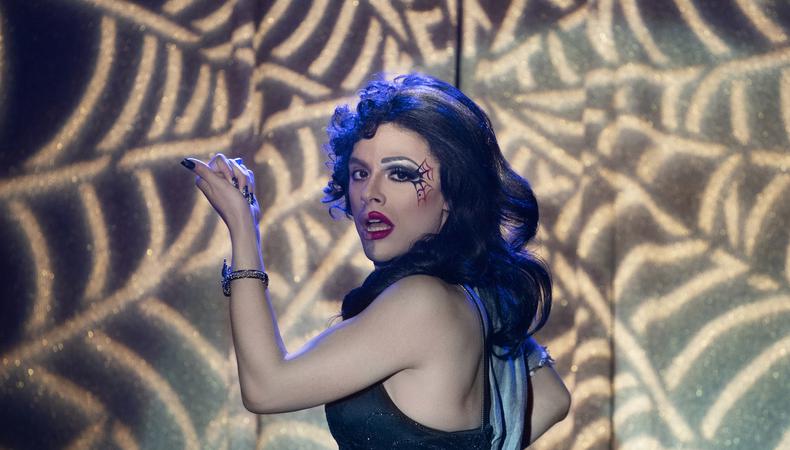 As if Jonny Beauchamp wasn’t already enough a fan-favorite scene-stealer on the CW’s new “Katy Keene,” last week’s musical episode had him as Jorge (a.k.a. Ginger Lopez) dragging it up in a recreation of “Kiss of the Spider Woman”—and he took us along for the ride with Backstage’s first-ever Instagram Live watchalong. Taking audience questions at the episode’s end, the 31-year-old actor, previously best known for “Penny Dreadful” and “Stonewall,” talked about preparing for the big episode and keeping morale up in today’s climate.

What’s the hardest thing about being a drag queen?
“The layers, cause it’s just so many layers of tights and stuff. And the tuck—the tuck is pretty tight, too. When you have to pee, you can’t really! That’s pretty tough about being a queen.”

How long did it take to become the spider woman?
“Four hours. You have to also understand we don’t get a lot of time for fittings and stuff like that, and sometimes we’re doing a fitting on the day or we’re doing a final costume adjustment with the choreography on rehearsal right before we shoot, and it takes time. So yeah: hair, makeup, costume, everything ready to go shoot in four hours.”

What’s the biggest challenge in taking on this role?
“Hands down, all of the prep work that goes into it before we shoot. All of the rehearsals for the numbers, the recording sessions. Sometimes we shoot a scene before we’ve actually heard the final mix. Like, I had recorded a number on a Sunday, and then I shot it Monday at 6 or 7 in the morning, [and I] hadn’t heard myself on it yet. So [I was] in makeup and stuff and had been listening to little mixes, but it ended up not being the same mix that we started shooting with! So I had to take a second and listen to it. That was wild.”

What is it like shooting “Katey Keene” with such a fun cast?
“It’s the best! Out of all the things I’ve done, I’ve actually been lucky, I’ve been on some really cool projects and I never had any major problems or anything. [But] we’re all actually friends, so that has been amazing. Coming to work—cause we’re doing long hours, sometimes 17 hours in a room together, the four of us. But it’s different when you get along and you never have any fuss or anything. We’re all on each others’ team, and I’m usually cracking jokes or doing little pranks and stuff. But the girls are such good sports. We’ve actually all been in contact, just like checking in and stuff, cause we love each other. It’s been amazing! I feel like the luckiest boy in the world.”

How have you been keeping morale up during this time of quarantine?
“What I’ve been doing, sounds corny, but I’ve been reading about stuff I really care about. I really love opera, so I got this book, this nerdy read. I also got this book on Shakespeare, I’ve been looking at that. [It’s a] good time to just be alone in quarantine [and] do a monologue. Try something different. Do a Lady Macbeth monologue, why not? We got nothing but time. That’s what I’m doing. [And I’m] discovering new music! That new Jhené Aiko album is really hitting home for me right now.”