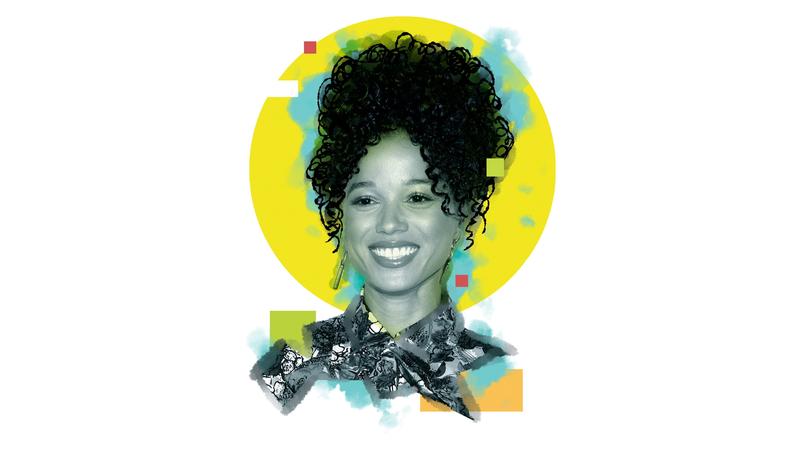 After beginning her career in commercials, Alisha Wainwright moved from San Francisco to Los Angeles to continue acting, soon landing a role on the Freeform fantasy series “Shadowhunters.” Now, on Netflix’s “Raising Dion,” Wainwright leads the show as Nicole, a single mother raising her son, Dion (Ja’Siah Young), who develops superhero abilities after the death of her husband, Mark (Michael B. Jordan). Here, Wainwright talks to Backstage about the differences between commercials and working in film and TV while emphasizing the importance of mentorship.

How did you first get your SAG-AFTRA card?
I got my SAG card doing commercials. I think it was an Apple commercial for their Maps app.

How did you land your first agent?
I was living in San Francisco prior to moving to L.A., and one of my classmates in my acting class up there told me how to put together a package email: You’re going to email this agent with your headshot, your résumé, a little bit about yourself, and some ideas of how they could brand you. I put together this email and blindly emailed an agency, and they responded and they had me come in and have a meeting. They did mostly commercial work [in the Bay Area], but it was a great, safe space to learn about the industry.

READ: How to Get an Agent

Tell us about your first day on a professional set. How do film and TV sets differ from commercial sets?
I feel like a commercial set teaches you how to be a good listener—how, often, it’s not really about your skills, it’s about how you look and how you look doing something with the product. This is kind of how I think about acting: The end goal is to convey a story. You would hope, as an actor, that your character development and your skill is what will help transcend the story, but sometimes it’s not about you. Sometimes it’s about something else and you’re supporting that. With commercials, it’s even more extreme. You’re in service to the story, which is to sell a product. You’re a vehicle to make sure that people see something or experience something. You get really good at listening, because sometimes it’s like, “Make this face and walk there,” and if you can’t do that because you’re not a good listener or you’re trying to make it about yourself, that director probably won’t work with you again. I’ve had a really lucky experience of having a lot of repeat clients. I’m an advocate for work; anything that gets you on a set, learning and being appreciative of being able to do that in any capacity, is a good thing. Definitely try to learn where you can—and I think I’ve learned a lot from commercial sets. They’re very different. Commercial sets, there’s more money in it, it’s kind of fun and casual, whereas a TV set is a little more dialed in; there’s more of a system going. In film sets, they can be crazy because you’re only shooting in 10 days.

What advice would you give your younger self?
The most valuable thing I did for myself was align myself with someone who I thought was a mentor. That person knew what IMDb Pro was, that person explained how to get my SAG card. Having someone to offer advice, someone who’s directly within your circle, is valuable. You’re actually seeing the things you would like to have happen for yourself happen to someone next to you. It creates that [feeling] of, “Oh, my dream is possible.” For me, it was having my friend who was, at the time, doing commercials. Being able to spend time with him and learn how he got to be where he was made the steps toward where I wanted to be more realistic and manageable. Take an acting class, and if you feel a genuine connection to someone who has a little more of a résumé than you do, use it as a learning opportunity to grow with that person, try to see what they did, and try to emulate that.

Was having that mentor relationship helpful when you were based in San Francisco? What advice would you have for other actors outside of the L.A. bubble?
When you’re outside of L.A., there are certain benchmarks—at least where I went to acting school—that our teacher said we had to hit. We had to have a certain amount of money in the bank, we had to have a certain amount of time on our demo reel, we had to have our headshot and everything put together for a package, so when you move to L.A., you’re moving with your arsenal; [you’re] ready to be very proactive. I would encourage anyone thinking of moving to L.A. to do those things. Being strapped for cash and not having any direct leads to people who can help you achieve your goals, I can’t imagine what that must be like. People do it all the time and are successful, but if you can be proactive at home, that’s what I suggest. There’s so much you can do for yourself where you are: Find an acting class, find like-minded people. Having a sense of community in this industry is one of the most meaningful things to me. If you can find that wherever you are—in your local community theater or acting class—that’s probably way more to your advantage.

What was your first headshot like?
I traded this local wine photographer a case of wine for a couple of headshots. He did mostly profile photos for people in corporate businesses, but I showed him examples of headshots and he took photos of me [in that style]. And I gave him a case of wine. I was living in Sonoma at the time. This was the phase in my life when I straightened my hair regularly. My hair is naturally very curly, but I thought straight hair was the look. So I had straight hair, and [my headshots] looked very professional, like a corporate photo. At the end of the day, it was an opportunity to get my foot in the door at the agency in San Francisco, [where they] encouraged me to get new ones.

READ: Everything You Need to Know About Headshots

What’s the wildest thing you ever did to get a role?
I have gone into intense research. I did a police ride-along in West Hollywood to prepare for an audition for a police officer for a television show six years ago. At the time, if you were a resident of West Hollywood, if you gave them your driver’s license and they did a general background check and you came up clean, one of their sheriffs would let you accompany them for the day. So I did that for the day and did a whole beat with him, went to answer some calls. He was also a detective, so we were talking about his long-term detective work. It was so informative, not only about what it’s like to be a police officer, but also my own community, the types of crime that were happening in West Hollywood. I found it so fascinating. Was it necessary to do that for the role? No. But I do think it informed me a lot about the type of lifestyle that character would [have]. I get more into the weird prep work than I get into showing up in a crazy costume. That’s not really my style.

What is your worst audition horror story?
Very early in [my career], I auditioned for a commercial for McDonald’s. They were running so late, I was waiting there for an hour and I had a bag of almonds in my purse, which is basically like eating a bag of salty crackers. I had so much food in my teeth and my mouth was so dry and I didn’t have any water. Then they called me in. It was a callback, so it was the director and the ad people in the room. Every time I tried to talk, I kept choking. They were like, “Are you OK?” and I’m like, “Yeah, no, no, I’m fine.” Then they’d ask me a question and I’d choke. I had to leave, get water, and come back, and then they talked to [me] about McDonald’s and I went into this whole story about how I thought Chipotle was so much better. Everything was so bad. They were not impressed by me. I made a little bit of a fool of myself. I’ve definitely had auditions where they’ve caught me in a moment where I’m super hungry and I can’t remember my lines. I’m very affected by whether I’m hungry or not, so I always have a snack in my purse when I go to an audition, because sometimes you show up and you don’t realize you’re hungry until you’re there waiting.

What performance should every actor see and why?
I am going through an old film catalog at the moment. I don’t necessarily recommend that for someone just getting into it, because it might put them off. [Laughs] I feel like so many performances mean different things to different people. For me, I gravitate toward stories about family and about black families, stories like “Fences” and “A Raisin in the Sun.” They resonate so much with me because you develop so many types of relationships within that story. That’s the most interesting part of acting, to be able to have very specific relationships with very fleshed out characters based on not only their personal perspectives but the relationship they share with people.

What has your role on “Raising Dion” added to your acting skills? It’s a unique mother-son relationship.
The whole experience has taught me an appreciation for people who work this much in television. I worked a lot, I was on set a lot. Me and the young boy who played Dion, Ja’Siah, he and I worked so much. From a purely clinical [angle], I learned valuable self-care. I learned about what works for me to stay afloat. The character itself was super fascinating because I was raised by a single mother; I can understand the trials and tribulations of a woman trying to raise a child by herself. That alone is complicated and difficult. Then you put this [concept] of the supernatural on it, and that takes it to a totally different level. If you can see the struggles that your mother went through raising you, you will understand and empathize with Nicole and how she’s trying to juggle keeping life fun and interesting for her son while also trying to protect him not only from himself but from other people who might be afraid of him if they learned what he can do.