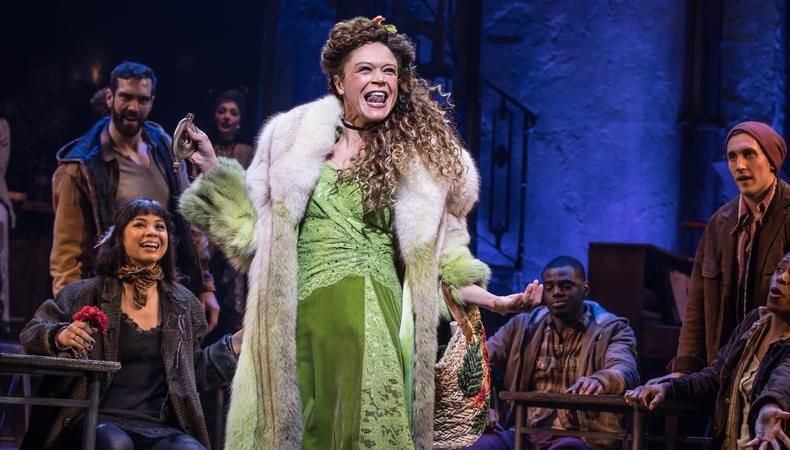 Curtain up on the official 2019 Tonys season! Announced early on the morning of April 30—just north of the lights of Broadway—two-time Tony winner Bebe Neuwirth and two-time Tony nominee Brandon Victor Dixon unveiled the nominees for the 73rd Tony Awards.

And there were plenty of shockers to go around. On the best musical front, “Hadestown” led with 14 nominations, while “Tootsie” notched 11. They are joined by “Ain’t Too Proud,” “Beetlejuice,” and “The Prom,” vying for the coveted best musical trophy. Turning to the plays, “Choir Boy,” “The Ferryman,” “Gary,” “Ink,” and “What the Constitution Means to Me” will battle it out on the evening of June 9, with “The Ferryman” leading that group with nine nods.

The morning’s biggest nail-biter came in the form of the leading actor in a play category, a mega-packed group that ultimately recognized Paddy Considine for “The Ferryman,” Bryan Cranston for “Network,” Jeff Daniels for “To Kill a Mockingbird,” Adam Driver for “Burn This,” and Jeremy Pope for “Choir Boy” (the latter is a double nominee, also recognized for his featured role in a musical for “Ain’t Too Proud”). Notably, though Daniels was nominated, “Mockingbird” itself—largely considered a frontrunner—was not nominated in the best play category.

The leading actress in a play category, meanwhile, gave a nod to one of last year’s winners, Laurie Metcalf, in the political dramedy “Hillary and Clinton.” She’s joined by Annette Bening for “Arthur Miller’s All My Sons,” “The Ferryman” star Laura Donnelly, Elaine May for her work in “The Waverly Gallery,” “Bernhardt/Hamlet” star Janet McTeer, and “What the Constitution Means to Me” star Heidi Schreck (a double nominee for that play, which she wrote).

On the musical side, leading ladies Stephanie J. Block of “The Cher Show” and Kelli O’Hara of “Kiss Me, Kate” are joined by two stars of “The Prom,” Beth Leavel and Caitlin Kinnunen, as well as “Hadestown” star Eva Noblezada.

As was previously announced, Judith Light (a two-time Tony winner herself) will be presented with this year’s honorary Isabelle Stevenson Award, recognizing her humanitarian work in the fight against HIV/AIDS and her advocacy for LGBTQIA rights. Additionally, a trio of Lifetime Achievement in the Theatre awards will be given to Terrence McNally, Rosemary Harris, and Harold Wheeler. TheatreWorks Silicon Valley will also be recognized with the Regional Theatre Award.

The 2019 Tony Awards, honoring the year’s best on Broadway, will be held June 9, returning to its home at Radio City Music Hall. Tony winner James Corden will also return as the evening’s emcee, with the entire ceremony broadcast on CBS.

Check out the full list of Tony nominees here, and be sure to follow along with Backstage over the next six weeks for interviews, features, and more with all your favorite Broadway babies.

Casey Mink
Casey Mink is the senior staff writer at Backstage. When she's not writing about television, film, or theater, she is definitely somewhere watching it.
END_OF_DOCUMENT_TOKEN_TO_BE_REPLACED