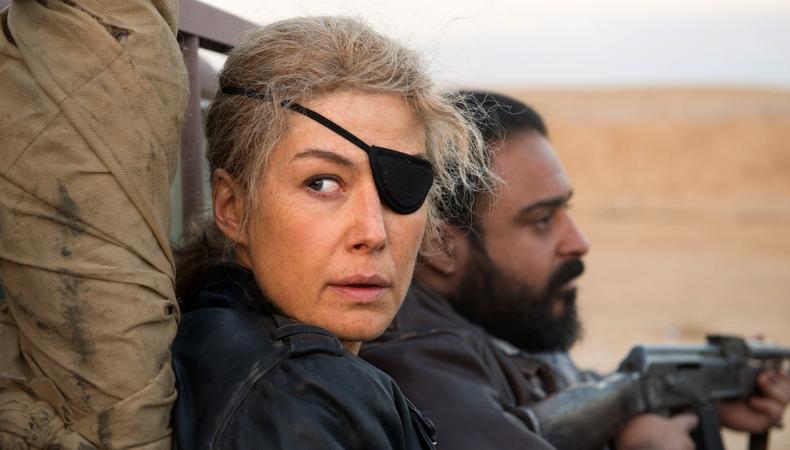 Editor Nick Fenton has dozens of credits to his name, but it was the uncharted territory of “A Private War” (in theaters now) that drew him to the Rosamund Pike–starring drama. Fenton spoke with Backstage about the film’s real-life parallels, the enormous responsibility that comes with being a project’s first audience, and what he wishes all actors knew about performing on-camera.

What does an editor actually do?
On a very simple level, we receive all the material, all the footage and picture from the shoot, and we try to make sense of it. We try to make the most clear, emotional, compelling story that we can from that footage. Obviously, that’s in collaboration with numerous other people, including the director and the sound team and everyone who’s come before us who is involved in the shoot.

So the editor works very closely with the director.
Very closely. Essentially, the editor is the first audience of the film even before the director comes into the room. We are feeding back notes and opinions about whether or not something is working, be it a performance, the cinematography, [or] the sound. With that comes enormous responsibility and making sure that we get everything we need to tell the story and also to make sure that it’s good—you’re the first critic and you’re the first audience. I take that very seriously. The relationship with the director is [one] of trust.

How did you get into editing?
I, like anyone, had ambitions to be a director, and someone told me once, “If you want to direct, the place you’re going to learn the most about filmmaking is the cutting room because it’s the culmination of everyone’s efforts.” So that’s what I did. I became an assistant editor and then studied at a place called the National Film and Television School just outside of London and specialized in editing. I think I’m just very suited to the diplomacy in the cutting room.

READ: How to Become Your Film Editor’s Best Friend

What compelled you to “A Private War”?
The fact that it’s a story about a real person and the essence of telling that story faithfully. Having an interest in the world, in current affairs, and the fact that there are still so many wars going on in the world, [I wondered] how I could shine a light on that…. There are all those things you hope that you can express in your professional life, that you can try and articulate. Ideas and principles that I hold dear were all wrapped up in this film, and that very rarely happens.

As an editor, is it usually apparent to you when you’re watching footage of a less experienced actor?
During the process of making a film, there are actors who have varied techniques, and so you’re very aware of whether they’re used to performing in front of the camera or on the stage. It’s often a process [for the actor] to learn how little they have to do in front of the camera. When I am watching a performance, I often look for the more subtle and very delicate moments of a performance. When you’re judging an actor’s performance in a scene, you have an enormous amount of power in becoming them. The really great actors give you as much variety as they possibly can, and they very often know themselves when you’ve got it, and you know when they’ve given it to you. I think less experienced actors tend to try a little too hard and overperform.

Is part of your job trying to piece together the actor’s best possible performance?
Absolutely. They are the vehicle in which we tell that story and [through which] we feel that story, so their emotional integrity and their emotional truth is everything. When I’m watching footage, I spend quite a lot of time writing thoughts down about those performances and that first viewing, that first impression. Even though it’s the raw material and even though you’ve got the crew shouting different things around that performance, that first viewing of watching that performance is so crucial because that’s the most intuitive moment. You know from that first impression whether or not that emotional integrity is there.

What’s your No. 1 piece of advice for someone hoping to become an editor?
Choose people and projects that you really believe in, because there’s nothing worse than giving your heart and soul to something that you don’t believe in. Just find common ground with your collaborators. Projects come to you in a whole different array of circumstances, and sometimes you read a script and it just doesn’t gel, but then sometimes there are elements within the script or the team involved in it and it just all makes sense.

Casey Mink
Casey Mink is the senior staff writer at Backstage. When she's not writing about television, film, or theater, she is definitely somewhere watching it.
END_OF_DOCUMENT_TOKEN_TO_BE_REPLACED