Freema Agyeman’s Best Tip for U.K. Actors to Get Their Start 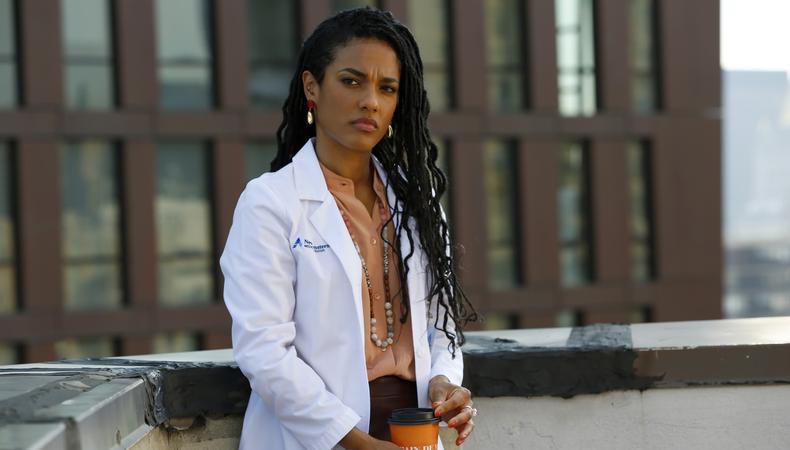 For an actor who—at least to American audiences—has cut her teeth dealing in the fantastical worlds of “Doctor Who” and “Sense8” (and yes, the high-fashion world of “The Carrie Diaries”), Freema Agyeman admits that playing the straight-laced Dr. Helen Sharpe on NBC’s new medical procedural “New Amsterdam” is a bit out of her comfort zone. But that’s what she looks for. The British talent recently sat with Backstage to talk about it.

Agyeman relied on advice from Bellevue Hospital’s real-world head of oncology and hematology, Dr. Mary Lynn Nierodzik.
“This bubbly, effervescent, smiley woman opened the door [when I visited Dr. Nierodzik], and from that minute on, I was relaxed and I could ask every single ridiculous question that I had. She was telling me stories about patients, and we were both crying. They just have this incredible village-like philosophy over there where they support each other because you need to be able to offload. You cannot take it all onboard; it will break you. But you have to stay open and empathetic enough to treat people like people. One of my silly questions was, ‘How do I behave like a doctor?’ And she was like, ‘It depends on who you have in front of you. What are their needs?’ You roll with your patients, and that was really freeing as an actor because there’s no right or wrong way.”

Helen is unlike anything she’s done before.
“I don’t tend to gravitate toward characters like Helen Sharpe, who’s very contained, very controlled, very authoritative. But then I was talking to my agent and the creators, and they’re like, ‘She’s seemingly so. She’s possibly a bit repressed, and there’s so much else going on that you think she is one thing, and then we get to explore.’ Now that’s interesting. I can actually go do something with that. So this is one of the jobs where I’m not going overboard with notes. I’m kind of discovering her as we go. Again, that comes from other people’s input, as well—that can be the creative, that can be the directors, or it can just happen in a moment.”

Her advice for actors? Have your materials at the ready.
“Practically, you need to get things like a show reel together, your headshots, and your CV. You can go to drama schools, and they’ll always be doing special projects or end-of-year shows, and they need people, and you can just go and offer your services for a cut of the reel. And if you can do a few of those, you can compile a show reel, [then] you have three or four clips of [high-quality] production stuff. Sure, you haven’t done anything on television yet, but you need to start!”

Being a good auditioner means balancing in-person and self-tapes.
“Auditions are terrifying! And so if someone said to do a self-tape or to go into the room and meet the producer and the director, I’d be like, ‘Self-tape!’ I can just stay in my pajamas from the waist down and put a bunch of mascara on to be safe in my home and do as many takes as I want. But sometimes that’s a downside, as well, because if you go in and you know you only have four minutes and your adrenaline’s pumping, magic can happen. Direction [in the room] can really help. Sometimes if you’re in a room on your own with a camera [to self-tape], 12 hours later, you’re going, ‘It’s still not right!’ You have to be careful you don’t go down a rabbit hole in that way and kind of get lost in all of that.”

She’s enjoyed her sci-fi work because it’s rooted in humanity.
“I’ve been incredibly lucky because both of the sci-fis I’ve done have been rooted deeply in humanity. I mean, whether you’re talking about the peace and acceptance and tolerance and representation and diversity in a parallel universe on another planet far, far away, the messages are all still there in ‘Doctor Who.’ Or whether you are part of something that is a truly unique representation of diversity—‘Sense8’ was such a movement, just the fact that you could be a part of something that’s so brave and so relevant. And then you get to add your creativity on top of the pile.”

Benjamin Lindsay
Benjamin Lindsay is managing editor at Backstage, where if you’re reading it in our magazine, he’s written or edited it first. He’s also producer and host of a number of our digital interview series, including our inaugural on-camera segment, Backstage Live.
END_OF_DOCUMENT_TOKEN_TO_BE_REPLACED