How Michelle Williams Learned to Dance on ‘Fosse/Verdon’ 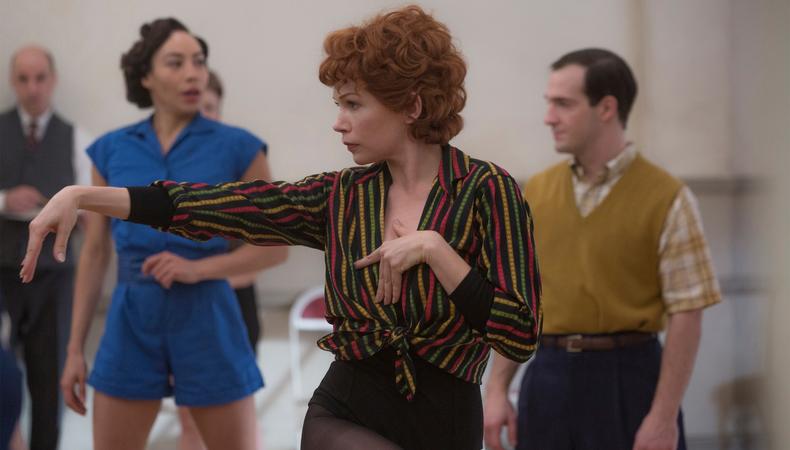 For FX’s new song-and-dance drama “Fosse/Verdon,” Dana Moore had the upper hand—she didn’t just know the titular duo (Bob Fosse and wife-collaborator Gwen Verdon) personally, she worked closely with them at the height of their stage and screen careers. That’s why producers—among them Thomas Kail, Steven Levenson, and Lin-Manuel Miranda—enlisted her talents for the biographical miniseries. From assisting star Michelle Williams with Fosse’s unmistakable style to how she links dancing to acting, Moore shares her firsthand insight on nailing your next five-six-seven-eight.

How did your path first cross with Bob Fosse’s?
I grew up in the Pittsburgh area, and I moved to New York on a scholarship to American Ballet Theatre right out of high school. They said we couldn’t take lessons from other people, so I started sneaking out and taking [classes at] Luigi’s [Jazz Centre]. I started auditioning, and not too long into that I got my Equity card from a show that never made it to Broadway called “How’s it Poppin’,” but we went out on tour. I actually met and kind of socialized with Bob Fosse, but I didn’t get hired by him until I went in as a replacement in the show “Dancin’.” I did a bunch more Broadway shows, but my next Fosse show was the revival of “Sweet Charity” in the ’80s, with Debbie Allen playing Charity. I [played] the ponytail girl in that.

And how did you come to work on this series?
I have been aligned with the Verdon Fosse Legacy, which was begun and is upheld by Nicole Fosse, their daughter. I was just asked to be a part of that and do master classes, reconstructing material with a couple of other Fosse alums who had worked with them directly. It was because of that, but it’s also because I did the show “Fosse” on Broadway, and [“Fosse/Verdon” choreographer] Andy Blankenbuehler was one of our dancers. We’ve remained friends since, and he knew that I was with the Legacy, and he called me up and said, “Do you want to be a part of this? It’s being choreographed by me, but anything that is going to be real, [replicated] material, we want others to reconstruct it who are reputable.”

A large part of your role on the show was working with Michelle Williams. What was that like?
She’s so amazing and is the hardest worker on the planet. She came into this with very little understanding of Fosse style, and as a non-dancer, really—same with Sam Rockwell [who plays Fosse]—and she worked very, very hard. She was a sponge. Initially, we had to find our way with each other because she’s coming from a whole different world, but we very quickly found our way. If I didn’t already have her on a pedestal, I do now. She’s this wonderful person who is just a mom and an incredible actress, who was able to use that gift to become a dancer.

Is it a full-circle moment to be revisiting the material in this way?
Yes, one number I revisited was “Big Spender” [from “Sweet Charity”]. At first, I couldn’t help but think of the experiences I had had rehearsing it with Bob and with Gwen, but it very quickly took on a whole different life. Reconstructing it, I had to learn what all the characters do, but it was also just getting into that world. My whole experience with it just kind of went into the background and it quickly became about reconstructing it as it was originally constructed.

Since you are an experienced teacher, how do you work with performers who are perhaps more comfortable as actors than they are as dancers?
That is the role I played with Michelle and Sam, for sure. The thing about Bob’s work—thank goodness—is that it is coming from an acting point of view. Nothing is arbitrary, so there is a connection, not just in the head but in the body. There is a connection that is very easy to describe and to have a person who is not really a dancer understand. Mr. Fosse talked about how “below the belt” is where everything comes from, that’s the furnace that heats everything. It somehow is easier to talk about a particular move if you know that it’s coming from there. There are basic structural things that are Fosse style. His port de bras go elbow, wrist, hand, and once you establish that, every time you get to a port de bras you go, “Here’s another version of elbow, wrist, hand.” I think an actor really gets that, maybe even more than a dancer initially, because an actor is talking about something being organic: You can’t move until you have to, or you can’t say that line until you have to, and that is definitely something that I use, even in my classes today—not just with someone who is not necessarily a dancer. [I say,] “Let it do you.” Once you have the structure of that step and you know it, then it happens to you. Don’t show me what it is, don’t muscle it. It has to happen because the music is making that happen.

In those terms, it does sound more like acting. Did Fosse instill that understanding?
Yes, I got that from working with Bob and Gwen—I keep saying Bob and Gwen [and not just Bob], because the instances I worked with Bob Fosse were all instances that Gwen Verdon was a part of. In “Dancin’,” she was the dance supervisor when I went into the show, and in “Sweet Charity,” she was there right next to Debbie Allen showing her how to do it. It was so amazing. And working on [this series] and working with that team of [director] Tommy Kail and Andy Blankenbuehler and [showrunner] Steven Levenson, they have absolutely done this right.

Casey Mink
Casey Mink is the senior staff writer at Backstage. When she's not writing about television, film, or theater, she is definitely somewhere watching it.
END_OF_DOCUMENT_TOKEN_TO_BE_REPLACED