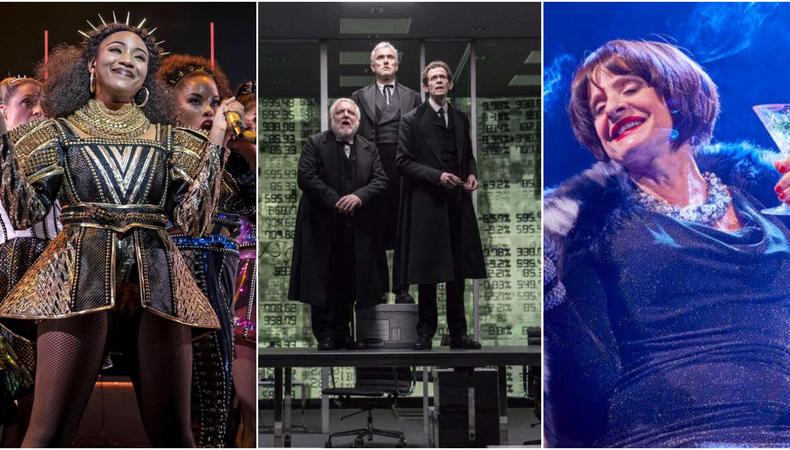 Spring doesn’t actually arrive in New York City until April, but the spring Broadway season does so much earlier. In fact, by the time March hits, a number of new plays and musicals will have raised their curtains, all primely positioning themselves for Tony Awards eligibility cutoff on April 23. And this season is a particularly robust one, with big stars (Laurie Metcalf, Armie Hammer, Sam Mendes), big titles (“The Lehman Trilogy,” “Six,” “Mrs. Doubtfire”), and even one big royal name (“Diana”). You may need a hand keeping them all straight—which is where we come in. Here’s your guide to the 17 plays and musicals opening on Broadway this spring.

“The Minutes”
Previews: Feb. 25
Opens: March 15
Theater: Cort Theatre
What to Know: With the Steppenwolf production of “The Minutes,” Tracy Letts becomes one of the few playwrights in history to have two new plays debut on Broadway in the same season—but unlike his first outing last fall, “Linda Vista,” he’ll also star in this one. Directed by Amy D. Shapiro, the cast will additionally include Armie Hammer, Blair Brown, and Tony winner Jessie Mueller. (Get tickets here.)

How Martin McDonough Casts His Actors

“The Lehman Trilogy”
Previews: March 7
Opens: March 26
Theater: Nederlander Theatre
What to Know: After its smash-hit run Off-Broadway last season, Oscar winner Sam Mendes directs this three-hour epic about three brothers, the American Dream, the financial collapse of 2008, and everything in between. Written by Italian playwright Stefano Massini, it’s been translated for English-speaking audiences by Ben Power. (Get tickets here.)

“Who’s Afraid of Virginia Woolf?”
Previews: March 3
Opens: April 9
Theater: Booth Theatre
What to Know: Because it’s not actually a Broadway season without her, two-time Tony winner Laurie Metcalf returns to the Great White Way in a revival of Edward Albee’s drunken drama, “Who’s Afraid of Virginia Woolf?” Under the direction of Joe Mantello, Metcalf will be joined in the four-hander by Rupert Everett, Russell Tovey, and Patsy Ferran. (Get tickets here.)

“Plaza Suite”
Previews: March 13
Opens: April 13
Theater: Hudson Theatre
What to Know: In keeping with the recent trend of married couples starring opposite one another onstage, Sarah Jessica Parker and Matthew Broderick team up for this Neil Simon laugher under the direction of John Benjamin Hickey. What more could you ask for from a night of theater?

“American Buffalo”
Previews: March 24
Opens: April 14
Theater: Circle in the Square
What to Know: As sure as the sun will rise, David Mamet will be produced on Broadway. This time around, his “American Buffalo” will be placed in the worthy hands of Oscar winner Sam Rockwell, Laurence Fishburne, and Darren Criss, with Neil Pepe directing.

How Debra Messing Learned to Advocate for Herself

“How I Learned to Drive”
Previews: March 27
Opens: April 22
Theater: Samuel J. Friedman Theatre
What to Know: Paula Vogel’s Pulitzer Prize-winning “How I Learned to Drive” arrives on Broadway for the first time, reuniting its original Off-Broadway stars, David Morse and Mary-Louise Parker. (The play will mark Parker’s second on Broadway this season, having previously led the fall’s “The Sound Inside.”) Mark Brokaw directs this new production. (Get tickets here.)

“Girl From the North Country”
Previews: Feb. 7
Opens: March 5
Theater: Belasco Theatre
What to Know: After a buzzed-about run at the Public Theater, “Girl From the North Country” strums its way uptown. Though utilizing the Bob Dylan songbook as its score, the story is an original one, written and directed by Conor McPherson and starring Mare Winningham. (Get tickets here.)

“SIX”
Previews: Feb. 13
Opens: March 12
Theater: Brooks Atkinson Theatre
What to Know: After runs in London, Boston, and Chicago, the sensation finally makes its way to Broadway. “SIX,” the pop musical about the six wives of Henry VIII, features a book and score by Toby Marlow and Lucy Moss, with Moss pulling double duty as director. (At 26, she becomes the youngest woman to ever direct on Broadway). Best of all: Front to back, the musical runs 80 minutes. (Get tickets here.)

“Diana”
Previews: March 2
Opens: March 31
Theater: Longacre Theatre
What to Know: A brand new musical about the Diana who requires no last name, this royal tuner stars newcomer Jeanna de Waal in the title role, under the direction of “Come From Away” Tony winner Christopher Ashley. The book is by Joe DiPietro, with an original score courtesy of David Bryan. (Get tickets here.)

“Mrs. Doubtfire”
Previews: March 9
Opens: April 5
Theater: Stephen Sondheim Theatre
What to Know: Following last season’s “Tootsie,” another beloved film of yore about a struggling actor whose cross-dressing antics lead to more antics is getting the musical treatment. Under the direction of Jerry Zaks, “Mrs. Doubtfire” comes courtesy of brothers Wayne and Carey Kirkpatrick, with Tony nominee Rob McLure in the title role. (Get tickets here.)

“Flying Over Sunset”
Previews: March 12
Opens: April 16
Theater: Vivian Beaumont Theater
What to Know: Well, it’s about LSD. More specifically, this new musical is set in the 1950s and tells the tale of three real-life figures—Clare Booth, Cary Grant, and Aldous Huxley—who each dabbled in the psychedelic drug. The pedigree of talent is as serotonin-inducing: Carmen Cusack, Tony Yazbek, and Harry Hadden-Paton star under the direction of James Lapine (who also wrote the book), with Tom Kitt having penned the score.

“Sing Street”
Previews: March 26
Opens: April 19
Theater: Lyceum Theatre
What to Know: “Sing Street” is already shaping up to be this season’s little show that could, having announced a Broadway transfer while still in the midst of its run at New York Theatre Workshop late last year. Based on the beloved cult film about a group of Irish teens who start their own band, this musical about music is directed by “Indecent” Tony winner Rebecca Taichman, and features music by Gary Clark and John Carney with a book by Enda Walsh.

Casey Mink
Casey Mink is the senior staff writer at Backstage. When she's not writing about television, film, or theater, she is definitely somewhere watching it.
END_OF_DOCUMENT_TOKEN_TO_BE_REPLACED